We at A Book of Cookrye, always up for getting produce in bulk, often find that we have squishy fruit in the refrigerator. It's still perfectly good to eat, but would you want to eat grapes that look like this? 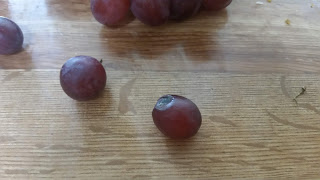 I know it's a very first-world-problems sort of lament: "Oh no, my grapes that were flown from a farm across the planet are slightly squishy!" But we at A Book of Cookrye see produce past its prime as an opportunity to experiment. We're not allowing anything to go in the trash, but since these grapes were no longer all that good anyway, why not create something with them?

Have you ever noticed that almost no one bakes with grapes? Flip through the fruit pies in any cookbook, and it is extremely unlikely that any recipe has grapes in it, whether on their own or as a part of a mix of fruits. I've seen a few recipes, mostly from the 1970s, that put grapes in meat recipes- usually chicken or pork. Why not try using grapes in that favorite way of using up squishy bruised fruit: Fruit crisp?
The last time we baked grapes, they didn't exude much juice in baking. And that's part of what we like about fruit crisp- all the flavorful juices that come bubbling out of the fruit as it bakes. So, we figured we would extract the grape juices before baking. We coated the grapes in brown sugar and spices, and put them in the refrigerator overnight so the sugar would draw out the juice. We also cut them in half so the juice would draw out faster. 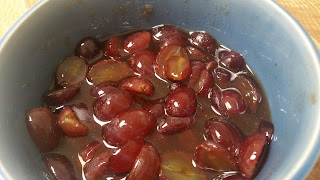 As you can see, the grapes gave out so much juice that they were swimming in it. You would think they'd be a lot softer and deflated, but when we ate one, we could barely notice any difference. The juice tasted a little bit like grapes, but mostly like brown sugar and spices. As much as I like brown sugar and spice, I was hoping there'd be a lot more grape flavor- like adding a few shakes of pumpkin pie spice to a jar of grape jelly.
But, what does one put on top of these grapes? Every fruit crisp needs... well... a crispy top. Since this small-scale adventure started off with avoiding waste, we decided to continue making pantry dregs into new creations.
Do you eat granola? If so, do you find (as we do) that you eat all the big pieces early on and then have a bag full of crumbs that just aren't as nice? 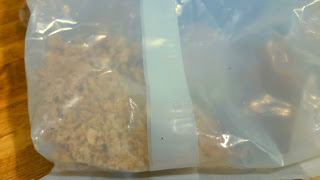 Again, there's nothing bad about this granola. It's just the sand and dregs that remain after everyone's eaten the good bits. It's even made of the same things, but just as more people want to eat cake slices than cake crumbs, no one really gets excited about putting pulverized granola sand on their yogurt. 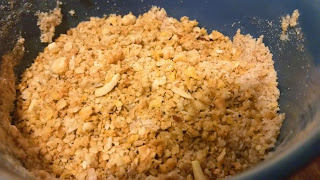 And so, we added the last of a stick of butter that no one was using (now this recipe has cleaned out the fridge, the fruit basket, and the pantry) and a handful of sugar to make some vague approximation of fruit crisp topping. 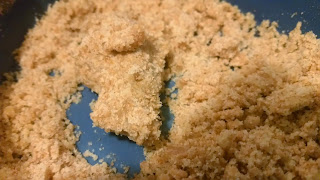 The result was dry and sandy. One might think that we're going to have horrible, powdery, crumbly sand on top of the fruit after we bake it, but I was thinking it was perfectly poised to absorb all the juice underneath it and turn into something magical. Besides, since it's mostly granola it's healthy-- as we all know, granola is totally healthy and not at all a sugary calorie bomb dressed up as diet food. Also, our fruit crisp topping was now cohesive enough to stay in lumps when you squeezed it in your fist. I took this as a sign that things were going right. I don't know why I thought its integrity when pressed together mattered, but it seemed auspicious anyway.
Incidentally, I used white sugar in the topping because I figured we already had brown sugar in the fruit. I actually like the granola that we're dumping on top of this pan, so I wanted to let it taste like itself instead of like brown sugar. 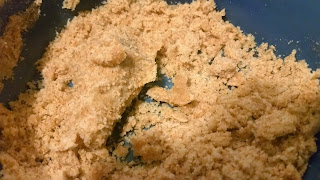 As aforementioned, the fact that it was so dry you needed a whole glass of water just after checking for taste didn't bother me, because it was going on top of all this drippy sugary mess of fruit. 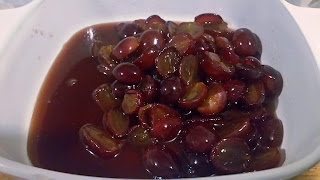 When you spread the grapes out in the pan, it looked like the contents of a can of prefabricated fruit pie filling. It still tasted mostly like brown sugar and spices, not like brown sugar and spices and grapes. I was slightly disappointed, and planning to purchase more flavorful fruits in the future. That way I get more thrilling results when they approach their expiration and must be incorporated into recipes lest my grocery money literally moulder away.

The top of this looked a lot drier than anything else I've ever put on a fruit crisp. I started to have my doubts that the bubbling juice would keep it from turning into a tooth-breaking top layer. But (and this is my cooking classes kicking in) I figured that there'd a lot of steam coming up from the bubbling juice regardless of whether the granola crumbs actually sank in. Either that, or the top would dry out and burn, which would mean my attempt to make a lovely creation out of unwanted kitchen things was merely be a time-wasting detour on their way from the shelf to the trash.
Fortunately, when we removed it, we didn't have a desiccated pan of failure. We didn't have a pan of crisp either- the granola sand had softened and melded into a single cohesive layer of almost-bread-ish stuff. 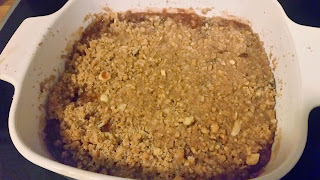 We decided to pretend this was a casserole and bake until bubbly. Actually, we baked it a lot longer, hoping that the juices in the pan would reduce and be a lot less runny.  When the various fruit geysers at the corners seemed to be sputtering up syrup instead of water, we figured it must be done. 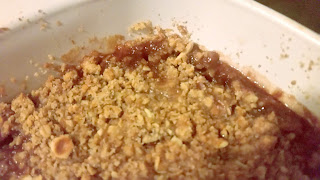 But when you're making fruit crisp, you never know what you're getting until you dig through the top and scoop out what lies beneath. 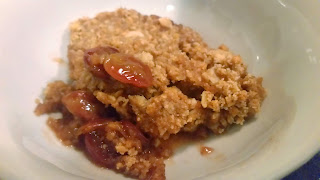 Looks pretty good, doesn't it? Though it seems that even the extremely long baking time didn't prevent this from having a lot of watery stuff all over the pan. I was hoping it'd at least turn syrupy- especially since I definitely added enough sugar that it could have. 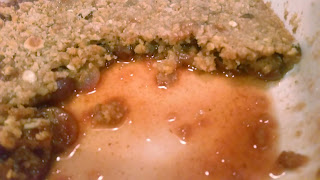 Perhaps because I never bake grapes, I couldn't get used to seeing them reduced to tiny discs of fruit. But as you can see, our sandy granola has somehow turned into a surprisingly cohesive top crust. I was expecting a lot of crumbly bits that would fall all over the place, and instead got... this. 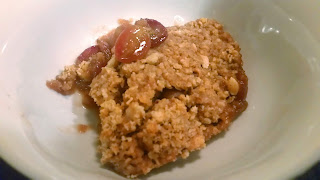 It didn't taste like grapes at all. Oddly enough, the grapes, once baked, just tasted like a generic idea of fruit. If you were to just imagine the taste of "fruit" without getting any more specific, you probably can get pretty close to what we had made.
The taste was a lot fainter than I would have liked, though this did not surprise me since the grape flavor had been barely detectable the whole time. I will probably add grapes to my next cobbler or crisp if I want to add a more fruity flavor, but I wouldn't make another one with grapes by themselves. With that said, soaking them overnight in sugar to draw out the juices worked really well, and I would totally do that again.