Today, we at A Book of Cookrye would like to salute the noble act of getting groceries! This makes it possible for us to make so many delightful and delovely creations. But what happens if no one's made the trip to the grocery store? Or at least, didn't actually think much about what to obtain?
We have accompanied friends on an excursion to the mountains in Tennessee. Rather than cram five people into one motel room as was done in my childhood, they rented what the promotional literature unironically called a cabin. We at A Book of Cookrye will assert that it's not a cabin if it has a 2-story living room and an open kitchen that looks like this. 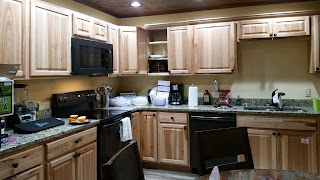 No amount of wood in the ceiling and other slapped-on rustic detailing will make this anything other than a McMansion in the woods. But enough of that- it turns out people were hungry in the dead of night. Many groceries had been obtained for a dinner the next night, but no one had thought much about what we might eat before then. We didn't even have bread to make sandwiches.
And so, we at A Book of Cookrye took this as a challenge. Being in possession of a nearly-finished cooking school degree, we couldn't permit ourselves failure just because we had barely any actual food. First of all, it would mean we've totally abandoned our beginnings as someone who baked Elizabethan chickens in saucepans and baked pies in casserole lids.
Working in our favor, the kitchen had all the basic implements, and a few oddly-specific kitchen gadgets that we assume previous visitors used once and left there. Anyway, between the various drinks in the refrigerator we found jelly and oranges. A pancake mix turned up in the cabinet.The way forward grew clearer, especially after we found an abandoned portion scoop in the drawer. 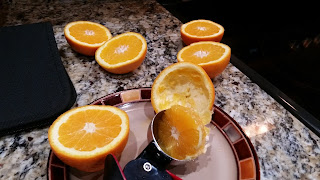 I guess some previous tourists had decided they really needed to properly portion out cookie dough the professional way. I will admit that after a day running myself ragged chasing a good time, I might decide cookies were better than getting my money's worth of museum visits. Though I wouldn't go out of my way to buy expensive dough scoopers I'd only use once. Then again, I'm not the one paying to rent a 6-bedroom "cabin" for a weekend.

Some of the oranges scooped out so neatly, others got reduced to a sad pulp after a lot of spoon-gouging. 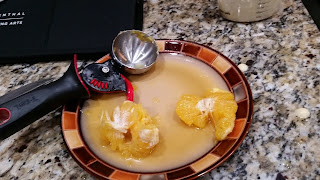 We at A Book of Cookrye don't tend to like the just-add-water mixes, but they do have a way of being there when all other ingredients forsake you. To add some extra flavor, we added the juice that had dribbled out of the oranges. 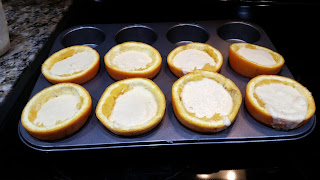 You may wonder why we're making these in orange peels.  We first only found a flat baking sheet, and the orange peels were the only way to contain the batter long enough to bake it.Then they kept tipping over. We started excavating the cabinets hoping for a cupcake pan, and one miraculously appeared. 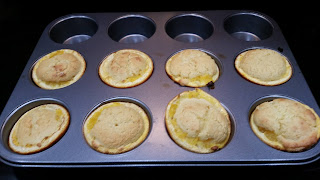 They may be simple and unimpressive, but no one was hungry afterward. 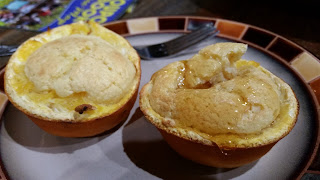 I'd imagined that the orange peels might imbue them with a subtle flavor, and in that respect I was mistaken. In the ones where the orange came neatly out, there was no flavor difference. However, the ones where there was still membranes and other remnants were really bitter where batter met rind. For those of you who think these look really cute and perfect for a Christmas table, be sure to get the rind nicely cleaned out on the inside. 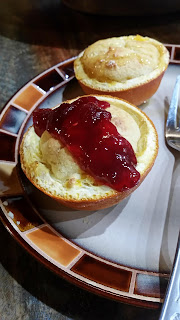 If you're already making a fruit salad or something else that involves a lot of wasted orange peels, consider making the muffin or cupcake recipe of your choice and baking it in them! It's really cute. Also of note, the orange rind took the shape of the pan while they baked. 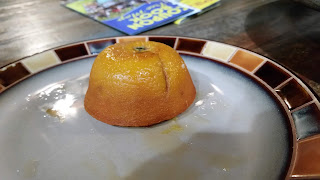 I'm contemplating the possibilities of a straight-sided upside down orange peel as a presentational gimmick. Though in full disclosure, we should note that we did not entirely succeed in our attempts to avoid washing pans. The oranges exuded some sort of oil as they baked. 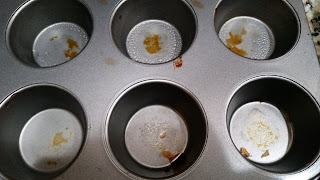 Fortunately, as those of you who carefully scrutinized the kitchen photo will already know, we were provided with a dishwasher. Had there not been one, we very likely wouldn't have volunteered to do any cooking at all. Need we mention again how much a working dishwasher will change your life at home?
Posted by S. S. at 8:01 AM