Gingerbread: or, Of course we did this on Christmas

If you're reading this, it's Christmas day-- assuming you read it the day we posted it, or just happened to read it on December 25th in a later year. We at A Book of Cookrye are honestly burnt out on Christmas, and took the entire holiday break to go out visiting and avoid the high-stakes family memories. This anticlimactic Christmas has been the best we ever had. Anyway, we just happened to be in the company of friends in Ohio, where we did this.

It just figures that we flee from Christmas and end up making gingerbread.

We've never made gingerbread before, so using a recipe so antique we don't get a time or temperature seems like a swell idea. We've never really craved gingerbread, but this year we assembled one of those gingerbread house kits and staring at it made us want some to eat. 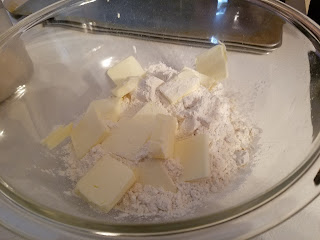 All right, let's step back and look at the recipe. You may notice we are really cutting back on quantity. The original recipe uses two and a half pounds of flour (that's a smidge over one kilo for all our metric friends). That's 10 cups of the stuff, which would make a lot more gingerbread than we even want to think about getting in and out of the oven. Yes, gingerbread is known to keep for a long time, so baking a lot of it at once would make sense in a time when baking day began with lighting a wood fire in the oven. But now we're cooking with gas, and also there's also a table covered with cookies already.
Also of note: this recipe has no sugar at all. The only sweetener is molasses. We at A Book of Cookrye were fine with this, but then again we pour molasses on our waffles. It appears this will be one of the many recipes that we've had to apologize for and say "Well, they didn't like things as sweet back then." There's a reason most of us looking for old-style recipes tend to find modern ones called "Old-Fashioned Nutmeg Cake" rather than finding a nutmeg cake recipe from the 1700's, and that reason is extra sugar.

We normally only use fresh ginger because the powdered stuff seems to have no flavor, but this dried sliced ginger turned up in our friend's spice rack. The smell of it fiercely assaulted the nose, so we figured it would actually taste like ginger and not like nothing. Unfortunately, we had to chop these into powder. This made a short recipe become tedious. Maybe we should have gotten out a blender and put them in with the milk. 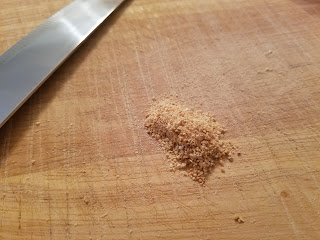 The trouble with making a recipe this old is that you can never tell if it's coming out weird because it's what people liked back then or if you have erred. But as long as we're chopping things up, let's add these granules! 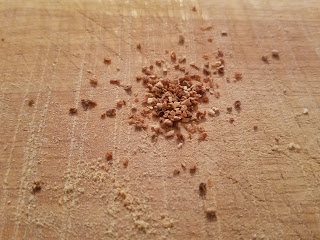 Those are dried orange peels. We thought orange would make a good flavor counterpoint to everything else in the recipe. Another cookbook by the Miss Leslie has a recipe for Molasses Pie, which is literally just a pie crust filled with molasses and baked. She recommends slicing oranges and laying them across the bottom of the pie before you add all the molasses. Therefore, in the spirit of Miss Leslie, we're adding these orange granules from the spice rack. 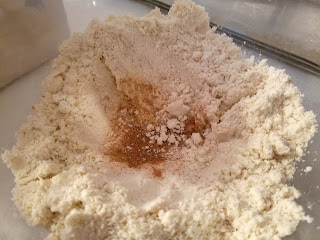 As you can see, we've got a lot of spice in here. So hopefully this will be delightfully-seasoned gingerbread. You're looking at a big heap of ginger, a smattering of orange, and several shakes of pumpkin pie spice. Also, you know you're in the house of people who cook when the wooden spoons look like this. 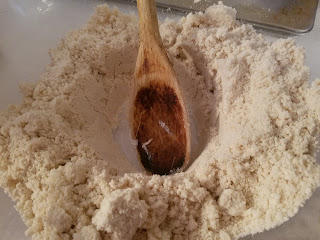 Things were going relatively well at first. We added the milk and, like our patron saint Fanny Cradock, thought of someone we don't like but we're too well-bred to say so, and instead took it out on the bowl of ingredients. However, this merciless approach to Christmas failed when we added the molasses. No amount of beating would mix the molasses into the rubbery mess of dough. This molasses-striped mess was the best we could manage after nearly breaking the spoon while thinking of someone we don't like and taking it out on the floury failure in the making.

And so, we ended up copying Fanny Cradock in another way. We pretended we were Fanny Cradock making a Christmas cake and just used our fists. The dough was soon ready for the next splat of milk. 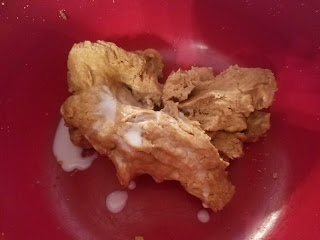 See, when the dough is this rubbery, you have to add the liquids in just a little bit at a time. Otherwise, you end up with little hard dough curds that refuse to actually mix with the milk they're floating in. We had considered mixing the milk and molasses together. But Miss Leslie clearly states to add the two alternately, and we were going to follow her instructions. That way we could blame her if this failed. Eventually, we ended up with some oddly rubbery and springy dough that looked like this. 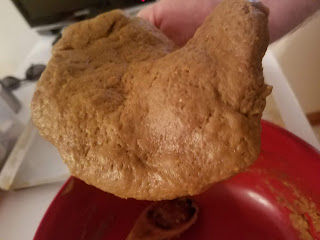 We actually weren't too terribly unnerved, even though we could have repurposed this dough as a rubber band. It very much resembled the dough we got when we made gingersnaps, and those came out all right. But we tasted it, and all we could detect was the molasses. And so, back to the spice-chopping!

We got the extra spice mixed in, and tasted no difference. Our only hope was that the steam in these cookies would draw out the flavor, but since this was a very dry dough that seemed unlikely. And so, we figured the dough was as good as we could get it and got to cutting! And so, because we were visiting people who still had their Mom and Grandma's things in the house, the Box of Dreams was brought forth. 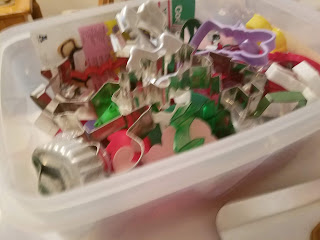 I was informed this one is meant to be Santa, but to me it looks like a check engine light. 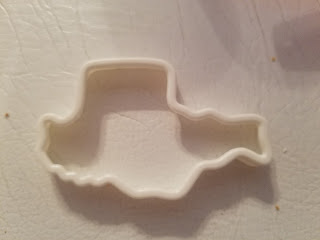 We had a relatively small batch of dough, and everyone had picked out some cutters they really wanted. The little mini ginger-dude was popular. As for myself, I wanted lots of stars and moons. We also found a very antique playing card set- hearts, spades, clubs, and diamonds.

As you can see, the dough was oddly leathery. It tasted like molasses and flour. 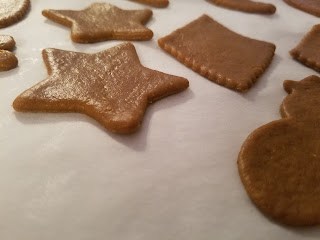 This doughnut cutter was also very popular because we could simultaneously cut cookie rings and gingerbread bonbons. 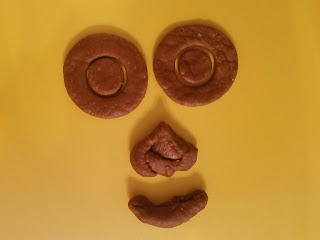 As we reached the end of the dough, we decided to take the last tiny bits and actually make little twists as the original recipe suggests. 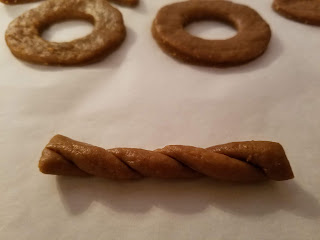 They took a lot longer than we expected to bake, especially given how thin we made them. We were paranoid that we'd burn them because they're mostly made molasses. For the uninitiated, if you overbake most desserts, they just come out a little bit extra brown and toasted-looking. If you overbake something with a lot of molasses, it just burns. 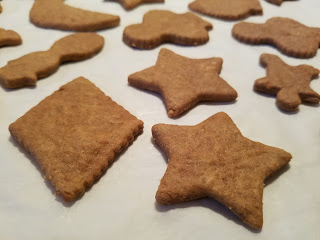 I know this shape is supposed to be a snowman, but with brown cookies I think it looks like Mr. Hankey the Christmas Poo. 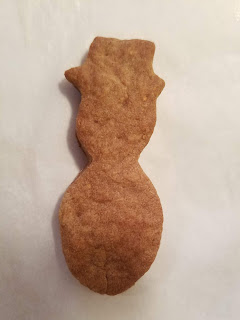 These baked into some very nice, surprisingly-mild molasses cookies. They were crunchy like biscotti despite only baking them once. I think the baking soda reacted with the molasses and mellowed its taste. Unfortunately, we may as well have skipped the spices entirely because they were imperceptible. We considered that next time, we could boil the milk and add the spices to it, steeping it like an herbal tea before adding it to the dough. But they were nice and light in the middle, and very good for dunking in tea. 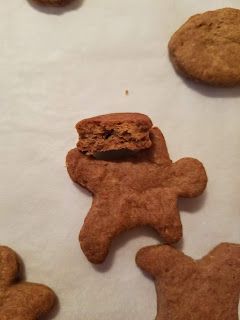 However, if you're going to make little gingerbread twists, we recommend you twist them tightly. Otherwise they can come apart.

Lack of spiciness aside, we think we at least got the dough to come out as intended. It was crispy enough to eat, but sturdy enough that one could make little houses out of it. One could do all the traditional gingerbread things with these cookies as they came out: build houses, make tree ornaments, eat them and actually like it, and break them with friends.
However, next time we make these we will probably boil the milk and drop all the spices in it to infuse. In theory, making a high-concentration herbal tea will actually add the spice flavor to the bread.

We're going to cut in with a night-after-Christmas postscript and add that it was a LOT better the second day. The texture was a lot better, and the spice flavor actually came out and soffused the bread. So if you make it, make it a few days ahead and leave it out to ripen.
Posted by S. S. at 6:42 AM