Remember how we once brought a big batch of cakes to friends as a way to test whether changing the way you mix the ingredients alters the cake? These same friends are about to get a cake with a lot more alcohol than one teaspoon of vanilla extract. Today, we at A Book of Cookrye are making a cake with... this! 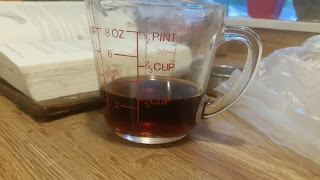 The above photograph, dearest of dear friends, shows about a third of a cup of Jagermeister. Inspired by a friend who replaced with the water with vodka when making cake mix (the cupcakes came out surprisingly normal if a bit dry), we are randomly substituting alcohol into cake recipes.

Always follow the spatters in a cookbook to find the really good recipes. Apparently this recipe belongs to a Maine sail-making family, so it's a decent choice for gratuitously spiking. Those who live with the sea have long been known to enjoy the occasional tipple.
With that said, Maida Heatter attributes a lot of recipes in this book to various families that have handed them down for a long time. I think getting a family recipe published is a lot better than refusing to share it. Some may see it as giving the secret away. But we know a lot of people whose various elder relatives refused to ever share their best or signature recipes, and those recipes were buried under their hats. We at A Book of Cookrye always recommend writing recipes down (or showing others how to make them) rather than carrying them permanently underground.

We have previously mentioned that we cook more alcohol than we drink nowadays. As a result, we've had a bottle of Jagermeister lurking untouched for quite some time among our possessions. A friend who did a lot of bartending gave away his many bottles when he moved across the state... five years ago. Did it expire in storage?
I always thought Jager was more of a maroon-ish color, not the same shade of brown as artificially-flavored pancake syrup. Was it originally maroon, but the artificial dye broke down while half of a decade passed in a desk drawer? (Before you judge me for keeping alcohol in a desk, I have no important papers to put there and don't like devoting kitchen space to things I never use.)
In making this cake, we'd thought Jagermeister would be a nice substitution because chocolate and anise go together really well. A lot of people have discovered chocolate and cinnamon, but far fewer have ever experienced chocolate and anise (likely because more people have a shaker of cinnamon in the cabinet). 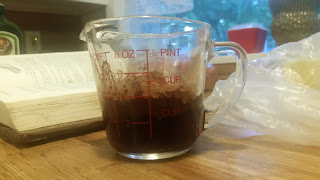 And so, like nearly every cake made in Our Kitchen of Cookrye, we start with a lot of butter. 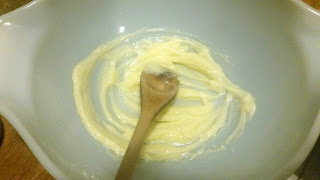 For those of you following along at home, you should be sure to use a different cup to measure out the cocoa and sugar. Or at least wipe the cocoa dust off before reusing it. You'd think getting a pastry certificate would have led me away from mistakes like this, but here is photographic proof that I will never learn. 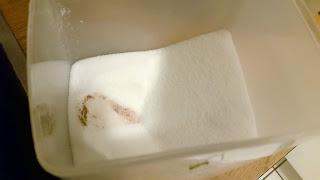 Is it weird that this early stage is one of my favorite parts of cake making? After taking so many classes where we had to have flawless presentation, exquisite arrangements, and perfect eye-appeal, it's nice to know that every cake starts out as slushy splats of ingredients. 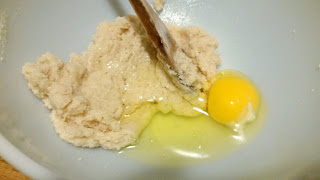 At this point, we could still change our alcohol-experimenting minds and actually follow the recipe. The heavy overlap between our strange substitutions and disappointments recommends such an we stop following our hearts and just do what the recipe says. I'd say it's unwise to mix food with alcohol, but people might think I meant that you shouldn't cook while drunk, not that randomly spiking otherwise normal recipes is ill-advised. I have done every single daft cooking experiment you see here while completely sober and (theoretically) in control of my own mind. And so, we proceeded with the spiking of the cake. 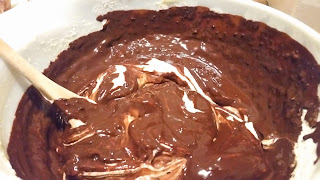 I usually have misgivings about adding water instead of milk to cakes, as we would have done here had we not dumped in liquor instead. I've done it before in an extreme pinch, and the cake always tasted like something was missing. Like, one couldn't pin down an exact flavor difference, but it was also not quite right. However, this recipe uses water and sour cream. I've used water and sour cream as a substitute for buttermilk in a lot of recipes, and I've received no complaints (including from myself). 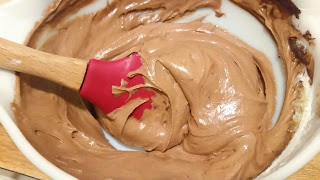 The finished cake batter looked a lot like chocolate mousse. I keep meaning to make cake batter and pour it into an ice cream maker, and this looks like a great recipe to do it with. It was also oddly airy. Usually, when a cake batter is this light, we had to beat egg whites until they looked like shaving cream and then carefully fold them in without deflating the bubbles. Also, you could barely taste the alcohol in it. If the alcohol taste was nearly imperceptible before baking, in theory the oven time would remove the residual alcoholic sting. As I hoped, the Jager had added a nice anise flavor that I really hoped wouldn't bake out. 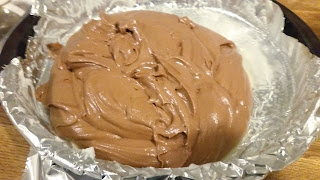 I didn't know if the alcohol would actually change the cake, but was very intrigued to find out.
Every now and then we see the vodka pie crust make the cooking meme rounds on social media. According to Pinterest rumors, gluten forms better in water than alcohol*. Therefore, using vodka instead of water will make for a more tender pie crust because there will be far less gluten in the dough to toughen it. The the alcohol will then bake away, leaving everyone none the tipsier. Perhaps using liquor instead of water would do the same thing here?

Well, the alcohol definitely altered the texture. No one called this a cake, but instead kept calling it "the cake-brownie thing." It was a lot more tender than cake, almost-but-not-quite fudgy. Also, the anise from the Jagermeister went very well with the chocolate. Even if you don't keep liquor on hand (though you can always get one of those mini-bottles if you're just using it for one recipe), consider adding a bit of anise to your next chocolate recipe! 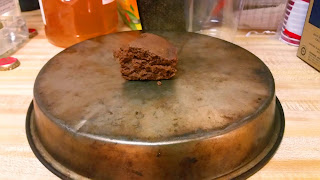 *Today's baking science lesson in two sentences: Flour does not contain gluten. It contains two proteins that, when mixed together with water, combine into gluten. ↩
Posted by S. S. at 2:16 AM