Herbed Potatoes and Carrots: or, Making dinner without using any dishes at all

How many of us ever pause to appreciate the pipes in our house until they break? We have suffered a minor plumbing failure which expanded. The plumbers crawled under the house thinking they would fix a minor leak. They re-emerged through the floor hatch and said that actually, the pipes to the other part of the house need to be replaced too. They later emerged from working on the other pipes to say they'd found some other spots, and.... well ultimately it turned out that all the plumbing in the house was held together only by rust and dumb luck, and had to be taken out immediately because it should have burst in the walls a few years ago. Among other things, this meant that we had no running water in the kitchen. But running water or no, we all still have to eat, right?
With that said, we at A Book of Cookrye have been adapting to dishless cookery.


Dishless cooking as practiced here at A Book of Cookrye seems to involve a lot of potatoes. We have microwaved them, baked them, and attempted all manner of things to make it seem like we have variety in our lives.
Today we attempted to be fancy and toss them in spice-infused oil. Now, it's true that the oil tastes better if you steep the spices for a day or two. But if you didn't remember to put the spices in the oil early enough to allow time to infuse, you can put it in the microwave until piping hot and get the same marvelously flavored result.
This quick-infusion (which works just as well as- if not better than- leaving the oil and spices to sit for a day or two) typically involves a microwave-safe cup which then has to be washed. If you think we get twitchy about washing dishes without a dishwasher, you should see us when the only running water is a garden hose that the neighbor mercifully threw over the fence. I have actually snatched ceramic plates out of people's hands and pointed to the stack of paper ones on the counter. Anyway, going of the idea that you can microwave paper plates, we thought we could microwave-infuse the oil in this paper cup with the adorable little squirrel on it. 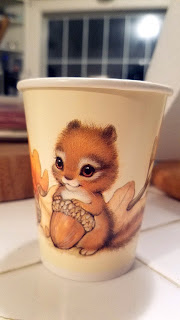 We tend to like a lot of lovely spices on our spuds when we cook them this way. Believe it or not, there's a decent allotment of cooking oil under there. 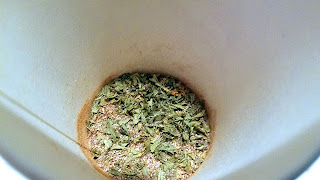 We gave it a quick stir with the index finger and put it in the microwave. As you can see, we added so much paprika that we dyed the oil a very dark color. A lot of recipes seem to use a parsimonious amount of paprika just for the color, but we think it's delicious. There's only 2 or 3 spoons of oil in there, so we figured that 15 seconds would probably be plenty of time for things to get nice and hot. 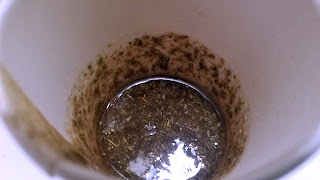 It turns out it's quite the mercy that we microwaved the oil for such a short time because we opened the microwave and a massive smoke cloud attacked us right in the eyes. We're only showing this so that you can learn from our mistakes and never try to microwave paper cups. You will end up frantically rushing out the door so it can smolder outside instead of smoking up the kitchen.

Fortunately, while we had burned off the oil and a lot of spices, we had at least avoided wasting the actual main ingredients of dinner. But first, we merely needed to temporarily pause our food production and frantically open windows and bring out box fans because we had just reenacted this card we sent to our brother when he called and bemoaned having to march outside due to burning popcorn:
Fortunately, the principal ingredients of our dinner still looked like this: happy, colorful, and (most crucially) not burnt. 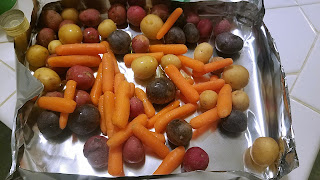 So, dropping our misguided microwave notions, we just dumped everything on the spuds and carrots, tossed them around a bit with our hands to coat, and inserted it in the oven. Hopefully the magical smell of spuds and herbs would cover up the odor of burnt failures. 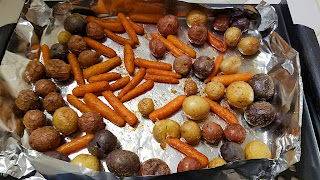 We were hoping for these to be nicely browned and enticing. But instead we only got shrinkage. We figured they were ready when you could stick them with a plastic fork without snapping anything. 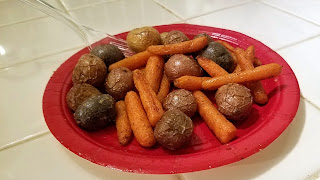 Now, as this water outage is ongoing, we've been making quite a few batches of carrots and spuds. It's very convenient, and if we copy that lovely recipe from Canada and crack an egg on top, it's a complete(ish) dinner. 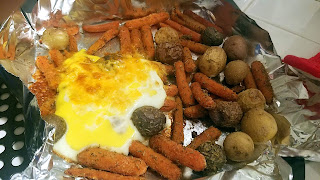 Now, no dinner is complete without dessert, especially when you're stressed because there's smelly rags piling up in the washing machine and crusty plates festering in the sink while you yearningly stare at the shower and fondly wait for it to bless you with scalding water again. But do we have a brownie recipe that doesn't involve dirtying a lot of cooking utensils? 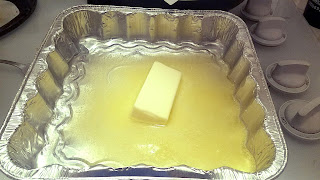 Blessed be our former teacher for sending us this recipe! We had previously thought mixing it in the pan was silly and that it'd be so much easier to really give the batter a good hard stirring if we had it in a bowl. But today, this brownie recipe makes perfect sense. We snapped two plastic spoons before it was mixed, but we got perfect brownies. 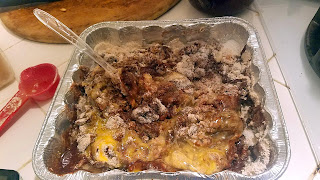 And to make things even better, the only dirty dish we had was this one measuring cup, which we we merely wiped with a paper towel and put away. 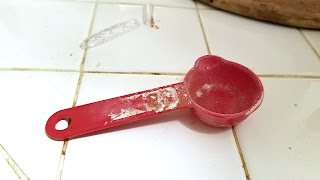 Dinner is made, dessert is served, let us now rest and hope we're using the real plates next week! 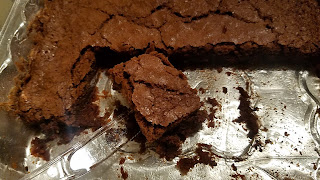