We at A Book of Cookrye have been forced to alter our grocery habits. Because we live within walking distance of a grocery store (even if it's so hot that we must drive there so we can be air-conditioned for the entire six-block journey), we tend to just pop in for groceries every other night or so when we realize we don't quite have all the things needed for that night's culinary plans. Obviously, with a plague on, that is no longer well-advised. We are discovering that we are in fact very bad at the sort of domesticity where you plan your meals for two weeks and get groceries for them all in one expensive expedition. And so, among other things, we had a lot of bananas nearing the end of their edible lives. 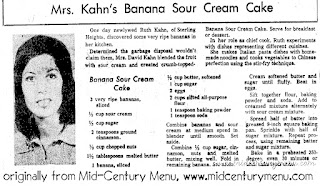 This recipe comes to us from Mid-Century Menu, and ultimately from someone who had precisely the same problem we do now! I love how they even say she was "determined that the garbage disposal wouldn't claim them." I totally support this attitude, Ruth Kahn. Now, on Mid-Century Menu, she noted that the cake needed just a little bit of salt to bring out the flavor. She also noted that she's made this recipe multiple times.


Let's look at this line from the note above the recipe:

Our Pieathlon friend Poppy Crocker has often noted that here in America, there is a blurry or even nonexistent divide between salads and desserts. Often the same recipe will say to serve on a lettuce leaf for salad or without for dessert. Or perhaps it will say "reduce sugar from 2 cups to 1½ to serve as a salad." Here in America there is a similar, if not even more obvious, merging of breakfast and dessert. We never considered this until some of our friends from other countries reported their surprise at seeing cakes and cookies renamed buns and scones and then served for breakfast. And that's before we get into muffins (which these days are cake- we've even had iced muffins for a long time now) and everyone's favorite cinnamon rolls which drip and ooze with cream cheese icing.
And so, let us start this off the way we have started so many things of late: with butter! 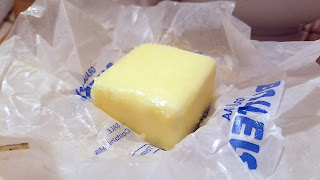 I have to give Ruth Kahn credit: she does not skimp on spices. That is a massive pile of cinnamon in this bowl, and we did not err on the side of generous when measuring it. 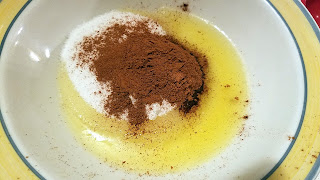 It looks a bit unnervingly greasy due to the fact that we melted the butter (which I guess will make it easier to sprinkle and scatter over the cake batter later on), but there is so much cinnamon it looks like brown sugar with extra molasses. It was almost (but not quite) hot from the extreme concentration of that brown powder, which meant it would still be wonderfully spicy when dispersed throughout the cake. 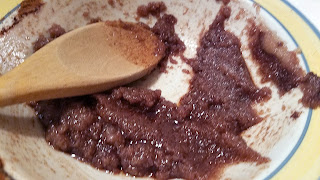 And now we get to the first of the bananas! I practically never slice bananas for anything, so this step felt oddly like preparing food for small children. 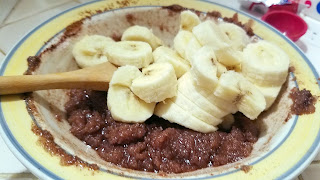 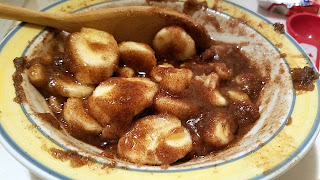 Now, Mrs. Kahn devised this recipe to turn wasted fruit into delicious cake, and we are going to follow in her spirit.
We have previously mentioned that if you keep your fruit in the main part of your refrigerator rather than the fruit drawer, it will dry out rather than go moldy. And here is the proof: these strawberries have not even the slightest coat of fuzz on them! There were a few more in the container when we found it, but we ate them. We intended to eat only one to make sure they tasted good, but  they were so nice we wanted a few more. You may think they would acquire the taste of an old refrigerator, but instead they tasted just like those expensive dried strawberries you see with artistic labeling on them. 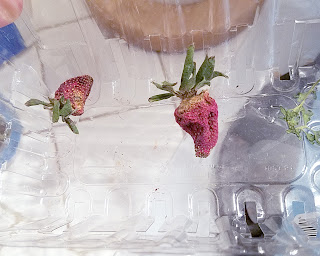 We decided to cut the strawberries up very small so we could be sure they would soften up while baking.
We also had these blueberries that were just starting to desiccate. They didn't yet look like raisins, but they had gone from delightfully firm and juicy to a bit mushy on the inside. 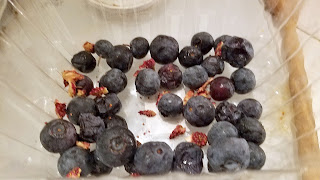 And here's all the lovely fruit, marinating in sugar and enough cinnamon to make the whole kitchen smell like spice cake before we even turned on the oven. We figured that once it was baked, it would be impossible to tell that the fruit was ever so subprime.

I think a lot of people now forget that baked fruit recipes were a very common way to make sure you use up the squishier things you never got around to eating. Instead, we purchase the most perfect-looking, exquisitely-ripe  peaches and apples so we can bake them into pies. 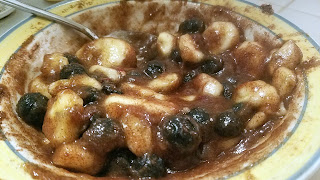 If you thought we had dealt with all the bananas in the recipe, you are mistaken. You know how we said we had a lot of bananas? Well, we not only had a lot of them sitting on the counter getting browner every day, but we also had even more in the freezer that we quickly stashed away recently before they finally got to rotten to repurpose. As they thawed, they exuded this weird transparent syrupy substance. 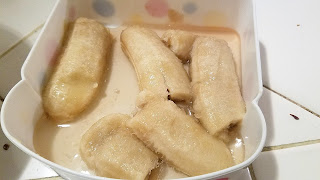 As you can see, it's sort of pink and about the same consistency as pancake syrup. We first didn't know whether to drain it away or keep it. But we figured that it was in the bananas when we froze them and would never have separated out had the bananas not entered the freezer. Therefore, whatever this banana syrup is would have gone into our cake had we just plucked the bananas off the counter rather than storing them in what used to be the icemaker tray before the icemaker broke. And so, it went into the blender along with the shrunken remains of the bananas from whence it came. 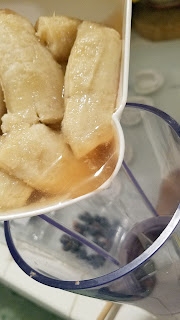 Unsealing the sour cream gave us pause. There was enough pressure to turn the seal into a hard dome. We were afraid it would pop open like a can of biscuits. 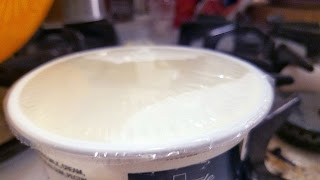 We didn't think this was a lot of banana, but it fills up the (admittedly small) blender. I've seen a lot of people say they like the taste of banana bread but not the lumpiness. If this includes you, then Mrs. Ruth Kahn is your banana bread kindred spirit. By the time the blender is done with these, the banana bread will be as light and lump-free as when we did the same thing with plantains. 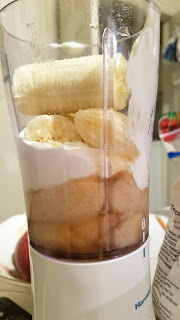 Looks like a milkshake, doesn't it? That stubborn white smear of sour cream that refused to blenderize with everything else just makes it look like one of the things you get from a coffee shop that involves a blender, ice, and a squirt of whipped cream on top. 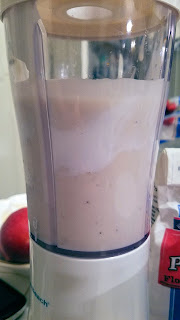 Actually, the banana-sour cream blenderization tasted better than we thought. It was slightly sweet and just a little tangy, very much like when one blenderizes fruit and unsweetened yogurt. We could have put some ice cubes in there and very much liked it.
And so, having done the advanced prepwork, we can finally get to the mixing of cake!

We've been gradually breaking every wood spoon in this kitchen. No matter how many times we are assured that the spoons were like 20 years old and ready to depart this earth, we still feel bad every time we have to look over to our friends and hold up a severed piece of spoon in each hand. There was a cute vase of them next to the stove where they were arranged like flowers. Now only one or two survivors remain, and I fear they may be short-lived. 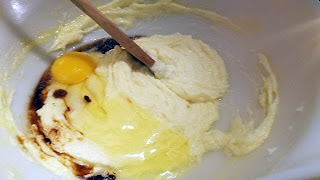 We were a bit unnerved at how grayish the bananas had become while in the blender, and had to taste them to make sure they still tasted like bananas.  Perhaps the acidity of the sour cream caused a reaction with them that changed the color. Or maybe they're just very whipped up. 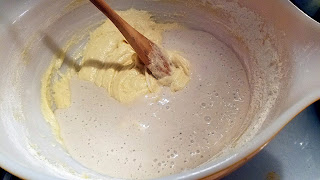 If we ignore the banana-sugar-cinnamon stuff  we did, this is a pretty basic recipe for banana bread. With that said, it's a very good one. Or at least, the batter was really good. 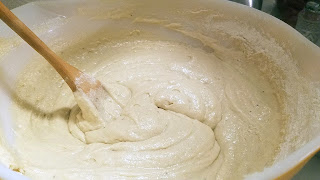 I don't know what it is, but when cake batter looks like a swirl of ice cream when it goes in the pan, the cake is almost always better than when your cake batter is thin and runny. Also, this tasted fantastic- the sour cream didn't add as loud a flavor difference as I expected, but the batter tasted just a smidge richer for having it. 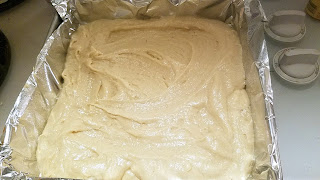 And here we get to the real banana-saving part of this recipe: having added as many blenderized bananas as we can before the cake won't bake right, we just drop the rest of them into the cake. We're of course also adding the blueberries which we wanted to save from the trash as much as the bananas. 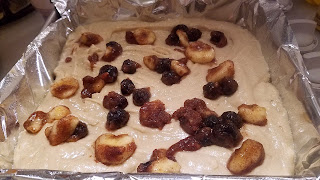 I'm guessing Mrs. Ruth Kahn does this two-layered sprinkling of fruit because it sinks a bit while baking. Had we just stirred it in, it would probably all go to the bottom of the pan. And then the extra layer on top of this is in case the stuff in the middle does completely sink- that way, there will be at least some delicous things dispersed throughout the cake instead of sticking to the bottom of the pan. 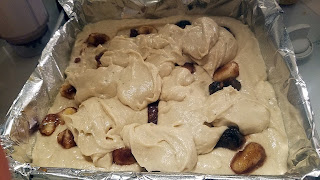 We had a hard time spreading the second layer of batter on top. But we figured if we got it sort of close to even, everything would level out while baking. Seeing all these splats of stuff really does make this look less like baking and more like an elementary-school art project, doesn't it? 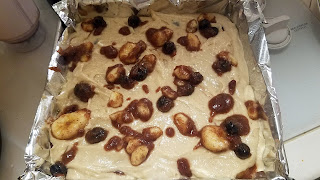 And here it is, ready to eat! I'm not sure that I like those baked banana slices on top. They don't look very... nice. Instead they just look shrivelled and squished. But we plucked one off the top and they tasted so nice that I didn't care anymore. (Is it a surprise that the banana slices were good after marinating in sugar and baking in cake batter?) 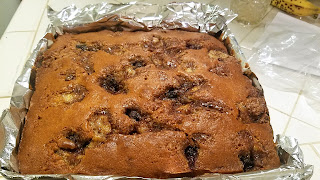 This cake turned out a lot lighter than we usually get with banana bread. I think it's blenderizing the bananas that does it- we had the same fluffiness when we blenderized the plantains and made bread out of them. The banana slices turned marvelously creamy while baking. The sour cream became imperceptible while it baked, but we're going to guess that the baking soda fizzed with it and made the cake rise even higher.
If you are staring at a lot of bananas and realizing you'll never eat them fast enough (or if the dark and spotty ones are extremely discounted at the grocery store), try this and you'll be glad you did. If we were making any improvements, we might replace about a half cup of the flour with whole-wheat to add a subtle nuttiness to everything. 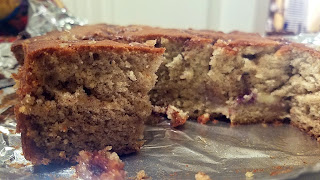