Peanut Butter Drops: or, Peanut butter cookies from before they all looked the same

There's a lot of variation to, say, chocolate chip cookies, and even something like brownies will show up regularly with cheesecake-batter swirls or other fun alterations. But, in addition to everybody's near-identical peanut butter cookies, you also notice a peculiar uniformity in photography style. Food photography used to vary widely-- from dramatic theatrical-looking lighting on a black backdrop, to softly-lit still-lifes with lots of figurines and other strange props surrounding the food being demonstrated, to overdressed and elaborate tablescapes. These days, it seems that everyone's food photos are converging into a very uniform look- they are all shot in very soft daylight on a neutral-colored and blurry background, and often with only an extremely small portion of the food in focus while the rest of the photograph becomes an artistic blur.
This brings us to today's recipe! Our new favorite beat-up cookbook has three recipes for peanut butter cookies: one that looks like all the cookies shown above, a recipe for orange-peanut butter cookies, and then one we will make today. We found it really interesting that none of the recipes looked the same. It is fairly common in these community cookbooks to see a whole page of hamburger casseroles that look nearly the same because no one on the cookbook committee wanted to leave anybody out. Is there a reason that none of the other,  shall we say,  non-standard cookie recipes get handed around anymore?

First of all, we've never seen peanut butter cookies that you just plop onto the pan instead of carefully shaping one dough-ball at a time. Second, aside from a few people who stir in peanuts (or, if you're really daring, chocolate chips!), no one adds anything to peanut butter cookies. Today's recipe has a very polarizing ingredient:

Yes indeed, today we are improving our peanut butter cookies with raisins! I will never get over how passionately people hate raisins in baked goods. With other things, people may say "I don't really like coconut in cakes" or "Eh, poppy seeds are okay on a bagel I guess" or (and I include myself in this one) "I honestly don't like nuts in brownies." But raisins in cookies are like pineapples on pizza. No one merely dislikes them, but they absolutely despise them and will shout about it.
But let's set those aside for a moment and move on to things everyone likes in cookies: butter and sugar! 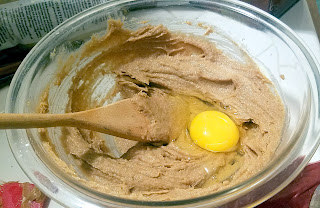 Now, we at A Book of Cookrye are no strangers to halving or quartering recipes. When you like trying the weird and forgotten recipes that time has tried to hide from us, you soon learn to cut them down to as small a quantity as possible because you never know when you'll be blenderizing peanut butter into vegetable soup because Disney told you to.
With the perils of trying strange recipes in mind, meet our new friend in cooking: the one-eighth measuring cup. We never thought we'd use it when we first rummaged through the drawers a few recipes ago. But when you cut recipes down a lot, you will use one of these more than you ever thought you would.

At this point, our cookies looked like cake batter. Of course, drop cookies are always a bit runny (otherwise they wouldn't spread into delicious cookies but would instead bake into hardened dough clods),  but this is the first time we've seen it with peanut butter cookie dough. When we tried it, it was odd to taste peanut butter cookie dough in the form of cake batter. It's like when we were treated to a wedding-cake flavored snow cone: it's like the flavor was transplanted into somewhere it didn't belong. 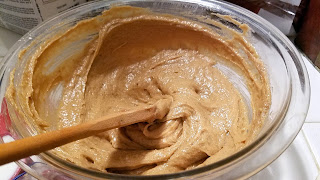 Here we veered off recipe a tiny bit. See that brown flour? That means these cookies are good for you. If we're allowed to say sweet potato fries are so much healthier than French fries, then using brown flour instead of white makes these cookies a nutritional bounty. Or at least, they are as good for you as granola and muffins. (In all seriousness, I stopped bothering with granola after reading the labels. It's basically oatmeal cookies without the flour and eggs. I'd rather have a real dessert.) 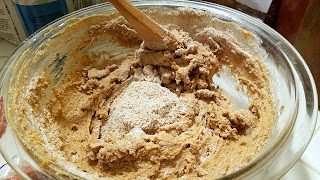 I don't know what I expected, but it looked like slightly runny peanut butter cookie dough. Which I guess is what we're going for...? I've never made any peanut butter cookies besides the ones you roll into little balls and press with a fork to get those cute lines on top. This doesn't look like batter, but it doesn't look like dough either. It looks like one of those recipes where you're supposed to shape it in your hands, but you messed up somewhere and now it's just a little bit too gloppy to do anything with. 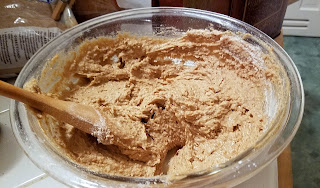 Speaking of things looking messed up, it is now time to bring forth the raisins that have been waiting patiently ever since we snipped them. Chopping raisins is one of the things that really dates this recipe- no one does that anymore.
Before you argue that I should never sully the beautiful cookies with the icky raisins, consider that peanut butter and jelly go together like... well... peanut butter and jelly. And grape jelly graces more sandwiches than any other kind. As we all know, raisins are dried grapes. Now, the two main ingredients of grape jelly are grape juice and sugar (or high-fructose corn syrup). So, we've got a crapton of sugar in the cookie dough , and we have grapes (even if they've gone a bit pruny). Combine this with the wheat flour, and you basically have a peanut butter and jelly sandwich with all the ingredients rearranged (and also some butter that got in there for bonus butteriness). Peanut butter and jelly sandwiches are delicious, so this cannot possibly go wrong. 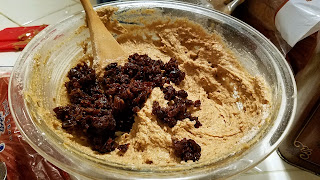 Also, if you're still traumatized from that one time when you were a wee tot and you thought the cookies had delicious chocolate chips until you bit one and found icky slimy raisins (a surprisingly universal experience), maybe you'll feel better after seeing that I cut these so fine you can barely see them once we've stirred things a bit. 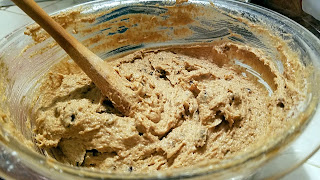 I mean, even if this recipe's a bit weird, at least it looks like it's going according to plan. By which I mean drop cookies typically look like this unless you have one of those cute little cookie scoops. The only thing off about them (unless the raisins irk you) is the peanut butter-like shade of brown. That is not a color I am used to seeing in drop cookies.

Now, the recipe tells us to press them with a fork, which seemed utterly pointless when these were sticky blobs. But we tried anyway so that we could blame Mary Salat of Chicago if anything went wrong, saying "I followed all your directions and this happened!"
You can see a few grooves incised into the little plops of dough, but not the adorable crisp lines we're all accustomed to today. Maybe we're pressing the dough with a fork because everyone knows that Peanut Butter Cookies Have Those Fork Lines Pressed On Them. It's not a snickerdoodle unless you rolled it in cinnamon, and it's not a peanut butter cookie unless you've pressed that adorable grid on top. You might think the dough needed just a little starting push to help it spread out and that it wouldn't stick to a fork the way it would have glued itself to, say, the bottom of a cup. But we really didn't get these any flatter than they were before. 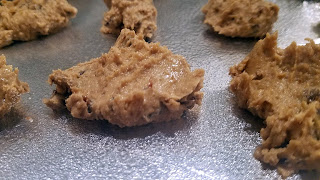 Either our oven runs hot or Mrs. Mary Salat's oven ran cold. We set the timer for ten minutes just like the recipe says, and in eight minutes the delicious smell of baking that suffused the kitchen developed a distinct burnt tinge. We checked in on the oven and found that all of the cookies had that little nearly-black ring of burnt around the edges. 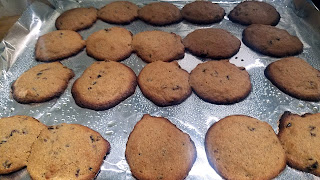 Maybe you don't think it looks too bad in the above photo. Maybe you think "Oh, they're just a bit toasty on the outside!" Well, here's a merciless closeup of how I have still never learned to occasionally peep through the oven window when baking. 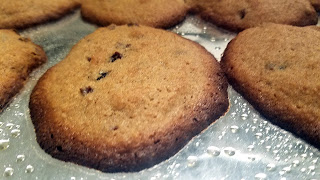 We couldn't waste an entire batch of cookies, so we hastily trimmed off the worst and hoped for the best. While the cookies were still hot, it was as easy as cutting up brownies. But as the cookies cooled, they got a lot more brittle. We feared that even the not-burnt regions had gotten baked until too hard. 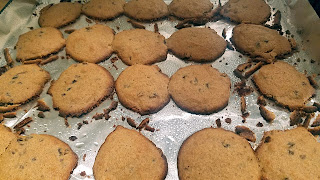 As you can see, these cookies were nearly very cute. If we hadn't burned them, they would have been adorable little brown peanut butter confections that were shaped exactly like muffin tops. Instead they looked like someone who barely knew which end of the knife goes in your hand and which goes in your food tried to cut them up. 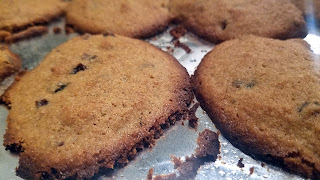 These cookies are interesting. Usually peanut butter cookies are really dense, but these were more light. Chopping the raisins made them kind of disappear and leave the taste behind. You couldn't detect them, but the taste was all over. Imagine if you could buy raisin extract the same way you buy vanilla. People were divided over whether the raisins were any good or not.
Also, these cookies do not go stale. They ripen. After a day or so, they got denser and were very like the peanut butter cookies we're all accustomed to. Except with raisin flavor throughout.I know a lot of you lovely people dislike raisins, but if you leave them out you'll have lovely peanut butter cookies that have just a bit lighter texture than we're used to nowadays. These actually were like a peanut butter version of the depression-era cookies we've made a time or two. My only warning is that since these are just a bit lighter, it's easy to forget how many you've eaten. 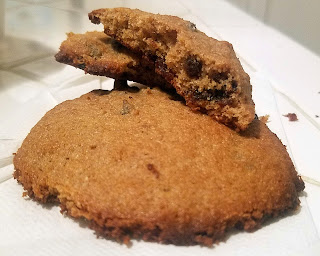