Shortbread when you're running out of butter!

Shortbread is one of those recipes that people get very protective about. Some things like brownies can undergo tremendous change (and I don't just mean stirring in wacky things like gummy bears, but fundamental recipe alterations) without people squawking "It's not a brownie anymore!" Other things like grilled cheese get a devoted fanbase that comes out angrily typing as soon as you add a slice of tomato that you've changed it into something completely different! Shortbread is the same way- stir in a half-handful of chopped prunes into an otherwise unchanged recipe and there will readily be a swarm of angry food snobs insisting that it's not shortbread anymore. We at A Book of Cookrye wonder about those people. Is anyone really enjoying their food if they can so readily throw an angry typographical tantrum over a minor change?
Moving back to cookies, most people will insist that shortbread should start with exactly these two ingredients. 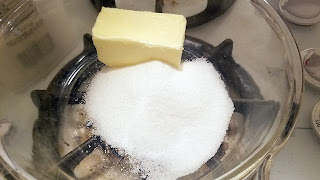 But perhaps one lacks the full recipe's allotment of butter. Here, being too much of a purist to go on means you will not get any cookies. We at A Book of Cookrye could wait for the next grocery expedition and be cookie-deprived in the meantime, or we could just dump in a puddle of oil and hope the partial stick of butter hid our subterfuge. 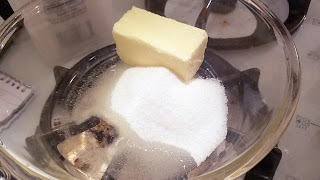 Yes, we've replaced about a quarter of the butter in Mom's cookie recipe with oil because we used part of the butter to make a batch of gravy. We weren't leery about using oil necessarily, but this particular bottle of oil has been in the pantry for a while and we couldn't tell if it was beginning to go rancid or not. But when we tried a bit of it on a tiny spoon, we did not experience that reflexive revulsion that comes from eating rancid food. 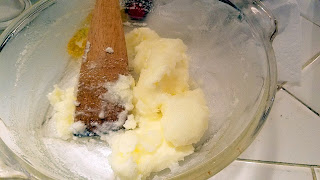 Using oil gave us one unforeseen difficulty: the butter broke up into little lumps that slipped and slid around in the oil and refused to actually mix in. It felt less like combining ingredients and more like chasing them as they dodged the spoon. 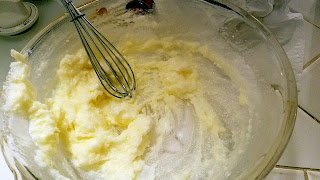 We easily fixed this by switching to a whisk and heeding the advice of Our Patron Saint of Cookrye, Fanny Cradock. We thought of someone we've never really liked but we're too well-bred to say so, and then beat everything in the bowl until it was not just well-mixed but astonishingly whipped up. Like, the butter's barely even yellow anymore, it's more of an off-white. We couldn't tell if the oil added an unnerving undertaste or if we were imagining it after worrying that we'd ruined everything by an ill-fated substitution. 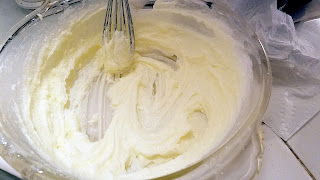 We were more than a little curious how these would come out post-cooking. Would they remain a bit melty since butter re-solidifies at room temperature and oil does not? Would they taste normal? Reassuringly, the cookie dough looked just like the dough for this recipe is supposed to: like beige Play-Doh. 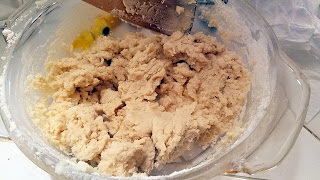 We didn't have the patience to clean the counter after rolling this out and cutting it into various adorable shapes. So we're going with the easier way that doesn't involve digging out a rolling pin and finding a big enough acreage of counterspace. 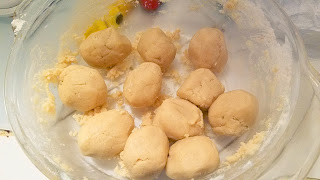 We weren't sure how much these would spread, and therefore did not know how much to flatten them. If we pressed them flat, would they spread like chocolate chip cookies do, leaving us with thin little patties? If we left them in balls to allow for lots of spreading, would they firmly hold their original shape and emerge from the oven as awkward-to-bite-into cookie balls? Unsure of the better option, we kinda flattened them a little bit and sent them ovenward. 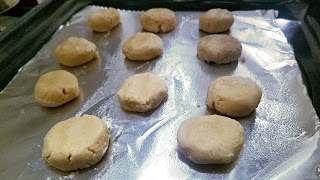 It turns out that no, they don't really spread at all. You could roll them out, cut them with cute shapes, and you wouldn't have to worry about the dough melting into blobs while it baked. They did get really puffy though. 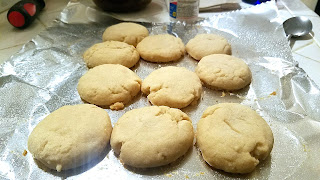 This was a surprisingly good success! We had feared the cookies would be greasy or otherwise sad to eat, but they were surprisingly light and delicate. They were almost indistinguishible from oil-free cookies, except they were just a tiny wee bit softer and airier when you bit into them. In conclusion, if you would like to make a treat for yourself but it's a bit tricky coming up with everything (or if you do have all the things but want to make things last longer), you can swap oil for about a fourth of the butter in a cookie recipe and things will be fine. And then you will have cookies! 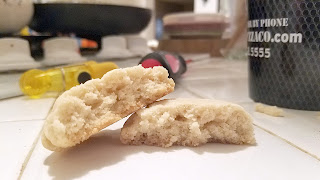