Today, we at A Book of Cookrye desired variety in our lives! Because of the intermittent grocery shortages and general laziness, most of our suppers have been variations of the classic "Throw what's on hand into a pan and come back when it's baked" style of cooking, and decided we want dessert! Maybe in the future we'll look fondly back at this time when you had to be creative when planning meals around what was available and what was on sale, but right now we want chocolate.


Because we haven't gone to the grocery store in a while, we had to fudge the recipe just a little bit. We already knew we were going to use cocoa powder instead of baking chocolate because it has such a long shelf life. Baking chocolate can go rancid after a few months (especially if the house isn't always kept cool), but cocoa powder can last years. It generally doesn't get the chance to demonstrate its longevity in our presence, but a can of that magical brown fairy-dust lasts through so many more creations than a box of baking chocolate squares. Ever since the Baker Company cut their chocolate boxes in half (which we are still irked about), a recipe like this would have literally used up a whole package. 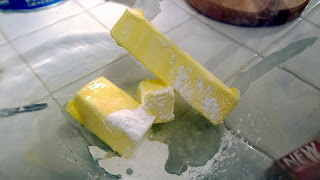 We must admit we're fudging here and using margarine instead of butter, which is something we do a lot in brownies anyway. But we nearly ran into a brownie-cancelling halt: there wasn't enough margarine. We added cooking oil to make up for the deficiency. We figured it'd be fine since that's what brownie mixes use. Also, it's still mostly butter (or a decent imitation). You probably won't notice the difference once we get chocolate on it. 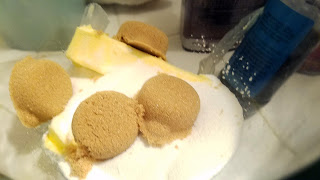 Rose Sabol of Whiting, Indiana seems to have put a lot of thought into this recipe. Most brownie recipes we see just have you dump all the ingredients in a bowl (or sometimes right into the pan). Rose Sabol, on the other hand, has decided that she wants a little brown sugar flavor but not too much. Most recipes will just do half brown and half white sugar, but today we are adding just a smidge of brown. I can only assume that this was arrived at after careful deliberation in the Sabol kitchen. 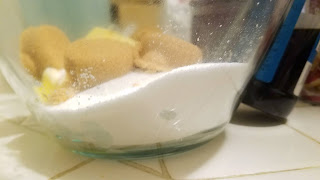 Also of note: this recipe actually has leavening from whipped egg whites. We've only seen one other brownie recipe that did that, and it was in a Betty Crocker handout. Out of curiosity, we checked to see if we were making the same recipe (with perhaps a few alterations over the years). After all, a lot of these community cookbooks have recipes that come directly from ingredient labels or from magazine ads. Even today, when copyright law is more enforced than ever, it seems that food companies have unofficially decided not to sue groups like the West Puskahosee Methodist Ladies' Auxiliary for including company-developed and copyrighted recipes in their community cookbooks. Anyway, despite having an odd similarity in the directions, this recipe is not the one from the Betty Crocker handout from 16 years earlier. 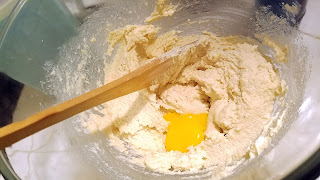 Anyway, we got this beaten good and well. We had a happy bowl of buttery, sugary goodness, whipped to airy perfection. What better landing place could there be for our wonderful chocolate? 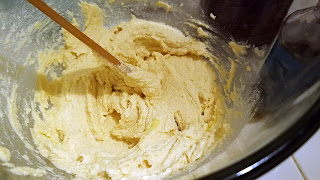 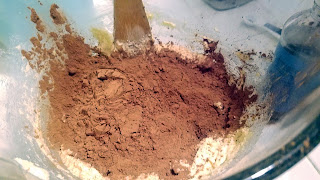 We were perhaps a teensy bit too excited at bringing more chocolate into our lives. With one overenthusiastic stroke of the spoon, we made a mess of the cocoa powder. If you've read about any of our previous culinary perpetrations, you'll know that this happens a lot. 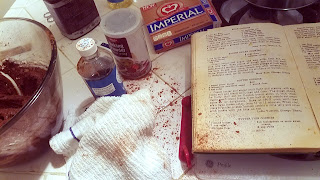 Well, after that brief detour with a wet rag, let's see the amazing delight that awaits us in the bowl! It really looks like it's made with the richest and best ingredients rather than a lot of second- and third-choice substitutions based on what was on hand. Better yet, it tasted like we had made it exactly according to the directions with all the real butter and chocolate squares the Slovak-American Ladies' Union could have dreamed of. 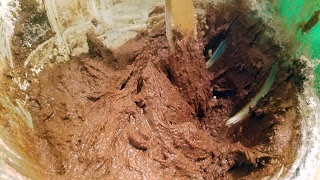 And so, we get to the whipping-up of the egg white. Here we must register surprise. The exact model of mixer we once had (before it fell from its precarious shelf and never turned on again) appeared when we rummaged in the drawer! Here is mine before it tragically fell and broke, seen when we were testing the theory that you can substitute Diet Coke for eggs:

It's always a bit of a hunt to find all the pieces of an appliance when it's long been disused. You can generally assume that if the motor turned up in a drawer, the rest of the attachments will probably be somewhere. Very few people keep a food processor motor base and throw out the blades. But when you're using an appliance that hasn't been plugged in for a few decades, the pitchers, beaters, blades, or whatever's supposed to go with it may lie in a very remote place, buried under strata of things that were never gotten rid of. In kitchens with enough storage space to forget things, the old appliances may be layered by the decade, as replacements and upgrades were purchased but someone said "We can't throw the old one away! It still works!"
We eventually found the beaters for this mixer buried in the back of a different drawer and it was like an unexpected and very welcome reunion between self and appliance. 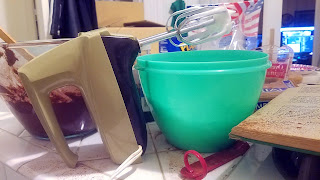 I still find it unusual that we're supposed to do anything that involves skill in a brownie recipe. Most of the brownie recipes I've seen, whether they're very old or whether they came out this year, are extremely easy to make. In fact, they are so easy that the existence of brownie mix actually confounds me. It's almost as if most recipe creators intended brownies to be for those who never learned to bake but want to make something delicious. In that sense, brownies are a bit like the casseroles of desserts: if you can get all your ingredients into the same pan, you will almost certainly get what you wanted after baking. We therefore find it strange that today's brownie recipe requires you to have that practiced knack of carefully folding in egg whites without deflating them. 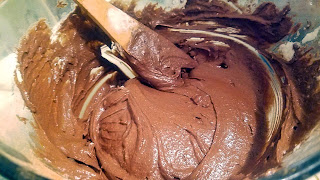 To our amazement and surprise, that one whipped egg white turned a bowl of chocolate clay into a beautiful, creamy, dreamy, amazing delight that makes you want to just get out a ladle and eat. If Rose Sabol of Whiting, Indiana made recipes that looked this good, she better have gotten all the respect she deserved for her baking. Just look at this pan of chocolate divine! 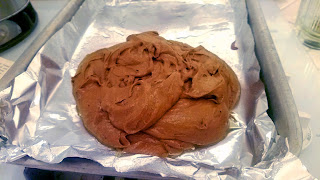 Spread into the pan, it looked less like uncooked batter and more like a delicious chocolate mousse. I swear, one day I am going to put a batch of cake or brownie batter into an ice cream freezer instead of an oven and see what happens. 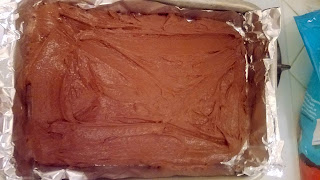 You know how we said we didn't want to bake this because the batter was so good? When we saw this desiccated-looking pan of brown come out of the oven, we suspected that we shouldn't have. "The batter was so delicious!" we said to ourselves. "Why did it have to go in the oven?" 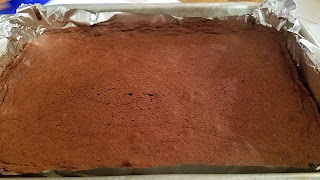 But our fears were assuaged when we cut these open and saw the inky black that lay below. Not that baking improved the batter, but it at least didn't make it worse. 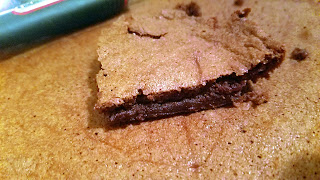 As soon as we bit into one, we forgave Rose Sabol of Whiting, Indiana for making us bake these after mixing them. They are marvelously chocolaty, and somehow simultaneously light and airy yet wonderfully dense. It was like a very light cake that somehow turned to fudge while you ate it. This recipe may involve a few more bowls than most brownie recipes do, but you owe it to yourself if you love chocolate. 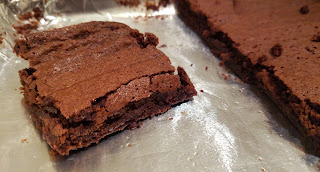