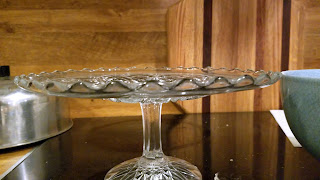 Our Mom of Cookrye bought this from an estate sale-- sort of. Is it an estate sale if they're still alive to sell everything personally? Anyway, one of my grandmother's friends was moving out of her family-sized house into something much smaller. Our Mom of Cookrye bought this at the house sale, and it is still known in our house as "Mrs. Masseth's Cake Plate." It's a bit smaller than cake plates usually are, but we thought it was so pretty we hunted down some special smaller cake pans just so we could make a cake that fits on it. Then we lost Mrs. Masseth's Cake Plate.
We've been looking for it for years, and were sure it was in one of the many boxes that we have dutifully carried from garage to garage as we periodically take a new address. Either that, or someone had broken it a long time ago and the pieces had furtively gone on to the trash. However, it turned up.....
.....
.....
.....
on the knickknack shelf which holds all the pictures and a lot of keepsakes. Our great-uncle's railroad signalman's lantern (which he bought when the Chicago Transit Authority sold off all their kerosene lights) was perched on top of it. Mrs. Masseth's cake plate has lived in plain sight with all the other sentimental keepsakes all this time, and none of us noticed that it has spent a few years as a lantern stand. And we personally use this lantern all the time! How did we not notice it was on Mrs. Masseth's cake plate every time we took it off the shelf to go tend the garden at night? And how did we not notice Mrs. Masseth's cake plate every time we put the lantern back?

Upon finding Mrs. Masseth's cake plate after several years of wondering where it went every time we had a party, we had to commemorate its return to us! (We also had a new thing to contemplate: how special are those priceless photos and treasures if we can ignore them so much we forget what's there?) But unfortunately for cake-worthy parties, there's a plague on. Since we weren't about to have a lot of people over, we couldn't put a cake on Mrs. Masseth's cake plate. We needed a special treat with a bit more of a shelf life.

Looks pretty good, doesn't it? This is at the bottom of a post on Mid-Century Menu. She didn't write about this recipe, but instead noted at the bottom that she really liked them. We've made a few recipes from her site, and every time she says one is good, she is right (even when putting mashed potatoes into coconut candy).
True, ground almonds are a bit expensive, but we still have a bag of almond meal left over from an attempt at going gluten-free. While it was feasible to avoid gluten (especially since stores routinely stock gluten-free things and it's not a novelty craze anymore),  going gluten-free didn't help any of us get slimmer and trimmer.  This failure to feel miraculously healthier for eating brown-rice pasta may be due (at least in part) to the fact that you can make gluten-free recipes that start out looking like this. 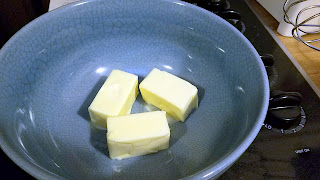 We used to mutter about people who don't know what a gluten is but heard on the morning talk show that it's bad for you. But our friends with wheat allergies report that they can now eat whatever they want instead of being restricted to the back shelf of the bland aisle at a health food store. Besides, we get to watch the absurd end results of people basing their diets on what those perky TV hosts told them to do. Like how for some reason a lot of people went keto and decided that involved drinking lots of cream. We at A Book of Cookrye aren't going to pretend that adding almonds to these cookies will make them better for you. Almonds may be just now coming off of their time in the superfood spotlight, but this recipe starts off like this. 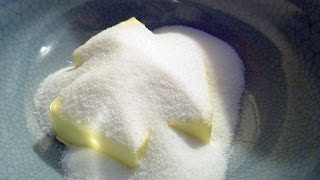 As a friend said (and this line has almost certainly been in circulation for some time), half of the really good recipes begin with "Brown the beef and onions..." and the other half begin with "Cream the butter and sugar..." 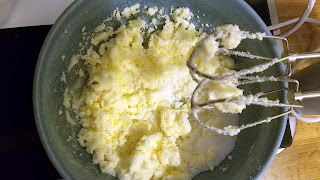 And now, we reach that most special moment: we add the title ingredient to this recipe! I always feel a bit bad when cooking with things so extravagant as ground almonds. Have you priced ground almonds lately? Whenever expensive ingredients get involved, I always feel like my recipe is not worthy. This has caused some sad wastage. We nearly lost all the fresh rhubarb in our refrigerator to mold before we decided to make it rumble. So as we dumped the expensive almond meal into the cookie dough, we told ourselves that we must bake it or else it will go rancid and be a total waste instead of just going into a cookie recipe. We can't wait for a almond-worthy recipe to be hand-delivered to us by the gods with a certificate of divine endorsement. 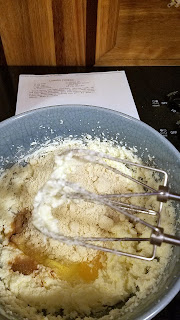 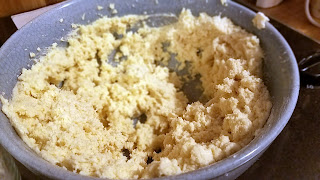 If you're buying almond meal instead of grinding them yourself, this recipe basically flies together. Before we knew it, we were ready for the long slog of baking almost 4 dozen cookies in an oven that only holds one sheet pan at a time. Even though the cookies are really tiny and therefore will bake fast (and also we can get a lot of them on one pan), that is a long time to pull baking sheets in and out of the oven. While we were waiting for the first batch to bake, we started shaping the remaining dough into teaspoon-sized balls. We thought it would be more... presentational. Or something like that. We just dropped first batch from a teaspoon and got a pan of teaspoon-sized splats, but these would theoretically look nicer. Besides, what else were we doing while waiting for things to come out of the oven? You can only wipe the counter so many times before you go from tidy to obsessive.
Also, if you're wondering why Our House of Cookrye has made such a big deal of Mrs. Masseth's Cake Plate, it's because from the top it looks like this. 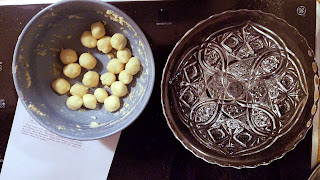 And here's the first batch. Because we took the line "drop from a teaspoon onto greased cookie sheet" literally, they really are just teaspoon-sized splats of cookie dough. As we were plopping the misshapen dough blobs onto the cookie sheet like cafeteria mashed potatoes, we had to tell ourselves that this recipe may not have come to us from Mrs. Goodfellow in her own handwriting, we had to use the precious ground almonds in something because they don't keep forever. 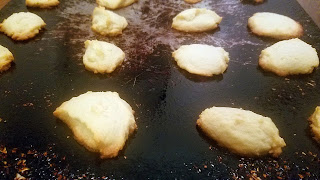 The rest of the cookies did not look so higgledy-piggledy since we had time to make them look nice and neat. We then regretted this, because the dropped ones look so gosh-darn adorable and the nicely shaped ones look so mechanically uniform. We also made a mistake in baking the later batches- since the first ones baked at the recipe-specified temperature got brown really quickly while the inside still seemed nearly raw, we assumed our oven was running a little bit hot and lowered the temperature. We should not have done that. In the end, the first batch was perfectly soft and just right in the middle, but the later ones were crunchy all the way through (although this did make them perfect for dunking in tea). 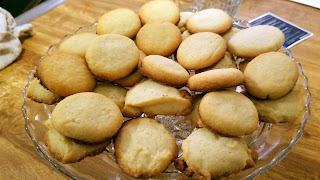 With that said, this really is a fantastic recipe. They're utterly delicious, and just a smidge softer than shortbread. If you like using almond extract in things, you really need to try these. If you don't, you should try them anyway because they're amazing.
Posted by S. S. at 9:01 PM