We at A Book of Cookrye never liked broccoli. From its bitter taste to the inevitable backwind, broccoli is something we deeply regret every time we eat it. We are not alone in this distaste- President George Bush the Elder made a national statement declaring that now that he was president, no one could make him eat broccoli (We're not making this up: see the video here). However, you know what we hate more than broccoli? Wasting food. And so.... this turned up in the refrigerator. 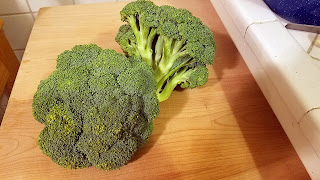 However, we at A Book of Cookrye live in America. And you know what we do in America when we hate the taste of a food and are too lazy to batter and fry it? We cover it in cheese!


I have to admit, I've cooked broccoli a few times (for other people), but it has always been frozen. Usually it was already chopped. We had no idea how to even start cutting these things, so we cleft one in twain. 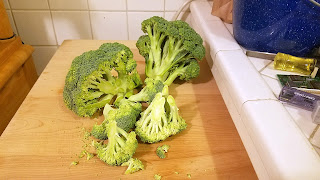 Some of the pieces that fell off looked like the ones that show up on those raw vegetable trays with ranch dressing tubs. As we were nearly done with cooking school before the plague hit, we should have been able to competently chop it. Instead we had hacked at it with the knife until they looked small enough.
With the second--- bunch? bouquet? clump?---  of broccoli, we decided to try shaving off the bushy end and see if it was a faster route to finely-chopped broccoli. The exposed botanical cross-section was interesting to look at. 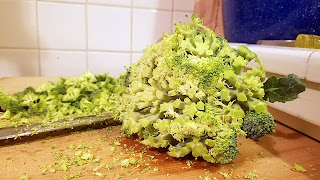 This way yields tiny bits of broccoli much faster than the other way. It falls off the already decently atomized. In pleasantly short order, we had reduced the broccoli to a lot of little bits, and a stumpy-looking core. 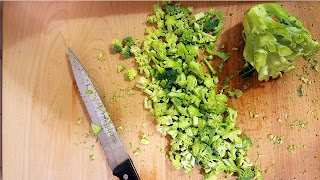 In case the whole broccoli is edible and not just the skinny bits, we chopped up the core and added it to the bowl. 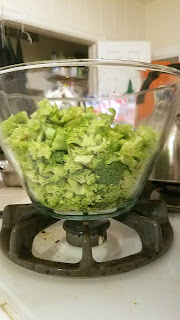 As we all know, casseroles do not bake long enough to actually cook most of your ingredients. It is customary to boil vegetables, but we decided to microwave them instead. We've discovered that most vegetables that you would have otherwise boiled taste much better if you microwave them, adding perhaps a little water to make steam as they cook. While the microwave dealt with the broccoli, we could make the cheese sauce. We did not measure the cheese, but instead grated it off of the cheese brick until the remainder was small enough to fit in a bag. 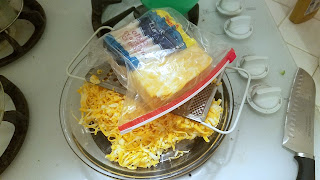 For some reason we felt like putting more effort into this than just dumping shredded cheese on the broccoli and baking until melted. If you're going to make your own gravy and are using a cheap saucepan has nothing more than a thin layer of sheet metal on the bottom, prepare to tell everyone that you thought browned butter would enhance the flavor because your butter do its damnedest to burn. It won't matter how good your pot-scraping technique is. 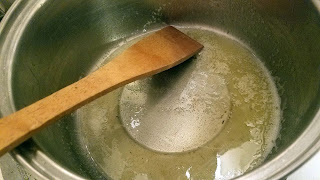 We decided to make brown gravy to hide the brown specks. Because groceries are getting sporadic and expensive, we used water instead of milk. To make up for the plague-induced parsimony, we dug out a canister of powdered beef bouillon (a word that defies all my attempts to spell it) that had hardened into a brick. 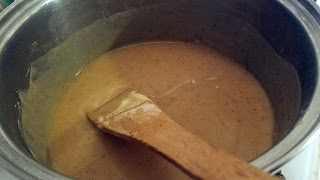 As groceries become sporadic and more expensive, we now understand why so many recipe books from earlier decades used massive quantities of white sauce and brown gravy in nearly everything- it's so cheap! The main ingredients are merely a handful of flour, a knob of whatever fat is on hand, and either milk (on a good week) or water from the tap (when the budget's looking tiny). It also makes it look like you have a lot more food in the pan than you do- today it's making two broccoli bunches look like a whole casserole. And when there's a bit of extra grocery money left, you can add a massive mound of cheesy goodness to the pot. 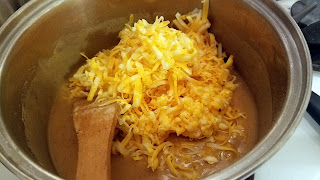 We intended that the cheese should melt on contact with hot gravy, but instead it spent a long time in looking like this. 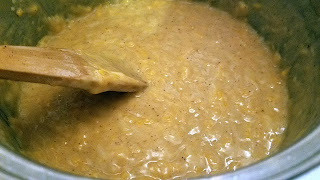 But eventually, having spent a lot of time mercilessly beating it over a low burner, we had... this! It's the consistency of cake batter and full of cheese. I don't usually like gravy, in fact I think it basically tastes like barely-seasoned paste. But this pot of cheesy goodness was amazing. Since we'd cooked the flour and butter to a medium-to-dark brown before adding the water, it tasted like cheese on toast. 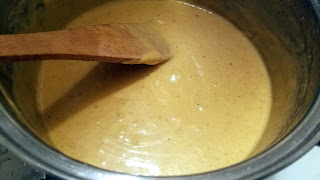 Now, the trouble with a lot of casseroles is that they never really set when you bake them. Instead, they stay exactly as goopy as when you put them in the oven. In an attempt to forestall making a pan of formless broccoli-cheese ooze, we used something we learned when making British moussaka. 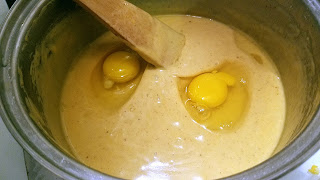 In theory, the eggs would help the whole thing set like a sort of baked custard that has broccoli in it, making it the gravy-quiche of your childhood's worst nightmares.  They made the sauce a little bit gelatinous once we had them mixed in. 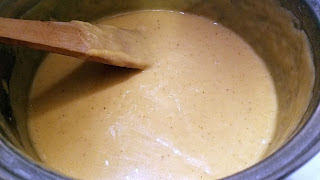 All right, we didn't come here for fun with cheese. We're here because of vegetables. And don't they look steamed to... uh... perfection? 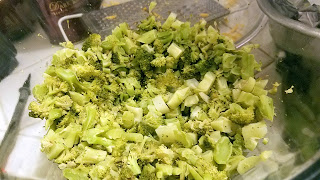 Luckily, we only had to actually look at them for a brief yet wince-inducing moment before dumping the magic cheese on it. 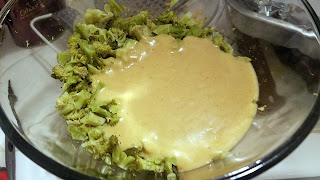 If we look at this sideways, we can see the cheesy ooze penetrating deep into the broccoli before we even start stirring. I haven't used a transparent mixing bowl in a long time, so I've never thought about what a recipe in progress looks like in cross section. 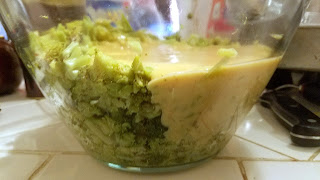 Things looked dire in the mixing bowl once we started stirring. The broccoli shrank to near-nothing (you can see the original waterline well above its current level) and made our creamy-dreamy cheese sauce so runny it was practically water again. 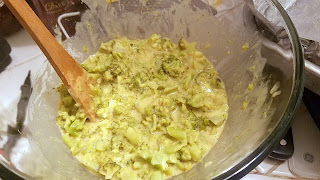 I practically never make gravy and I never make cheese sauce. Furthermore, there are two eggs (that I can never get back) in this bowl of vegetable-based disappointment. We decided to dump them in the pan and just see what we would have to choke down while telling ourselves we were better people for not throwing away the broccoli. 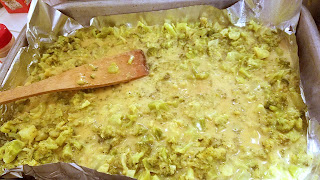 We had set aside some of the cheese to put on top (because every good casserole has cheese on top), but it appeared that we didn't set aside enough. Those poor lonely cheese shreds looked overwhelmed by the task of making the broccoli underneath them edible. 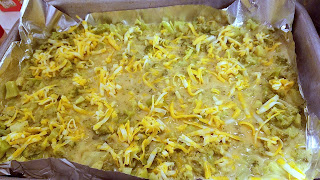 As it baked, the combination of cheese and bitter vegetables made the kitchen smell like my aunt's house on Thanksgiving when multiple casseroles are rewarming in the overcrowded oven. The pan of baked things looked like it would have been right at home on the Thanksgiving table. Fortunately, the cheese on top spread a lot more than anticipated, giving us surprisingly-adequate coverage of the vegetable matter below. 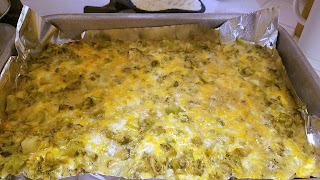 You will be pleased to know that whatever else happened here, this was at least sliceable.  In fact, it lifted rather neatly out of the pan. 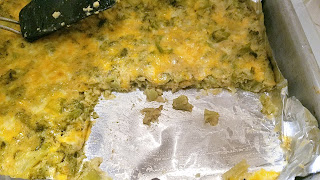 You know there may be slight problems with your food choices when the first positive thing you can think of is "You can slice it!"
As for the flavor of what we have wrought, imagine if you took a pan of baked macaroni and cheese and replaced the noodles with broccoli. The cheese didn't completely hide the taste, or even come close to it. But it did make it bearable if one ate it fast enough. If you like broccoli, you will very likely think it's a really good . If you don't, this is a decent way to make it bearable. And besides, you can slice it. 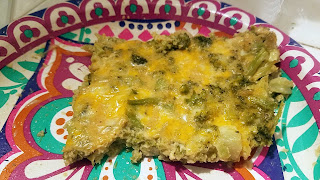