Brownies so easy you don't even need a bowl!

Greetings from all of us at A Book of Cookrye! Things have taken a bit of a downward slump since last time, haven't they? You just never know when your life will thrown aside because of a worldwide plague. As we currently work in the event and entertainment industry, we've had a bit more downtime than we planned. Does this have anything to do with today's dish? No. 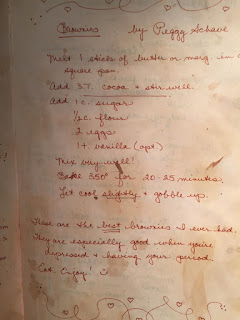 This recipe comes to us from one of our teachers' daughters. She posted that she'd made their family's favorite brownie recipe. Her mom (viz. my teacher) commented that it was the indeed the best brownie recipe ever. We asked if she might type it out and share, and she almost immediately answered with the recipe you see above.


We at A Book of Cookrye, ever without a dishwasher are always fans of recipes that minimize dishes. This one doesn't even have us getting out a bowl!

This recipe doesn't feel like baking. It feels like a first-grade craft project. We're not mixing anything, we're just smearing things around in a pan like fingerpaints. We got out the whisk to try to bust up the clumps, but all it did was push them to new and unexplored parts of the pan. 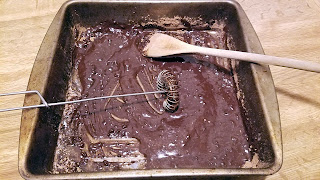 After a few minutes of making a mess in the pan, the cocoa-butter paste wasn't mixing, it was hardening. The butter was un-melting and taking the cocoa powder with it, giving us this sort of paste-like mess. I could try to get all sales-pitch-like and say it was sooooo fudgy, but it was more like hot glue while it's still a little bit warm. We decided it was time to dump everything else in here and let fate ensue. 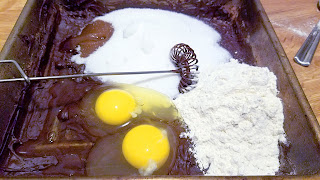 The last time I made a recipe that looked like this, it was a group activity in preschool. In retrospect, I'm quite sure the teacher's assistant mixed a second batch of cookies behind our backs and switched them out.

After some more bashing with a whisk, we had a cohesive brownie batter! Sure there are some clumps that never quite broke down, but we held out hope that they'd be nice chocolate nuggets afterward. We once went to a bakery that stirred little pieces of unsweetened chocolate into the brownies. Maybe these cocoa clods glued together with solidified butter would have the same delightful effect. 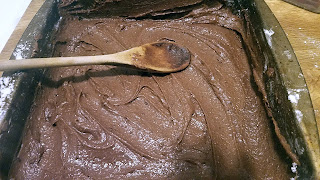 This is how you know this recipe will make its way into our permanent rotation: these are literally all the dishes that waited for washing. Remember, we have to do all of the dishes by hand like dishwashers haven't been invented yet. So seeing this barely-existent mess was almost as good as chocolate. 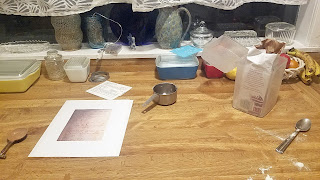 I must say, when we saw that this recipe uses only three spoons of cocoa powder, we were afraid it would be one of those dreadfully bland brownies that barely have enough chocolate to color them and give you false hopes. We only gave this recipe a shot because two people we trust both said it's amazing. They were right. When we tasted the batter, it was so deliciously chocolatey that we deeply regretted mixing them in the pan. We couldn't deliberately do a bad job of scraping out the bowl and then eat batter while they baked. And look at how fantastically dark and divine these look now that we've baked them! 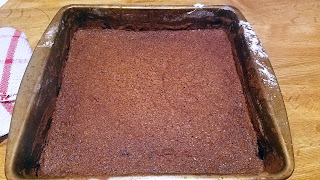 All right, so that looks sad, joyless, and burnt. Let's try this again: 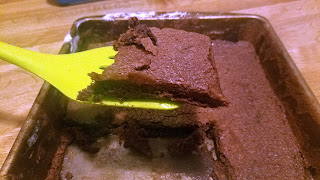 These brownies were so delicious my camera couldn't even try to capture their divine wonderfulness. And you can just mix them right in the pan! You owe it to yourself to try these.
Posted by S. S. at 7:02 PM