Banana bread-- except with plantains!

Today on A Book of Cookrye, we are trying an idea we've been pondering since we first put plantains on a waffle iron: since plantains taste a lot more like artificial banana flavoring than actual bananas do, what happens if we use plantains instead of bananas in banana bread?


This comes to us from the 1892-1952 Anniversary Slovak-American Cook Book. It turned up on a friend's bookshelf. We were drawn to it because it looked so worn and old next to all the other books it lived with. The photo below is making the cover a lot more legible than it is in person; in reality the cover is so dark and the printing ink so worn off that it's a little hard to read.
I'm surprised that the first thing we're making out of this book is so ordinary. We're not doing the poppyseed bread-braid, the prune pie, the cabbage strudel, the kolačky, the rožky, the panchuski, the pirohy, or anything else that is at all from eastern Europe. We're making banana bread. 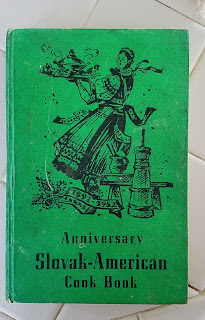 We're choosing the recipe at the top of the page because we don't have buttermilk, and also because someone has handwritten notes on it. At first we thought it was someone tweaking the amounts to their taste, but it's actually someone doubling the whole recipe. Sometimes you see check marks or notes like "Good!" next to a recipe, but there's no better endorsement than "This recipe's so good we wanted more!" Also, I respect the previous cook's honesty with their own bad math. Those notes mean "I'll forget how much I'm supposed to use now that I'm doubling the recipe, so I'm going to forestall my own failure and just write it out so I can't mess it up!" It's just like how we at A Book of Cookrye put our car keys on things we absolutely cannot forget to take with us when we're going somewhere. You know your own airheadedness and plan for it.
Note that the recipe calls for "spry or margarine." I note with interest that Spry was apparently so common in Indiana that Mrs. Tony Benkus didn't even capitalize it. Spry was a brand of shortening from Lever Brothers (now called Unilever) that tried and failed to knock down Crisco. They had a matronly mascot named Aunt Jenny with a perpetual oversized smile, a fanatical obsession with Spry shortening that caused her to turn every neighborly visit into a sales pitch, and a folksy accent that rivaled Josiah Allen's wife.

Aunt Jenny was Lever's attempt to copy Betty Crocker, who had become one of the most profitable fictitious faces in the history of flour. But at least the Betty Crocker writers had her step off of product-schilling long enough to talk about other things and seem like a real person. Advertisements showed Aunt Jenny giving "thrifty three-pound cans" of Spry and Spry recipe pamphlets to brides as wedding presents, and proclaiming that foods fried in Spry were "so digestible even children can eat'em." If you'd like to see what happens when an ad firm of men try to sound like a grandmother-aged woman with a passion for trans fats, here is a tribute to Aunt Jenny and her thrifty three-pound cans of Spry! 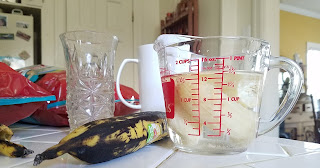 Back to the recipe. Today we're using plantains, but we didn't know how big a plantain is compared to a banana. We decided to do the volume-displacement test: You put exactly one cup of water in a measuring cup, shove in the plantain (in pieces if necessary), and the waterline will tell you precisely how many cups of plantain you have.
We decided not to cook the plantains before baking them. Yes, we know you are supposed to cook plantains before you eat them, but we were afraid that after pre-cooking the plantains and then baking for nearly an hour, all the taste would be cooked completely out. However, plantains are a lot more fibrous than bananas. We didn't think just mashing them with a fork like you do bananas would be enough- the plantain bread might be too stringy. So we got out the power tools. Fortunately, there's enough liquids in this recipe to make blenderizing possible. 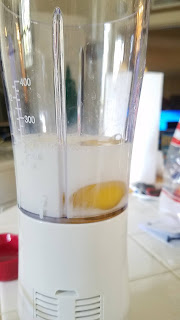 And so, we just sort of smashed the plantains in there. This particular stage of the recipe looks like something a fitness enthusiast who's gone round the twist might do to themselves with a few scoops of protein powder added. I've previously expressed my confusion at the odd practice of gym nuts taking what could have been a perfectly lovely salad or snack and putting it in a blender. I would swear I've seen someone doing a banana-egg-milk blender-paste instead of eating the banana, drinking the milk, and either scrambling or boiling the eggs. 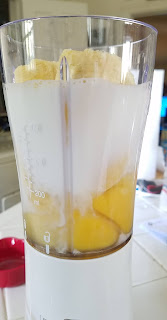 Anyway, the plantain blenderized almost immediately. But then everything in the blender started whipping up very nicely. We could actually see the waterline rising. So we let it get nice and aerated until it reached the top of the blender, which would hopefully add extra lightness to the bread. 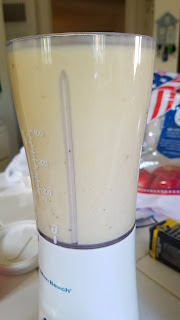 And so, after that quasi-health-food interval, we return to where we at A Book of Cookrye end up so very often: making close friends with butter and sugar! I almost always use brown sugar in banana bread because I like the extra flavor it adds. But for this experiment, I used white. I wanted to see precisely what flavor we get from plantains with minimal things to hide it. 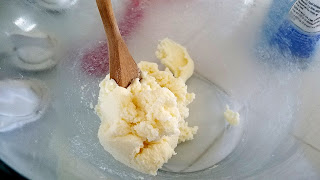 Now, at this point we would have added the eggs one at a time. For obvious reasons, this was now impossible. So we dumped in an egg-sized splot of the blender contents. 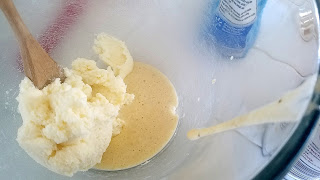 The batter looked about right, so we added the second egg-sized splatter and also a surprisingly-high dose of vanilla. Recipes like this make me glad I started using the cheaper fake vanilla. That and it turns out that you can't taste the difference after baking it anyway. Real vanilla smells so much better in the oven because the many different flavors in real vanilla beans (the ones that fake vanilla lacks) are evaporating away. 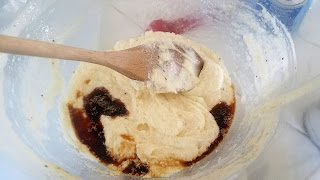 This recipe was looking promisingly normal now. You'd almost never suspect that we turned half the ingredients into a blender-goop and tried to pass it off as delightful baking. 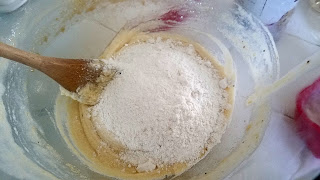 And now, to baking! We were going to use a round cake pan, but we had a lot more batter than anticipated. We rummaged through the cabinets and found this thing. 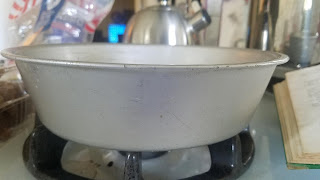 I'm not sure what this pan is for, but it appears to have spent much of its life boiling water. My first guess is that it's the insert to one of those built-in soup wells that some high-end stoves used to have. If you've never seen one, imagine someone removed a burner from your stovetop and replaced it with a pot lid. When you take the lid off, you find what basically looks like a built-in slow cooker. Here's a photo!

Since you can't lift the soup-well assembly out (it's literally bolted into the stove), they come with various pans like this to drop in there. I think this is why soup-wells went out of style. For one thing, it's hard to show your stove off to the hopefully-envious neighbors when its snazziest feature looks like you are too lazy to take a pot lid off the stove before company arrives. For another, soup wells really weren't all that much better than just putting a big pot over a burner. And obviously, they took away a stove burner that could be used for a lot of things and replaced it with a single-purpose built-in pot. 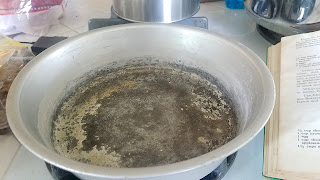 Regardless of this pan's original purpose, it is about the width of a cake pan but extra deep. So it seemed perfect for a recipe that had just a smidge too much batter to fit in a round cake pan but not quite enough to use a bigger one. Though I wondered: if the recipe for banana bread/banana cake is so amorphous that the only difference between banana bread and banana cake is the pan you cook it in, does using this stewpot make it soup? 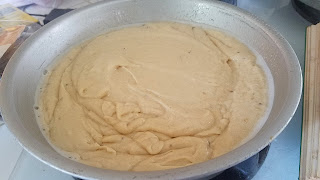 I'll be honest, the batter here tasted really good. I had high hopes that I could serve this as banana bread and not have people squint and say it tasted fishy. It was good enough that I deliberately did a bad job of scraping out the bowl so I could eat what remained. 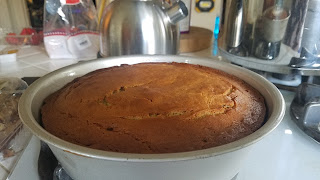 The funny thing about banana bread (or plantain bread) is that it always gets a lot darker on top than you probably think it should. You may see the crust's dark golden color and think it's done. You may also give it a light press and see that it springs back. But if you stick it with a toothpick or a fork, you may find that it is still doughy in the middle anyway. Always stab your banana bread to be sure. 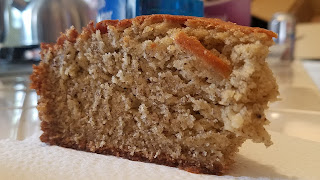 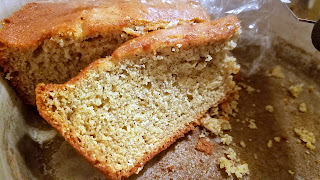