The Thrill of Cornstick Discovery

Other people might say that quarantining for months has made them batty enough to get excited about old pans, but anyone who knows me knows that I was already like this. Behold what turned up in the shed! 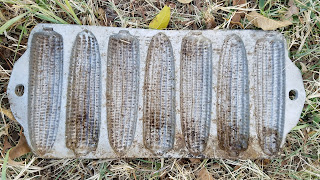 Our surprise find is a little nasty and very unfortunate-looking, but if one looks past all the grime, there's cornsticks waiting to happen! All it needed was a bit of a cleaning up to reenter service and bring corn-batter joy to everyone.

This pan has laid in repose under a leaky roof outside the house where it caught dirt, insect eggs, odd-colored roof drippings, and who knows what else. The grime defied all attempts to scour it from what was by now its ancestral home. It even resisted the pressure washer that has lived in the garage ever since one of my friends decided to resurrect a dead car. After an increasing escalation of power tools proved futile, we attempted chemical attacks.

Normally, we would not recommend toilet cleaner as food-safe, but this pan was already unfit for culinary use so it couldn't worsen anything. Besides, we were going to rinse it very well. The bottle said the active ingredient is hydrochloric acid, which we strongly hoped would be the dirt and grime's weakness. 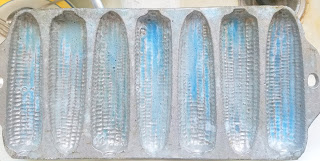 It kind of looks like an artistic color study, doesn't it?

Speaking of colors, it's interesting to note that after beating the egg and milk together and then dumping a bag of cornbread mix on top, that yellowy powder was a perfect color match for the eggy milk below. I can't see where one stops and the other starts, can you? 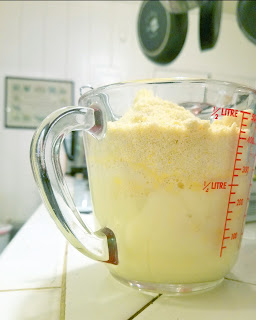 Yes, we're using cornbread mix. It was lurking in the kitchen, and this seemed as good a time as any to transform it from powder into bread.

And so, we finally get to the waiting pan! It cleaned up pretty good, didn't it? We inserted the pan into the oven so it could get nice and hot while the oven heated up. In theory, pouring the batter into a roasting-hot pan would give our cornbread-on-the-cobs an extra-crispy crust (and also give the pan a final sterilization before putting food in it).

Some light reading on the subject of cornstick pans informed us that the corn-kernel nubs in the design give them lots of extra surface area where the batter touches the pan, just like the grids on a waffle iron. This presumably means we will have a lot of crunchy crust.

As we have learned from many attempts of using old bakeware with porous designs, you don't lightly spritz them with cooking spray. You must give them a good hard KSSSSSHHHHH of spray, relentlessly applying until you have enough oil buildup to make the batter sizzle and almost fry itself on contact. To use any less cooking spray is asking for fate to give you a future that involves gouging out stuck-on bits with a fork while cursing loudly. 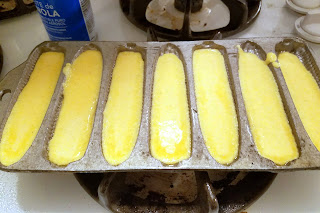 For our first batch, we treated these like cupcake pans and left a good amount of room in each batter-hole for expansion. That was unnecessary- it baked at the edges so fast it barely rose at all. The centers, however, rose to great heights. Anyone cornsticking at home can be advised that if you've heated the pan before putting batter in it, you can fill these nearly to the top without any spillover in the oven.

As one might expect when the such tiny amounts of batter are spread so thin in the pan, these things cooked quickly. We could almost see them rise. And now came the moment we had so deeply dreaded: would we successfully extract them from the pan intact, or would we spend the next hour hacking burnt-on bread off of the pan with a spoon handle? 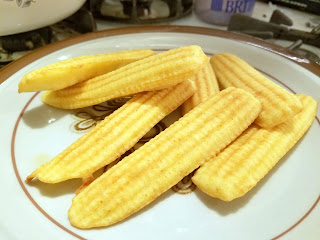 Happily, they fell right out of the pan with only the gentlest of prodding from a spoon handle. We'd hoped for a darker and crunchier crust, and might run the oven hotter next time to make it happen. As you can see, they're a bit smaller than the pan would suggest. I thought they'd be as big as actual (if a bit runty) corn cobs, but they are closer in size to the handles on a can opener. They're not as small as baby corn, but they're not bigger by as much as you may think. 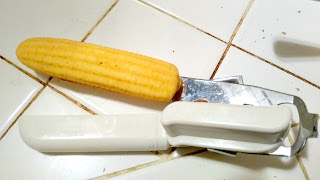 One of the others in the house had made a pot of soup, and these things were perfect with it. Even if they are a bit petite, they're the perfect with soup. The little kernel bumps on them make them more porous, so they're better at soaking up the broth when you dip. If you're making cornbread, a batch of cornsticks is not much more time or effort than just dumping all the batter into one big pan, and they're really cute. 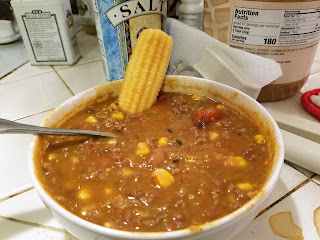