Smoked Slabs of Cow: or, A Book of Cookrye Goes Outdoors!: or, I'm probably going to regret this

Today's perpetration starts with discounted slabs of beef. We thought we might make something interesting and therefore purchased them, and froze them as soon as we got home. We then removed them from the freezer a few weeks later, but the one person who has a specific way of doing a roast was... shall we say, not doing so well. (Don't worry, it wasn't the plague.) So after a few days without cooking them, we just tucked them back into the freezer and hoped that thawing them twice wouldn't ruin them. Which brings us to today.

We've made the mistake of reading articles about how easy grilling can be, and got it into our heads to attempt to smoke them on the gas grill. In theory, you just encase the meat in foil and leave it on the grill with the burners set to low for a few hours-- or so those "It's So Easy!" articles claim. We figured this meat, which has already been thawed once and leaked a lot of juices into its shrink wrap before refreezing, was the perfect candidate for this probably misguided attempt. In our favor, we have a gas grill and a fresh propane tank. A lot of people apparently think that gas grills aren't real grills. But as someone said in a cookbook I lost long ago, "If Alain Ducasse, Michelin-star drenched chef, uses gas, then so can you." Cooking over wood or charcoal may be more authentic, but I just want to put the meat on the rack, turn on the fire, and forget about it until it's done.

We put the meat in a drawer full of water to defrost it faster. While most of today's beef adventure may seem ill-advised, I would like to pause and note how nice a designated defrosting drawer is. We emptied one of the refrigerator drawers and designated it as the place to leave frozen meats while defrosting them. If sticky juices leak out, we can just take out the whole drawer and hose it off. It's much nicer than trying to reach into the refrigerator and wipe off a shelf. You can also fill the drawer with water if you want to defrost something a lot faster. You may also remember that you're apparently supposed to soak your wood chips while the meat is thawing. 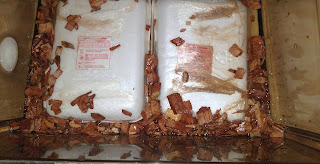 I didn't know how much wood I was supposed to put into this, but fortunately the woodchip bag had instructions on the back (they say to use two cups). So if the beef turned out to be so over-smoked that it smelled like a housefire, we could blame someone else's directions.

On The Big Day, we took the meat out, dropped it unopened into the sink, and attempted to remove all those little wood shards from the water. We got most of them out easily, but the last few of them kept running away from any scooping implement we tried. We then remembered that 1) No one's eating the wood, so we don't need to be as obsessive as usual about what it touches, and 2) after getting the plumbing redone, we had all agreed that those drain strainers would be a nice idea.

And so, we packed the wood in foil. Every article we read agreed that if you didn't pay for one of those dedicated smoking trays, you should encase the wood in foil so it doesn't get enough air to actually catch fire. That way, you get smoke instead. You then poke holes in it to release the smoke you're cultivating. 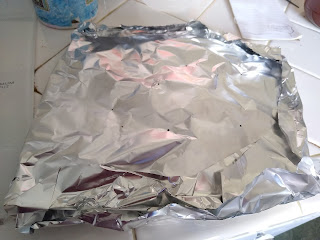 A lot of articles talk about overnight marinating, dry rubs, wet rubs, brining, and all sorts of other madness. They also devote far too many paragraphs to getting "the perfect coat of bark" on it, which apparently means they want a quarter-inch layer of pure cinders on the outside. Some people spend bizarrely excessive amounts of time attempting to cook a single piece of meat outside. If you want to, you can spend an entire month trying to make the perfect slab of dead cow. We at A Book of Cookrye didn't have time for that, so we figured we'd just coat the meat in a big squirt of barbecue sauce (with a little cider vinegar in it). To prevent getting raw-meat germs all over the bottles, we squirted it out before even touching the meat wrapper. 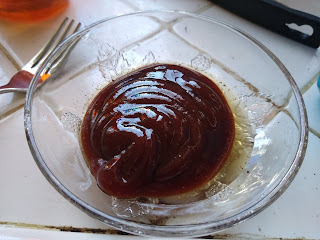 When we pulled the meat out of the drawer, ice layers had accumulated around the packages. It fell off and looked like a pair of strikingly pretty bowls. 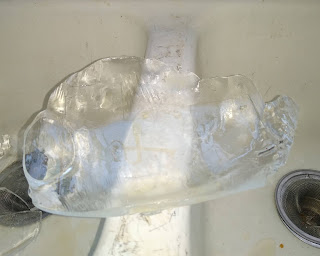 All right, let's get to the actual meat! In an attempt to make up for not bothering to marinate, we stabbed it all over with a fork before slathering it in that sweet, syrupy goodness. 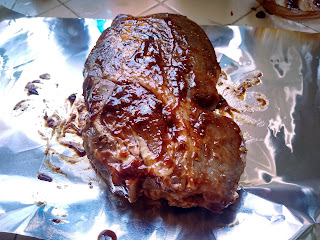 The barbecue sauce got absolutely everywhere and stank up the kitchen. I had to wash my hands, the counter, the floor, and a few nearby countertop vessels that were within splattering range. After washing my hands, I then had to wash the soap dispenser. 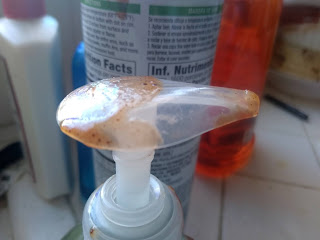 After safely encasing the drippy meat in foil, we took it outside. This is the first time I've ever tried to light a grill in daylight. You can't see the flames in the daytime. I didn't know at first if I had ignited the gas or if I was spewing unburnt propane all over the yard. Well anyway, let's shut this thing and get back in the house. 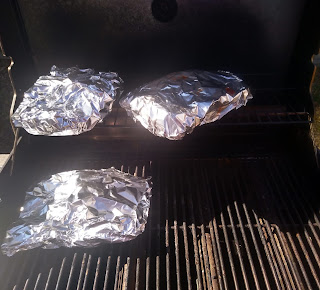 This grill happens to have a thermometer on it. Therefore, instead of just setting the burners to low and going to sleep, I spent almost an hour twiddling the gas knobs in an attempt to get the grill to hold a steady temperature. It didn't work. After a while, I was like "Wouldn't it be just wonderful if you could just set the temperature and have the gas automatically regulate itself?" I then realized that I could have just used the oven in the house. I then asked myself, "Why the heck am I doing this outside?" before shifting things around and perching the wood directly on the burner. 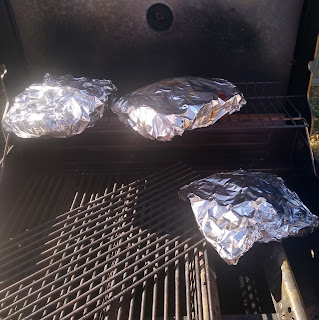 Again, I should have just used the oven. I'm very familiar with ovens. I've had a lot of success using ovens. They regulate their own temperatures. Instead of cooking the carefree, modern, thermostatically-controlled way, we're using this thing outside that ignores over a century of kitchen appliance innovation. The last time I successfully smoked anything, I did it not on a grill but on a stovetop. (Only attempt this in a very well ventilated kitchen.)

Anyway, while we were constantly going outside to see if we needed to turn the gas up or down to maintain temperature, we had plenty of time to consider the gender divisions of cooking. You may have noticed that culturally speaking, grilling is for men and anything done inside the house is for women (or at least it is in the US). This division seems to have occurred after we traded our kitchen fireplaces for stoves. Cookbooks from the days when your kitchen had a fireplace would routinely direct the lady of the house to put meat on a spit or on a gridiron over hot coals. Not a single one of them instructs you, the lady reader, to have your husband skewer up the dead pig while you get back to beating eggs and whipping cream.

I thought after a while that I finally had the perfect burner settings to hold a steady temperature. It turns out everyone else in the house was also checking on the food-in-progress and adjusting it when I wasn't looking. Therefore, the way to keep your grill at the perfect temperature is to have friends. Anyway, after 8 hours (which arbitrarily sounded right), we brought the meat off the grill and brought some delicious smells into the house. 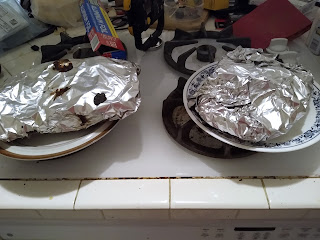 Apparently it's standard practice to let your meat rest for 15 minutes before cutting it. I thought it was just silly man-lore, but even Delia Smith tells us that we should. We therefore left both slabs in their foil for fifteen minutes, after which we unwrapped the first one and revealed cinders. Friends, there was sawdust when we tried to cut into it. 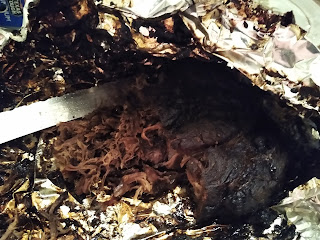 Let's have a closer look at what we're not having for dinner. 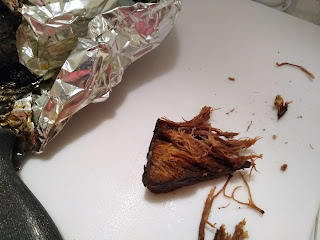 Well, at least it has a good coat of bark on it.

If you picked out the not-burnt parts, they were dry and bland but not awful. At the very least, they were not over-smoked. With that said, no one was going to eat this. We cut it up to leave outside for the feral cats that we've been encouraging to move in for pest control, and got plan B out of the oven. 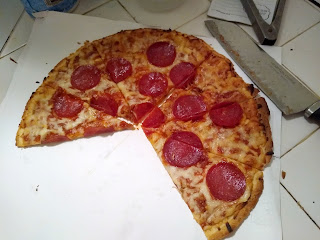 At this point, we haven't even unwrapped the second beef slab. I was tempted to throw it away in its intact foil wrapping and never speak of it again. But we decided we may as well saw it into pieces for the local wildlife. As the delicious smells of cheese and pepperoni filled the kitchen, we took a knife to the other beef cinder to reveal.... success. 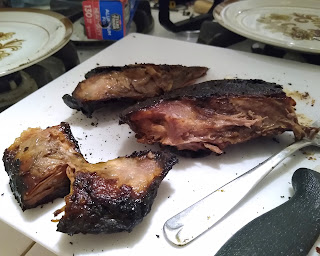 I don't know why one beef slab turned out right but the other one dried up and died. But I'll take a 50% success rate over total failure. 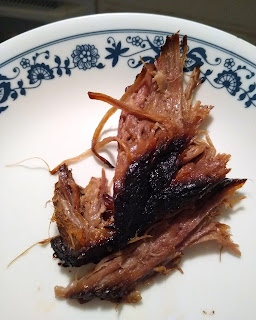 Yes, there were still a lot of burnt parts to cut off, but there was a lot of delicious slow-smoked cow. These mixed results were promising enough that while I wanted to let any future efforts drop, everyone else was already planning what we will do differently next time. But for now, there was enough decent meat to make this a semi-success. Or at least, that is what I told myself to avoid realizing that I spent 8 hours slow-cooking cat food.