Today, we at A Book of Cookrye are venturing off the banana bread path and having our bananas in cookie form!

I'd like to first note that for some reason the house has a tiny rubber spatula. It seemed useless until I had to get bananas out of a measuring cup. 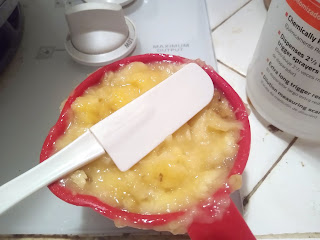 I thought Mary Skurka of Whiting, Indiana had just taken a normal recipe for oatmeal cookies and put bananas in them. I was pretty sure these cookies would either come out gummy or like freestanding cakes. Nevertheless, I haven't seen anyone else put out a recipe for banana cookies (I also haven't looked), so we begin with a big scoop of shortening.

This can of shortening has gotten bigger in my mind since Hillary Clinton's recipe told me to buy it. I haven't gotten it down from its shelf in some time. Since it has been in the back of my mind as constantly as it has been on the back of the shelf, I thought the can was big enough to contain a whole ham. I was then surprised to find that I can carry it one-handed. As you can see, it's not much bigger at the top than the measuring cup we're using. Anyway, let's have a look at the unnatural whiteness that begins this recipe! 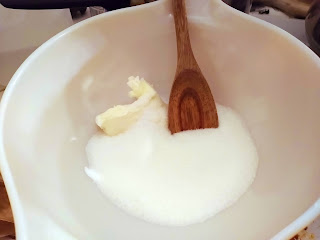 You know how we've sometimes mentioned that we are gradually snapping all the much-used wooden spoons in the kitchen? Well, the one you see there is a new one! Furthermore, it's not one of the cheap ones that love to break when you try to use them. It's so nice to use a spoon with a handle longer than a short stub again.

Getting back to the cookies, these look a lot like the Hillary Clinton recipe at this point. We started with a lot of unnaturally white paste, and now we're adding enough spices to give it a color that looks like it could occur in nature. 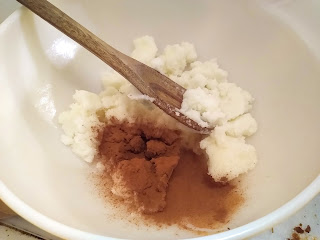 At this point, I noticed something a little odd about the recipe. Normally, one would crack in an egg or two at this creamed-until-light stage. But Mary Skurka makes no mention of such things. I thought it must be a misprint- or maybe it's one of those things that is supposed to be so obvious that she didn't need to mention it. I was going to add an egg despite the omission, but figured that leaving it out means I can blame Mary Skurka if this recipe fails.

With that said, the omission of eggs and the deployment of shortening rather than butter makes this technically a vegan recipe. This excited a friend of mine who has a vegan coworker who might like to make it. I wasn't worried about this recipe's vegan-ness ruining it (after all, one of my favorite spice cake recipes is vegan). Every bad vegan recipe I've ever made goes out of its way to tell you it's vegan, as if no one would like it otherwise. All of the other various foods that just happen to have no meat eggs or dairy tend to be as good as anything else. No one went out of their way to shove the word vegan into the title or a little note above this recipe. Therefore, this recipe is just meant to be a cookie recipe, and not one where someone smugly insists that you can in fact make tofu meringue pie and no one will tell the difference. 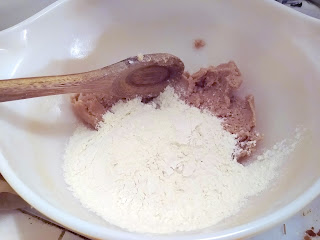 Speaking of a failed recipe, I was dead certain I had one on my hands. I've never had a cookie recipe look like sand when we should be almost done mixing it. 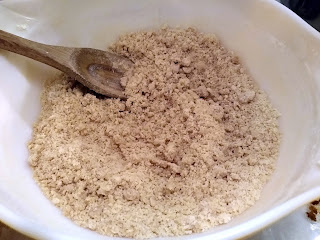 This recipe is unique among banana recipes I've made in that the bananas actually hold it together. Or at least they hopefully do. You can leave the bananas out of banana bread (or banana cake, depending on who you've asked what it's called) and still get a lovely cake. But these cookies would be nothing without our title ingredient. And also some oatmeal. 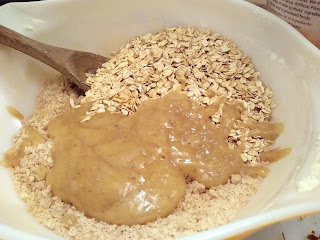 These were hard to mix together, but not for the reason you may think. The dough (if we can call it that) wasn't too stiff to push a spoon through. It was just so sandy that I couldn't stir without flinging it everywhere. Instead, I had to gently push the spoon back and forth in hopes that things in the bowl would at least sort of look like cookie dough. 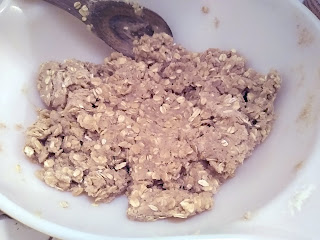 The recipe then tells us to drop the cookies onto a pan. Drop cookies are always a bit of a gamble- you never know whether they'll bake into hardened dough clumps, spread into lovely cookies, or melt into a big cookie-puddle on the pan. But (as I so often tell myself) you can't blame yourself for doing what the recipe told you to. And yet, these cookies just didn't seem like they would want to spread at all. 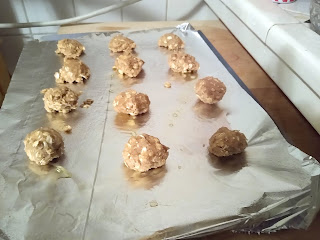 I was mostly right. The dough drooped a little in the oven, but mostly held the same shape as when it plopped out of the measuring spoon. Maybe I'm getting a bit opinionated (let's pretend this is a new development), but I don't like cookies that look like random rocks. 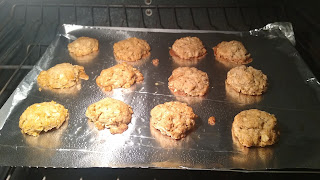 I'd thought about pressing them flat before baking, but feared that they'd spread anyway and then be too thin. However, it turns out that this is one of those recipes where the cookie dough comes out of the oven in almost the same shape as it went in. 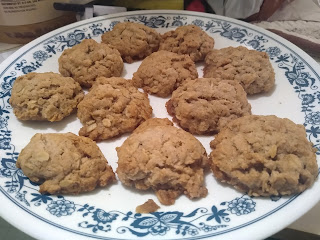 Anyway, now that we know that the dough doesn't get runny and spread before it bakes, we can ensure that we have actual cookies instead of these rock-looking things. 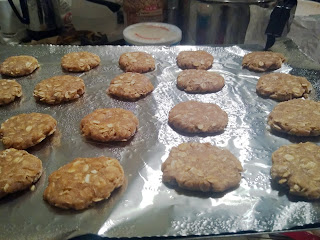 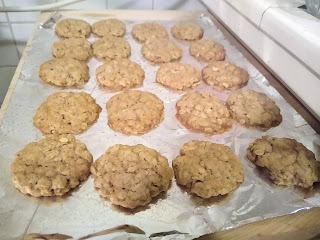 As for the taste: these are amazing. Everything about them is just perfect. The cookies are soft and dense in the middle, like brownies. They're right on the line between crisp and crunchy outside. Half of this plate was demolished in a single night. 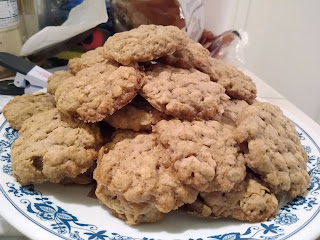