Today on A Book of Cookrye, we are making brownies that are apparently endorsed by nuns. 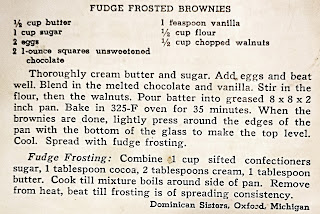 It's weird making a brownie recipe from nuns. I'd have thought that 1950s nuns would do this to anyone who asked for something so decadent:

Anyway, let's get this recipe launched with a sinful amount of butter and sugar! 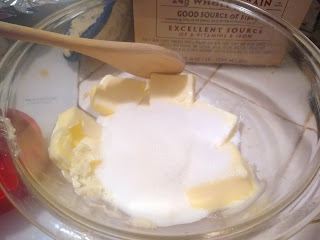 Do you believe signs of divine endorsement? Because after I measured out the cocoa powder we'd be using for this recipe as a substitute for the melted chocolate (and we're using a lot of it)... 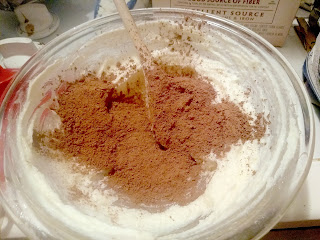 ...This is how much cocoa remained in the can. It's like the good Lord wanted us to make brownies from this recipe. 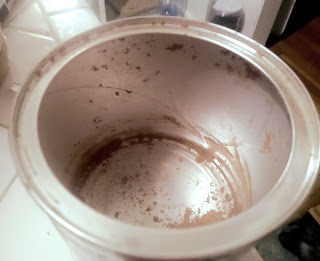 It appears that when a convent of nuns decide to partake of earthly delights, they don't half-ass it. Look at how much chocolate we have in this divinely dark mixture! 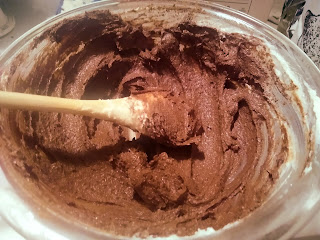 This lovely confluence of butter, sugar, and chocolate did not want to combine with the eggs. At first, we got these slimy curds of stubbornly-unmixed chocolate-butter. 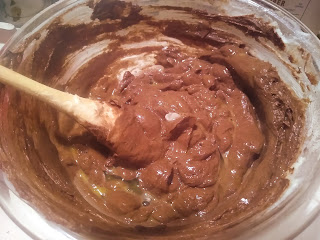 To get it all to actually mix, we needed a change of mentality. We stopped treating the bowl before us like brownies in progress, and instead gave it all the gentleness of Sister Mary Stigmata after hearing someone take the Lord's name in vain. As a reminder:

Given how many wooden spoons have already snapped in my hands during this pandemic, perhaps I shouldn't have gone full nun on the future brownies. But the Lord was with us, and both batter and spoon emerged from this intact. 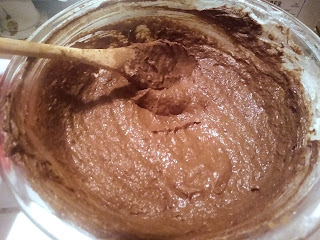 It looks like the Dominican Sisters of Oxford, Michigan decided that after such an extravagance of chocolate, it would be a sin to waste flour that could have gone towards making our daily bread. We're barely putting any in this. Look how it sits in a small, near-flat heap on top of all that chocolate. 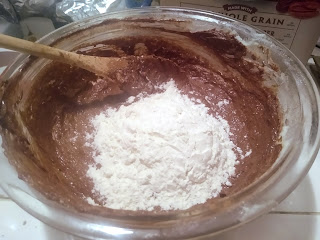 Anyone who has flipped through my previous posts will know that I have made a lot of brownie recipes. Sometimes, the batter is so runny you could pour it like syrup. Other times, it's so thick you could shape it with a spoon. Today's brownies almost looked like I could drop spoonfuls of batter onto a baking sheet like cookies and they wouldn't run together in the oven. 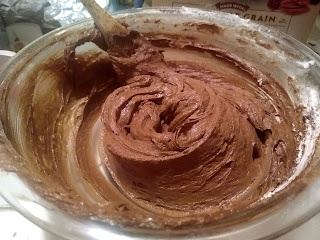 I have to say, this batter tasted amazing. I was almost thinking that the Dominican Sisters of Oxford, Michigan knew how to have a good time. But if you use the pan size prescribed, you're going to get some penitent rations. 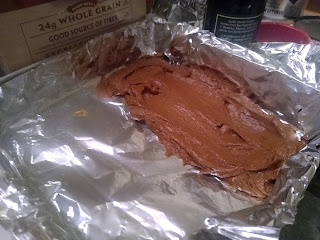 We haven't got the whole pan covered because we wanted to try this recipe in its original state (after all, is it possible to improve a recipe that came from God's kitchen?) but still had half a can of cherry pie in the refrigerator from our cherry and ham tragedy. 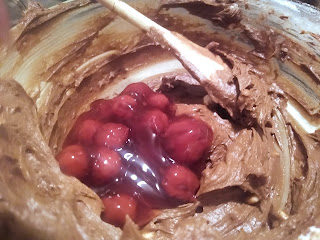 If you're going to add canned cherry pie to your brownies (which is something I like a lot), I suggest you make sure not to mix it very well. This is not the time to be a nun with a spoon instead of a yardstick. Instead, you want unmixed swirls of that glistening syrup throughout the brownies, like the caramel syrup sometimes swirled into a carton of ice cream. 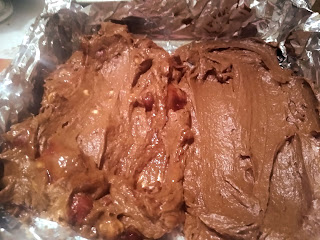 I have to say, I think God wanted me to just eat the brownie batter and forget this business of baking it. I took the pan out of the oven far earlier than the recipe said, and things were still looking a bit... overdone. 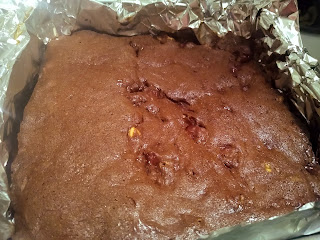 In case you're wondering what those white lumps are on the cherry side, I found a near-depleted bag of white chocolate chips and decided to dump those in also. They don't matter much because you couldn't tell they were there unless you saw them first, so we can safely forget them. I had high hopes for chocolate-cherry-white-chip brownies, but chocolate-cherry without the white chips is still a delicious pair. Anyway, these weren't burned, but they had that peculiar texture you find in baked goods that have spent several hours slowly drying out in a warming oven. 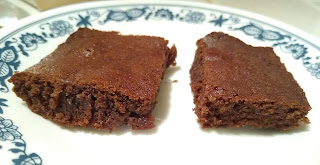 After such a deliriously chocolate-dark batter, I was disappointed that these were as dried-out and bland as the brownies that might be served next to unusually depressing cafeteria food. They have that institutional sadness to them. The cherry ones weren't as dry as the plain ones because of the extra cherry syrup mixed in, but that didn't save them. Maybe the nuns took the same approach to baking brownies as they did when baking communion wafers (which used to be an in-house operation at many convents before they got shoved out of the business).

You may have noticed that we did not make the icing that's supposed to go with these. That's because we didn't have cream, and I'm not about to buy a carton of it just to use two spoons and have the rest of it sit forgotten in the refrigerator until it expires. I felt a little bad about failure to ice these until they turned out almost dusty.

I think this recipe was perfectly fine until we got to the baking instructions. Further investigation will be required and undertaken before I write it off.