These days, it's easy to forget that French toast is one of those recipes that started off as a way to make past-their-prime foods into something nice. Long before we started just randomly battering sandwich bread because it's delicious that way, French toast was a way to get the most tooth-breakingly hard stale bread to become edible again- that's why so many recipes will tell you to put soak the bread overnight.

However, what does one do when you just found the petrified heels of a long-eaten bread loaf in the back of the refrigerator but most French toast recipes assume you have the rest of the loaf? Or when you just want to fix something nice for yourself but don't want to make enough to feed four people? 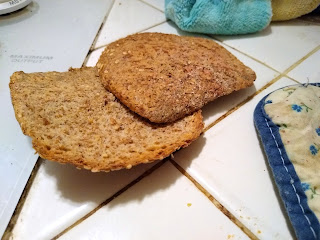 These bread-stones came from one of those multi-grain, multi-seed loaves that use half the space on the wrapper saying how they're so nutritious that you'll lose 15 pounds and have better eyesight from the superfood onslaught. But by the time I found them, they were hard and brittle. But every time you eat food instead of waste it, you keep money from going into the trash. However, what sort of soaking batter could we make in a small enough quantity to avoid wasting a whole lot of excess? Pancake mix!

I like the just-add-water pancake mixes a lot because you can make just one or two for yourself. Heck, if you wanted to make just one 2-inch pancake, you can easily reconstitute a tiny smidge of powder without trying to get out a pancake recipe and figure out what one sixteenth of an egg would look like. Or, for today's purposes, you can make just enough of it to immerse two slices of bread. 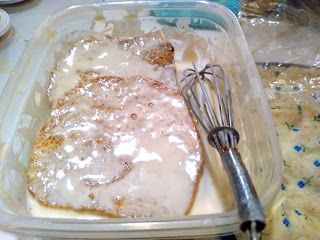 In the morning, the bread had miraculously reconstituted and seemed as fresh as when it was purchased (albeit a little soggy). It had absorbed so much water that our batter was now paste. 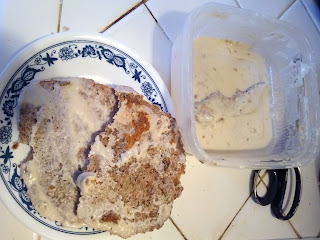 And now, we get to the other reason I wanted to make French toast out of this bread that most people would have thrown away: a cast iron griddle turned up in one of the cabinets! Finding such lovely things makes me want to use them as soon as I can find a recipe that makes a good excuse. 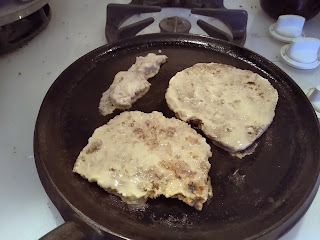 One of the bread pieces tore apart after soaking all night.  That's an encouraging sign that the bread, which earlier was as hard as the plate we set it on, was now soft enough to accidentally tear. 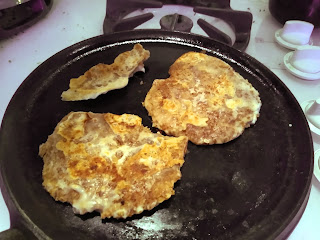 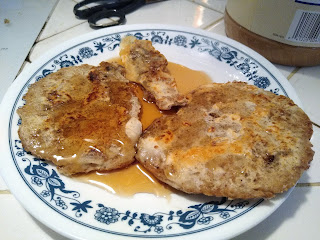 And so, we are excited to let you know that if you have just-add-water pancake mix and inedibly stale bread, you can turn it into a lovely first thing to eat in the morning. You might be wondering why we didn't just chuck the bread and make pancakes, but that would mean not getting any French toast.