Ever had a recipe that you just could not let go of?

You may remember our previous attempt at making coffee cookies with pumpkin spice chips. While the flavor was right, the cookies could have been better. It seems that removing the cocoa powder threw off a very delicate balance of ingredients.  There was so much excessive butter that they got a little bit greasy. And they didn't just spread while they baked; they melted into one big puddle of cookie dough on the pan. I'm surprised that a back-of-the-packaging promotional recipe was so easy to mess up. I thought most companies tested them to ensure that you could make some pretty severe mistakes without getting an oven full of failure. It is part of making these recipes accessible and forgiving to the many people who are making their own cookies for the first time-- or so I thought. 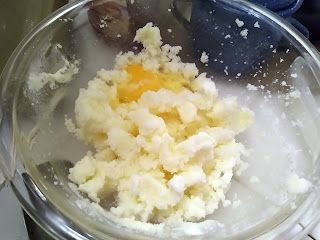 Anyway, I was feeling like a failure of a culinary student because I could not make this recipe do what I want. I was about to just look up a recipe for soft chocolate chip cookies instead of changing this one, but someone else in the house was like "No. This is a challenge." Besides, this is my idea of a good time. I've realized that I like baking more than eating the results (this does not mean I don't like delicious pastries). Therefore, messing with a recipe can provide hours of entertainment. 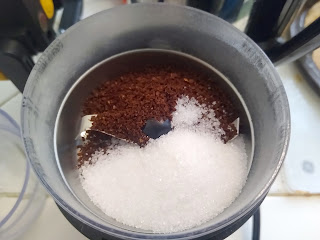 As we found last time, if you just pulverize the coffee to a fine powder it will not be gritty and ruinous. I've always thought that's why we use instant coffee in baked recipes. But after trying the daring experiment of using the same coffee that would go in the percolator to great success, we recommend that anyone who likes gratuitously adding coffee to recipes poke around in thrift shops for previously-wanted coffee grinders. In our previous attempt, Eric C. suggested in the comments that we also add sugar to the coffee grinder to perhaps pulverize the coffee a little bit more finely.

It worked really well. The coffee got reduced to an even finer powder than last time, and it didn't stick and clump to the grinder. You do have to periodically pick up the grinder and shake it to dislodge things that are a bit pressed into the sides while the blades whizz. But when you tip the grinder over, the coffee falls out so freely that this is all that remains before you even put a spoon in to dislodge what won't loosen away. 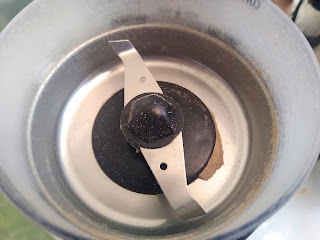 Today's recipe alterations are simple: decreasing the butter and increasing the flour. Unfortunately, I didn't know how much of one to take out and how much of the other to add. I took out two spoons of butter just because it reduced the amount to exactly one stick (and therefore eliminated having partial-sticks of butter in the refrigerator). When it came to the flour, I added as much flour as the cocoa powder we removed because it made arbitrary sense at the time.. 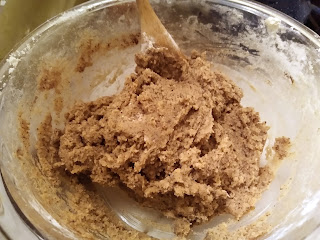 We're also using chocolate chips instead of the pumpkin-spice ones because we only have one recipe batch's worth of them left. I wanted to make sure we had the recipe right before using them up because I didn't know when I would find them for sale again. 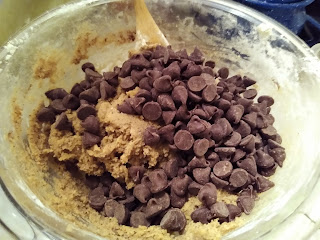 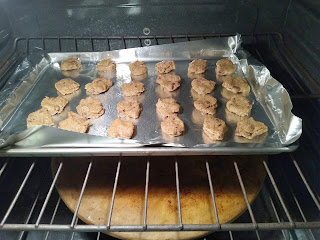 I had no idea how long to bake these things, so I decided to go with the classic "bake until golden at the edges." I won't say it's impossible to go wrong with that as a guide, but it's very difficult to ruin something to complete un-edibility. The resulting cookies were very crunchy. But not the tooth-breaking kind of crunchy- these were good. It tastes like we accidentally reverse-engineered our way to the recipe on the back of the Toll House bag-- and then added coffee to go with the chocolate chips. The coffee flavor was a lot subtler than I expected- it was only just strong enough to notice. 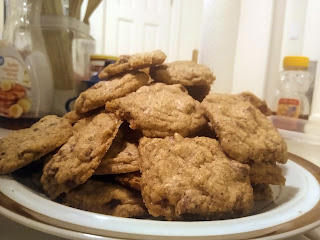 However, while we were delighted with what we got, we did not get what we sought. We really wanted soft cookies like we got when we actually made the original and unaltered recipe. Make no mistake, these cookies were so good we ate half of them trying to figure out how to get what we wanted. Then someone finished eating his seventh cookie in three minutes and said "Why don't you just bake them less?"

It seems so obvious now that it's been pointed out, doesn't it? Figuring that the worst that could happen was having unbaked hot cookie dough to eat, we put a small test batch on a sheet and baked it for half the time. 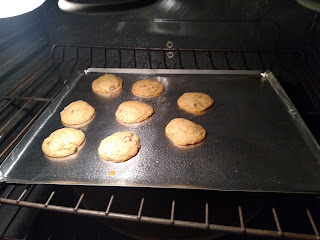 It felt silly putting those few lonely dough plops in the big oven by themselves. Now that it's getting warmer out again, I am no longer as blithe about firing up this thing and heating up the kitchen with an extravagance of electricity. On the other hand, this experiment ended exactly where we all hoped! 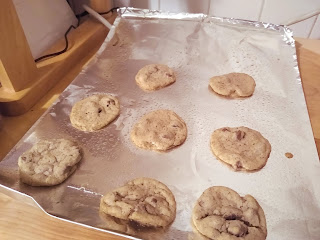 In great happiness, we baked the remaining cookie dough and finally got what we wanted! You can see how we got all of the cookies nicely spaced out on the pan and then decided that we weren't going to do an entirely separate batch with the teeny bit of extra dough in the mixing bowl, and then just sort of made it all fit whether it should have or not. 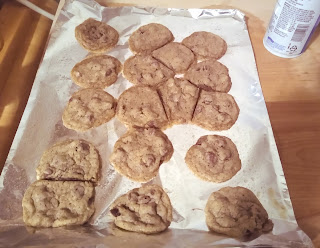 Our only disappointment was that you could barely taste the coffee in these- and why add it if you can barely tell it's there? But just like the gingerbread we made one Christmas, they just needed to ripen overnight for the flavor to make itself manifest. The coffee that was almost invisible when we baked them had strengthened marvelously by the next day.

And so, our long recipe road leads to a happy ending! Having perfected the recipe, we could make these with the pumpkin spice chips that inspired this recipe. Furthermore, now that we knew that this recipe needs a night for the coffee flavor to ripen, we could be mindful of that and... well... at least try not to eat them all right out of the oven. 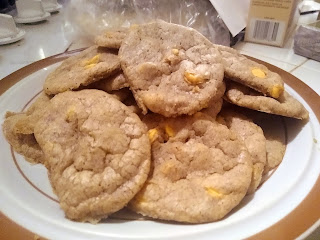 If you like your coffee to be practically a dessert with whipped cream on top, you will love these. They are fantastic. The only tragedy is that we ran out of pumpkin spice chips after this batch and therefore must hope that they reappear this autumn. It's always time for pumpkin spice if you truly believe, but pumpkin spice chips are unfortunately more rigidly seasonal.

With that said, these would be really good with white chips, chocolate chips, and chips of any flavor you think would go well with coffee (they had cinnamon chips the last time I was in the baking aisle, but it was not meant to be this week).