Today, we are taking a recipe that was so close to perfection, and making it all that we hoped for the first time!

As we noted last time, the recipe seemed really good right until we attempted to bake it. First of all, it spent far too long in the oven. Second, the pan was so big that the batter was spread almost thin enough to make crackers. To solve the latter problem, did you know that some pizza places will sell you garlic knots in the disposable pans they used? Here's one of them with the cookbook for scale.

As shown above, this pan is almost the same size as the book. And it originally arrived with garlic knots in it, which is always a delight. But more importantly, it seemed perfect for turning brownie batter into a divinely good time! 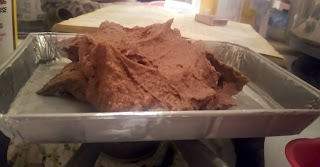 Perhaps that is why the Dominican Sisters of Oxford, Michigan decided these brownies were not unacceptably sinful. You're not going to make enough to cross gluttony off of your seven-sins list. If you can restrain yourself from trying to get a lot of brownies out of this (or do penance at the grocery cash register because you doubled the recipe), things can be very wonderful indeed. 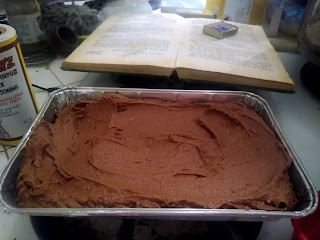 Things promised to be delicious after a very short time that seemed all the longer for the chocolate that perfumed the air. The nuns' brownies rose to exactly the top of the pan, meaning we are baking them just as God as intended.

However, I still don't that line at the end of the original recipe to level the brownies with the bottom of a glass. It certainly would work, but has anyone besides nuns ever felt the need to correct their imperfectly-levelled brownies? If you don't feel the need to bake like a yardstick-wielding nun is teaching your home economics class, they're just fine without. 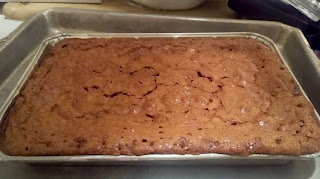 The agony replaced the ecstasy when I attempted the routine operation of cutting and lifting out a brownie. Things very literally fell apart. But if you pushed the broken brownie pieces together, you had a delicious pile of chocolate delight. 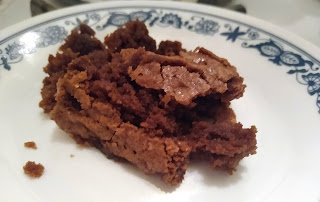 However, patience is a virtue! The next day, I tried to cut one because they had been really good even if they lacked integrity. I guess we needed to learn to wait for the Great Reward. Look at now nicely they cut! 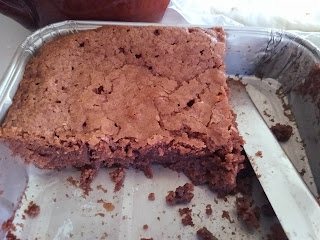 These brownies are one of my new favorites, even if you have to wait overnight before you can eat one of them in one piece. They're so rich and full of fudgy, it's almost like eating extra-dark brownie batter with a crispy top. If I decide to purchase cream, I may even make the icing. 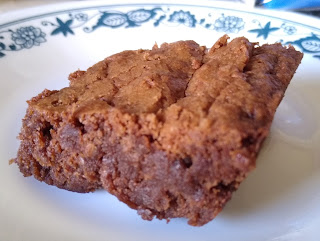