We earlier made chocolate cookies with pumpkin-spice chips. In case you don't remember, the chocolate and the pumpkin spice did not go together as well as I had expected. We speculated that, in the delicious tradition of pumpkin spice lattes, we should perhaps make the cookies again with coffee instead of chocolate.

Today's recipe starts with technical difficulties. The butter had for some reason glued itself to the refrigerator shelf. I've often seen cardboard residue in people's refrigerators, but it always looked like it had been there a long time. This is the first time I have ever left such deposits for myself. 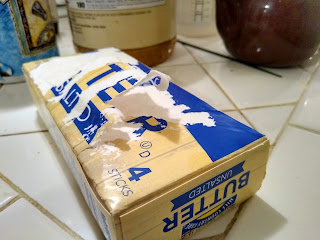 We weren't sure if we wanted to make coffee cookies or non-coffee ones. Therefore, we all agreed that we could divide the dough in half and do both. We decided to go ahead and mix the harder-to-halve ingredients before performing the bifurcation. Everything measured by the tiny spoonful gets put in now.

And now, for a brief moment of kitchen science! The original recipe tells us to use baking soda. But it also has chocolate in it which is (barely) acidic. We have removed the chocolate from the cookies, so now the baking soda has no acid to fizz with. Therefore, we are using baking powder instead because it already has enough powdered acid to fizz with itself. 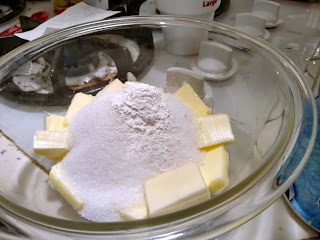 And now we get to the hardest ingredient to cut in half: the egg. If you really want to, you could crack the egg into a measuring cup, beat it uniform, and then measure out exactly half. But that means you are wasting half an egg. And while one can just pour the unused half-egg into a hot frying pan for a quick snack, we'd rather have twice the cookies. 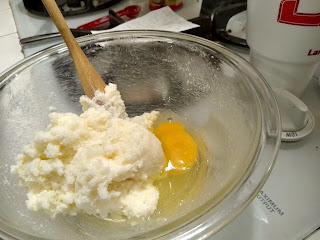 At this point, we thought of Her Disapproving Highness, Fanny Cradock. She would have told us to think of someone we really don't like (but we're too well-bred to say anything) then take it out on the bowl. We could use a handmixer if we wanted. But while in isolation, this is my well-whipped idea of a good time. 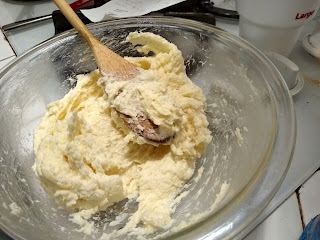 And so, with the first ingredients excessively well-beaten together, we reached The Great Bifurcation! I should have actually measured out the halves, or maybe put the bowl on a kitchen scale and ensured that we had a perfectly even divide. Instead I just eyeballed it. I will also note that this sort of multi-bowl experimentation is only possible because we now share a kitchen with a dishwasher. 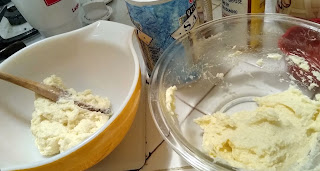 And now we get to our first star ingredient: the coffee! Most of the coffee-flavored recipes will have you use instant coffee (or to make a cup of it and pour it in). Using actual coffee, we are warned, will fill your creation with gritty coffee grounds and ruin it. But the instant coffee in this house is rancid and only kept for emergency caffeination purposes. I'd thought I'd stir in some of the normal coffee, but when I scooped it out it looked like a spoonful of woodchips. 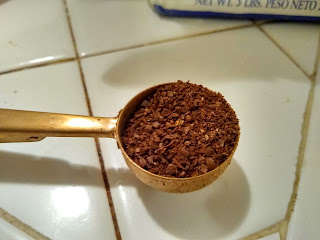 Fortunately, this house has a coffee grinder. It last saw use when I was grinding granulated sugar into caster sugar for the most recent Pieathlon. As far as I know, this is the first time anyone's actually put coffee in it. 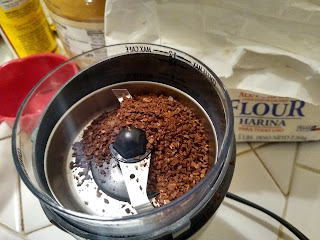 Coffee gets unexpectedly sticky when you grind it. I had to keep breaking up clumps that stuck to the sides and avoided the blades. But eventually, we had reduced the coffee from mulch to brown powder. I don't know if it's ground finely enough to prevent grittiness, but the grinder had done the best it could. At this point, it wasn't grinding anymore, just kicking the powder up and throwing it around. 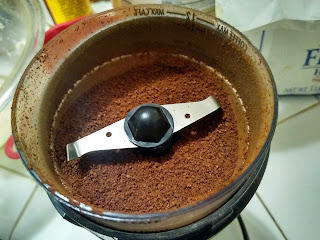 I was a bit worried at the sight of this mound of coffee powder that looked almost as big as the cookie dough we were stirring it into. Had we overdone it? Would these cookies be horribly bitter? I could have just carefully spooned some out before stirring, but then I risked having unacceptably insufficient coffee flavor. 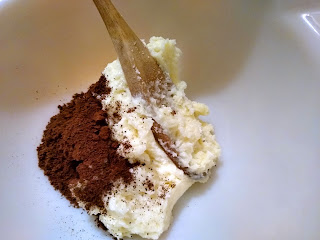 Before I could spend half the night considering acceptable quantities of coffee for cookies, I went ahead and stirred everything together. It turns out that one scoop of coffee is perfect for this amount of cookie dough. It tasted like one of those magical iced creations from a coffee shop that comes out of a blender and has a blob of whipped cream and a shake of cinnamon on top. 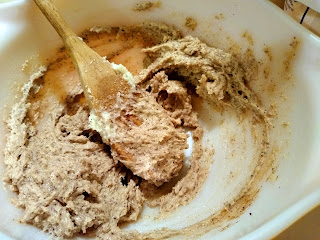 The last time I did this kind of assembly-line cooking, it was Thanksgiving and I was making three pies, two cakes, and multiple cookie recipes (it was my idea of a good time). Anyway, it is now time to put flour into these delicious cookies. 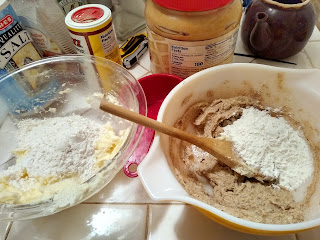 And now, we get to the other title ingredient: pumpkin spice chips! You may notice that I made a fatal error with the coffee-free bowl. I forgot to actually mix in the flour before adding the chips. This caused me a brief panic because I've always been warned that dreadful failure will always ensue if you don't actually mix your flour in before adding the chips. But I figured that we already had committed the ingredients. We couldn't put the butter or the egg back in the refrigerator, nor could we separate out the sugar and return it to the bag. So we just stirred everything together and hoped that we would have success anyway. 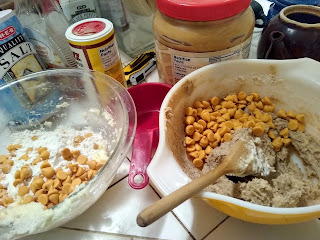 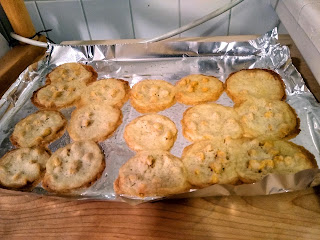 You know how when we made this recipe according to the actual directions, the dough was so runny that it barely held itself into cookie shapes? Well it was even runnier without the cocoa powder in there. If it wasn't the middle of the night, you could have seen daylight through them. 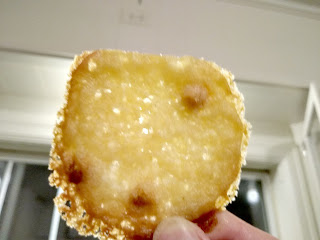 Well, let's put that pan of baked splatters aside and get to the real reason we're here today. We hoped that the coffee would make them a bit less runny than the vanilla ones, even if we could feel no difference while scooping it out. 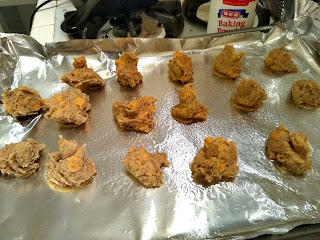 Tragically, our featured cookies became what I had feared I'd get the whole time: one big melted-together megacookie. I could have saved a lot of time by just pressing the dough out into a square pan. 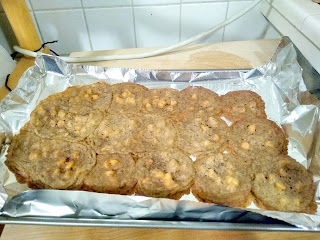 Figuring that the cookies may be thin but they are nevertheless edible, we cut them apart. It looks kind of like the underside of a turtle, doesn't it? 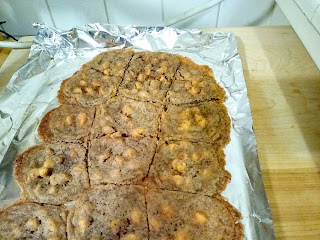 The resulting cookies tasted fantastic. Coffee and pumpkin spice go together like chocolate and peanut butter. We could not stop eating these. We had made the vanilla cookies in case the coffee cookies brought disappointment, but they were just so good that ate them all long before polishing off the vanilla ones (though all the cookies got eaten in haste).

However, removing the cocoa powder from the recipe made these cookies too runny and too buttery. You might think that would make them extra decadent, but in reality it made them greasy. We might try these again, cutting back on the butter a little bit and adding a little more flour so they bake into cookies instead of puddles.

You might be thinking "There are a lot of cookie recipes that would come out exactly like you want! Why not just make one of those and add the coffee and chips to it?" I have three reasons for that. First, I have a lot more quarantine free time than I intended. Second, I try to tell myself I am good at baking (even if my results remain irregular). As someone who self-allegedly is good at baking, surely I can figure out how this recipe works and then alter it to do as I wish. Third, others in the house are enabling my cookie battiness. I suggested cracking open a cookbook and getting out another recipe. Someone else said. "No, no! This is a challenge." 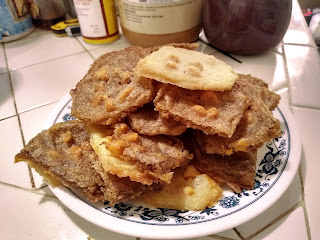 And so, more (hopefully) lovely cookies will be forthcoming! With that said, these weren't bad aside from being far too thin. If you cut back on the butter by a spoon or two and press them into a pan to make bars, you would be delighted.