Today, we at A Book of Cookrye welcome one of the best seasonal flavors into our kitchen: the marvelous taste of discounts! 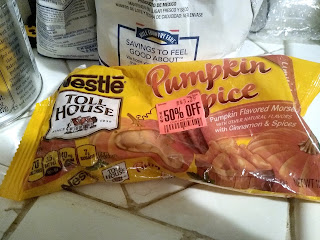 Here at A Book of Cookrye, it is always pumpkin spice season if you truly believe. We've been wanting to make the cookie recipe on the back of the Reese's chips bag, but we lost the clipping. Fortunately, the Internet is at hand. I didn't have to go to the grocery store, photograph the back of a package, and put it back on the shelf like the nickel-scrimping person I never meant to be.

One of my friends always puts chocolate chips in her pumpkin spice bread. Theoretically, reversing the combination will be a smashing success. We're cutting this recipe in half, hence some of the odd amounts. The recipe uses one stick plus one little nub of butter. I didn't want to cut up part of a butter stick for this, so we're sneaking some of the margarine into this instead. Since these cookies will be the color of chocolate, we figured the brown would hide the toast crumbs in the margarine. 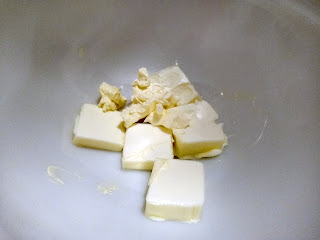 One thing one notices when actually trying recipes less than 40 years old: there's a lot more sugar in things now. Yes, chocolate is bitter and needs a bit of extra sweetness to compensate, but we have a diabetes case brewing in this mixing bowl and we haven't even stirred in the pumpkin spice chips yet. 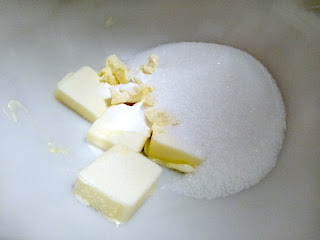 To the recipe's credit, they put a lot of chocolate with all that sugar. I suppose I shouldn't be that aghast at how many of those sweet white crystals we're putting in this recipe. If we'd started with the equivalent amount of semisweet chocolate, we would have added less sugar but there'd be a lot of it already in the chocolate. 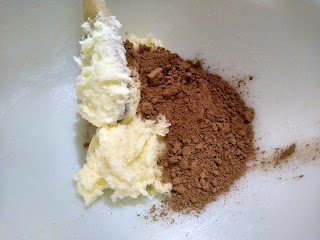 As hoped, the chocolate turned this batter not just brown but nearly black. It made me think of those brownies from a Canadian chocolate chip bag that turned out so darkly divine. 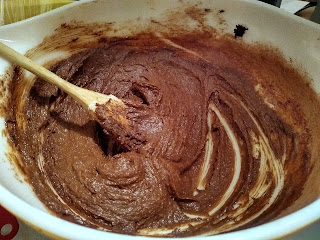 A lot of people have asked me why I always make older recipes-- or at least, they used to back when we could all still go visiting. I automatically answer that I don't always make older recipes, I just like to make recipes from a lot of time periods instead of arbitrarily restricting myself to the last four years. But on the (rarer than I thought) occasions when I do make a recipe from today, I almost always have a moment when I look at the food-in-progress and thing "Gorsh I'm not used to it looking like this!" Just like men's suits all look identical until you see them in a lineup, foods change in little subtle ways through the decades. Today, I added the flour to the recipe and thought "These cookies will be awfully runny." 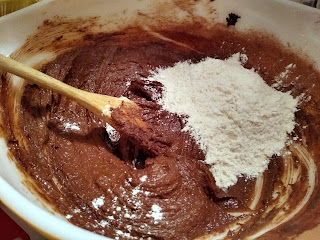 I have never made a cookie recipe that put so little flour into so much batter. Almost every cookie recipe I've ever made gets a lot firmer after we add the flour to it, but this just looked like our "cookies" would melt into a pan-sized puddle of cookie dough. 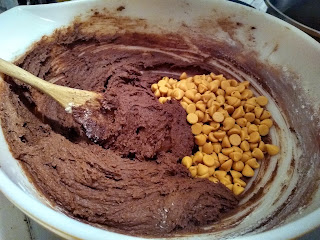 As we discovered when we made Hillary Clinton's multiple-bakeoff-winning cookies, making them by the teaspoon produces unsatisfyingly tiny cookies. I've never actually used the half-tablespoon (that's 1½ teaspoons) to measure anything for cooking, but I do like the cookie size you get when you use it. But as already mentioned, this cookie dough was barely firm enough to hold its shape. I chose the pan with four raised sides because I was almost certain these would melt into a single mega-cookie and then drip off the pan without a barrier. 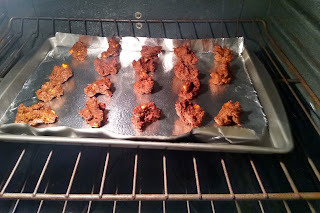 Unusually for a promotional recipe, the Hershey's people chose to show a photograph of the cookies still in the oven rather than when they're actually baked. I was just astonished that mine looked so much like theirs. We all know that food photographs are very staged with many behind-the-scenes tricks to make the food in question uncannily perfect. Therefore, I did not expect to peep into the oven and see that mine looked almost exactly like theirs. 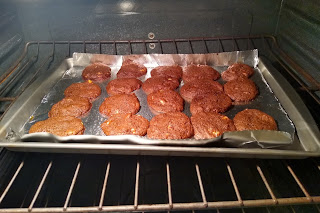 These cookies darken a lot upon removal from the oven. Also, in these quarantine times, you should know that this recipe makes a lot of cookies. This is how many cookies we got from a single pan. Keep in mind that this recipe filled two cookie sheets after halving it, so this is only half of the cookies we made this evening. 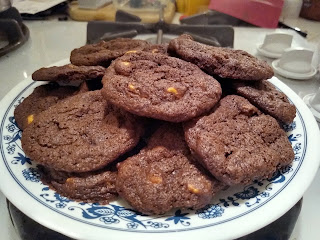 In these times when one can't go out visiting, that's a lot of cookies unless you have like seven other people in the house. If you were to make the original recipe amounts instead of halving them, you'd get this many cookies. 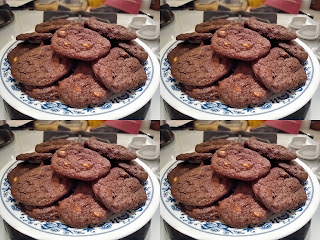 When you make this many cookies, they had better be good. But as much as I wanted to like it, the pumpkin spice almost-but-not-quite went well with the chocolate. Perhaps the unapologetically synthetic taste of the pumpkin spice chips was a bad match for actual cocoa. They might have harmonized better with the chocolate had the latter also tasted unnecessarily artificial.

However, the cookies themselves are really good. They're like rich chocolate brownies that just happen to be cookie-shaped. I'm not surprised at the success- generally speaking, corporate recipes go through strict and repeated testing before they publish them. If you use peanut butter chips like the original recipe said, or if you used chocolate chips (whether brown or white), you would no doubt love them. Honestly, you could leave the chips out and have some really good chocolate cookies.