Banana Bars are very much a cake

We keep making the mistake of purchasing large quantities of bananas and thus having them all droop at once and threaten to turn into brown ooze in their peels. You might think we should freeze them-- we have. Little tubs with bananas smushed into them are slowly edging the rest of the food out of the freezer. This bounty of overripening bananas made us wonder- what other lovely things can we do with them? Banana bread is lovely, but there are many other banana recipes just waiting for us to give them a go. 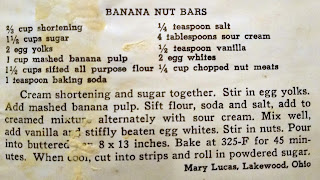 We can rest assured that at least one of the recipes on these pages is a good one because of the multiple spatters across the paper. One splat looks like egg whites, and I think we also have flour embedded in there. Ingredient residue in used cookbooks is a reliable way to find the good recipes, so we're starting off with good omens. 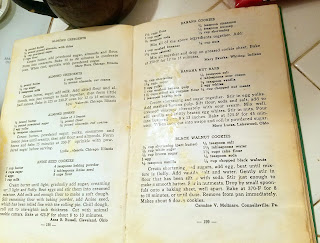 Mary Lucas has our best baking interests at heart. Rather than spend a long time pulling batches of cookies in and out of the oven, we're just putting all of the dough into a single pan and announcing that the cookies are bars. Most cookie recipes I make turn into bars unless I am in a crafty mood. 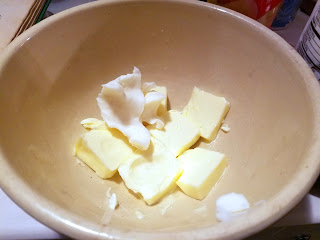 And yes, one of our many sacrifices in this pandemic is that we ran out of butter and had to put in a bit of shortening to make up for it. In other tragic inconveniences, we've also had to endure the grocery store only having bleached flour in stock. Not that I'm getting all conspiracy-enthusiast about Clorox in bleached flour, but it always seems to be just a bit clumpier and harder to mix than the unbleached kind. (Though I've never blind-tested this, so I could be just imagining it all.) We also had to make one teeny alteration since we lack sour cream: we did that old trick where you let milk and a splash of vinegar sit for a bit and curdle. 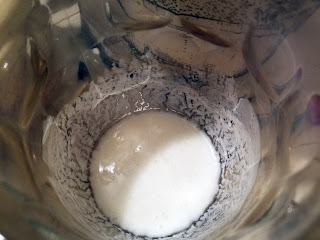 The vinegar-in-milk method makes a decent counterfeit buttermilk when you either run short of it, or if you're like us and never use buttermilk fast enough to justify purchasing a carton of it. And buttermilk is a decent-ish substitute for sour cream if you are in a pinch-- or if you're trying to minimize your excursions to the grocery store just because you ran out of something mid-recipe. This is also the first time anyone used that artistic bottle of cider vinegar that still has that sludge at the bottom of it.

But while flour may be sporadic in supply and we weren't going to nip into the store for a quick pint of sour cream, our area has somehow has absolutely no shortage of sugar.

As we have previously mentioned, we have taken to blenderizing our bananas where we used to simply mash them. This is partially in response to people who are like "eeew I don't like all those lumpy things in banana bread" and partially because a blender is almost as entertaining as a waffle iron. Since we added the egg yolk to the bananas so the blender had just a smidge of extra liquid to help things along, we couldn't follow the recipe instructions to add the egg yolk here. We put in an yolk-sized splash of blenderized banana instead.

When the recipe called these bars, I thought they'd be dense. I imagined something like what you get when you decide to smoosh cookie dough into a 9x13 pan. However, our bars-to-be were looking a lot like cake batter. The bananas didn't commingle with everything in the bowl, they flooded it. 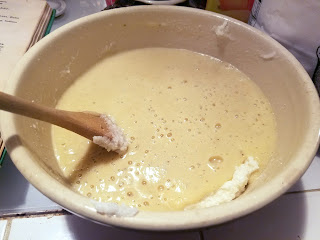 Most banana recipes have you stir them in at the end, but Mary Lucas of Lakewood, Ohio has us dumping them in much earlier. It turned everything into a mess of butter curds in banana goop. Seeing your batter look like cottage cheese is often an bad sign, but the cookies from Maxine Menster's grave also curdled as we mixed and turned out fine. So, we told ourselves, perhaps this is not a guarantee that failure lies ahead- even if the contents of our bowl had every appearance of it. 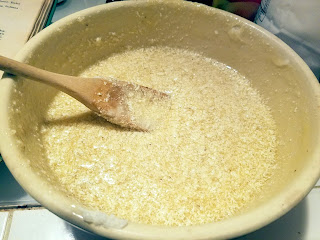 Like many people, I generally cut a weird-looking recipe in half if not down to a quarter. This one, however, looked so reassuringly straightforward that I thought halving or quartering unnecessary. "It looks like banana bread but a little different," I told myself. It was so different that the big scoop of flour looked hopelessly overwhelmed atop everything. 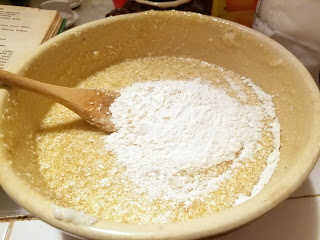 Our imitation buttermilk (as you remember, we're using a substitute for buttermilk which is a stand-in for the sour cream the recipe wishes we had) looked hopelessly lost in the vat. I really don't know where we got so much batter from. The recipe doesn't call for things like seven eggs, a pound and a half of butter, or four cups of sugar. Reading the amounts, I'd thought it would just barely fill a rectangle pan. 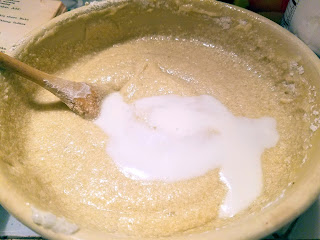 Well, we had everything in the batter mixed, aside from the last finishing touch: 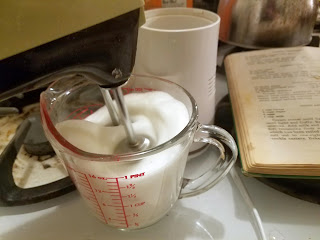 I no longer get annoyed at recipes that call for beaten egg whites now that I can put the extra bowl and beaters in the dishwasher. This extra step of beating whites to carefully fold in, however, is very typical of this cookbook. Its pages have a lot of recipes for still-popular things like banana bread or peanut butter cookies but they are not yet codified as they would become only a few years later. In this book, we haven't yet decided if peanut butter cookies are the kind you drop from a spoon, the kind you roll into balls, or whether you also add orange to them. Similarly, there are many recipes in this book for banana bread-- and they are all called banana cake. Or, in today's instance, banana bars. I don't think we're getting bar cookies out of this. It looks like cake batter. 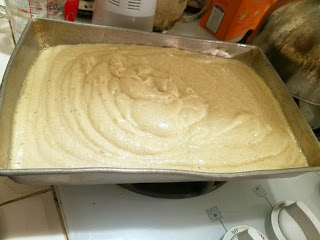 Sure enough, it rose and baked into a cake. I realize that it's hard if not impossible to draw a definite line between bar cookies and sheet cake, just like it's hard to pinpoint an exact point where you're making chocolate cake instead of brownies. Nevertheless, this is definitely a cake. 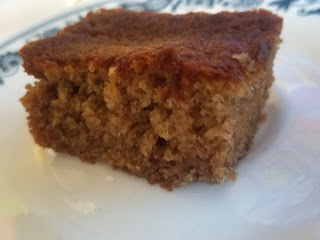 Nevertheless, we tried to follow Mary Lucas' instruction to roll these in powdered sugar. It fell right off. The powdered sugar that we sprinkled on top was a nice touch though. 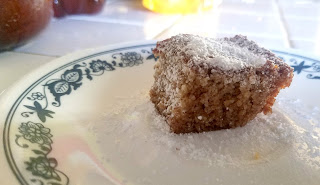 While I was excited about banana bar cookies and disappointed not to get them, this is some damn good banana bread. It made the kitchen smell like banana bread two days later. It's wonderfully light and delicate, and the banana flavor is marvelously strong. This may be our new banana bread recipe.