Ever had a craving and a lot of free time?

You might think I'm about to deliver a poetic dissertation about how wonderful and fun it is to make bread, but I've had too many failed dough wads and doorstops of late to chirp about the joys of baking for yourself. With that said, we at A Book of Cookrye purchased a bag of whole-wheat flour that was extremely coarsely ground. It added a faint grittiness to many a baked creation. However, we thought that perhaps it made the flour perfect for pita bread. I should note that I've never made pita bread before.

The shelf life of yeast packets continues to astonish me. Do you remember when we made bread using yeast that expired seventeen years before? This is (I think) the last of those packets to turn up in the pantry. Despite its old age, it fizzed and farted with vigor and vitality. 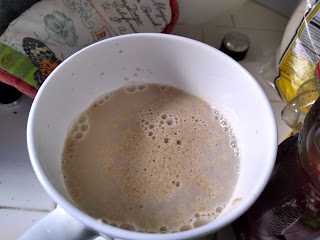 And so, having established that our yeast was still alive, we happily dumped it into our bowl of lightly salted flour. This gave us a sticky mess. I gave the "dough" a handful of extra flour because it was runny enough to pour, and it made no difference. This brings us to the problem we always have when making something new: we don't know what it's supposed to look like. Is pita dough meant to be thin and runny? Did we mis-measure something? Did they put a lousy recipe on the flour bag? 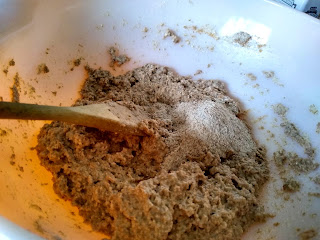 Well, we stirred the wheat goop in until it got a bit toughened. At this point we could sort of knead it,  though that did not go very well. Mostly it oozed between our hands. I did not mind kneading this formless drippy mass; it was actually amusing to squish it between my hands. Miss Leslie, in Directions for Cookery in its Various Branches, said that "The goodness of bread depends much on the kneading." We kept those wise words in mind as we continued trying to make this batter act like dough. Eventually (and I do mean eventually) the dough toughened up until it could actually hold a shape. 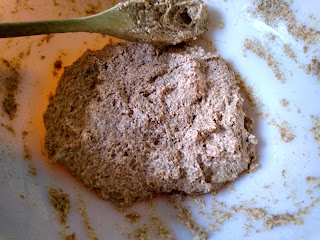 None of the many bread video tutorials in existence- whether they're done by perky people with aggressively cheerful smiles, authoritative experts who often bring out a whiteboard, or meditative people with soothing voices- ever mention how annoying it is to get bread dough off your hands. That dough sticks to you like chewing gum, and only comes off when you scour and scrub your skin like the kitchen floor. It makes me wonder if any professional bakers consider hand and forearm waxing to be a business expense.

But once we had kneaded the dough and cleaned our hands, we were ready to set this to rise. It's true that bread often takes half a day, but so much of that time is spent rising. You don't need to hang around the kitchen for that, or even stay in the house. You can even (as a random example) walk all the way to the mechanic to get your car back, and your bread will be fine in your absence. Assuming your yeast is alive, you will find that your dough ball has become a lovely pouf. 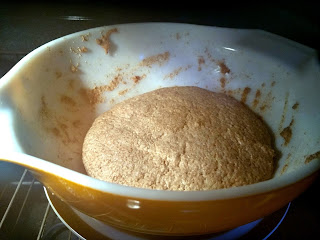 And now, we get to the part where we shape this dough into actual pitas-to-be! It slackened a lot while it was rising, and resembled what happens if you tried to make your own Silly Putty and it came out a bit too runny. 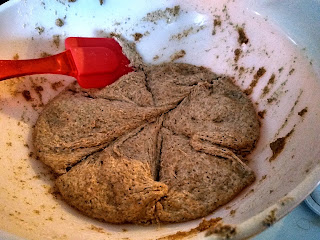 We have, as directed, divided the dough into six portions. I would like to note a shift in bread recipes that has occurred since everyone started just buying bread instead of making it themselves. Bread recipes don't yield nearly as much as they used to.

Bread takes a lot of time to make- especially before we had baking powder (and doubly so before you could just buy yeast and stir it in). You can't just decide to whip up some bread 20 minutes before dinnertime. As a result, bread recipes used to make a lot of bread. A lot of older ones measure flour not by the cup but by the gallon (or by the peck). Just like any recipe for anything never takes twice as long if you double it, a sensible lady* would make five or six breadloaves instead of one. You would never spend an afternoon making a bread recipe if you only got six puny patties. 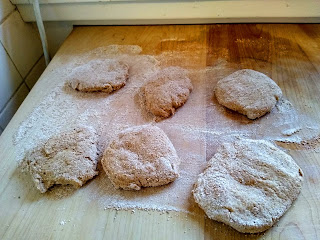 We are then directed to cover these with plastic wrap, which I think shows that the recipe writers did not think people would make these at home. Most of us, when attempting the "simple" operation of laying a sheet of plastic wrap over a countertop, will end up with a crumpled wad of plastic clinging to itself. In cooking class, after seeing so many of us fail at using it, the teacher muttered to herself "One of these days I oughta do a class in plastic wrap..." This led to most of the class (myself included) saying we'd love that actually, followed by the teacher detouring from the scheduled lesson by popular demand. If you can't use plastic wrap, we at A Book of Cookrye offer a much easier alternative: 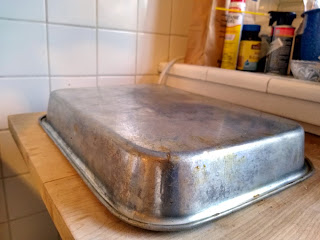 At this point, we come back to our earlier discussion about how no one making bread because they have to would have gone through all this botheration for just six bread-pats. They have us heating the oven to 475° (that's gas mark 9, or about 250° for our centigrade friends) for this half-dozen bread-pats. We didn't mind this extragance of electricity or heating up the kitchen because it's it's cold outside. With that said, I have serious objection to firing up the oven until it threatens to incinerate the fallen pizza toppings (that we keep forgetting to clean) for only six pitas. It's like heating your big oven that can hold an extra-large turkey, only to bake a single mini-muffin in it.

Also, the recipe writers seem to be under the impression that we own a baking stone. Dearest friends, it was a big day when I finally gained access to a dishwasher that isn't just me with a sponge. I put the pan in the oven before I turned it on, because it seems that laying your bread on a sizzling surface is part of the process. A few minutes later, a FWOP sound came from the oven. Have you ever had a baking sheet spontaneously warp? 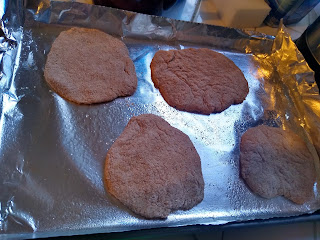 We did indeed get baked bread out of this and not hard flour-clay. Furthermore, it was really good bread. It was lovely, light, soft, fluffy, delicious, and everything you ever wanted your bread to be. It's kind of insulting that the one time I wanted bread to be hollow in the middle, it came out like the best (albeit flattest) bread I've made in a long time. 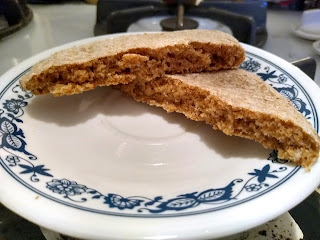 This canceled our plans to make pitas out of our leftover turkey. You can try to pile it on top and pretend it's an open sandwich, but it just falls off. 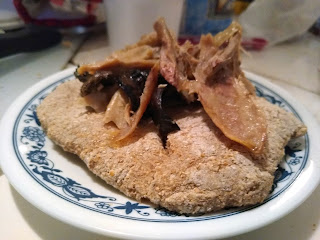 Someone else in the house, however, realized another delicious way to serve the flatbread: 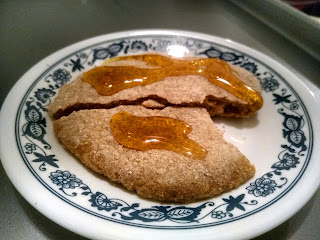 We all agreed that this "pita" bread was so good we need to make it again. However, pita or not, you really need to double this recipe. This bread was so good a lot of it got eaten right out of the oven, before I could document it for posterity. But with the magic of image editing, I want to show you the puny yield of bread you'll get after you spent all that time making it:

So yeah, if you try this recipe at home, I suggest you double it. Six single-serving bread pieces is not enough to justify turning your oven into a blast furnace.