Have you ever bought the wrong applesauce? I never have because I don't eat the stuff, but someone else in the house accidentally bought applesauce of UNsweetened variety. The grocery store stocks the two types of applesauce right next to each other, with insidiously similar labels. (That is how I once accidentally purchased purchased decaffeinated tea.) Anyway, we couldn't let it get into the trash can. There's a pandemic on, grocery prices are rising, and (obviously) we'd be throwing months of agricultural labor into the trash. Why would we so senselessly waste food (even food we don't like) when we could have dessert? 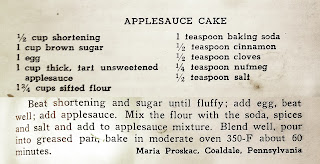 In the Before Times, we would think nothing of going to the grocery store whenever we wanted. Sometimes when going through periods of culinary creativity, we would flip through cookbooks with no previous idea of what we would cook that evening. We would then go to the grocery store to get the missing ingredients for whatever we'd decided to create. These days, we (like everyone) are minimizing our time in the grocery store. Therefore, we purchase a lot of things at once, and stay away from the store as long as possible. This often leads to mass expirations in the house that never occurred before. Therefore, a lot of our culinary creations are based on what in the refrigerator is nearest to death. 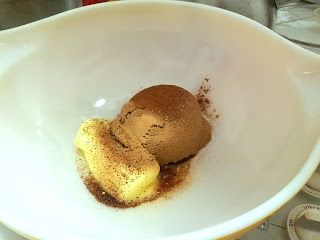 With that said, I've noticed that a lot of our waste-prevention involves putting food on top of potatoes or turning food into cake. We have made cakes out of old blueberries, squishy strawberries, brown-under-the-skin apples, blackened bananas, questionable sour cream, mushy grapes, and a few peaches that slipped past their prime on the countertop. Today's object of cake is not near expiration, but no one was going to eat it because it is tragically unsweetened. There is no point in waiting for the applesauce to nearly expire, so we're going to put it in a cake now and reclaim a bit of refrigerator space.

We have made a few applesauce cakes before. They always come out nice, but not particularly apple-y. The applesauce does change the texture, though. They tend to rise a bit lighter. They're also not as rich or buttery, which makes room to add other things to them without making them too overwhelming. They make very good as spice cakes, but we're trying this one without adding any. You see, I keep hoping that sometime I'll make an applesauce cake that really tastes like apples, so this cake shall be baked unspiced to find out if it's the recipe I've long sought. 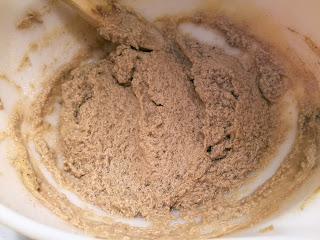 Every applesauce cake I've made takes on that unnerving curdled appearance when we actually add the applesauce. The sauce never actually mixes in, it just sort of intersperses itself amongst the butter and sugar. I suppose it makes sense given that the apples aren't liquefied so much as reduced to tiny little apple granules, but it's always unnerving. Fortunately, the flour always seems to turn our curds and whey into a cake batter. 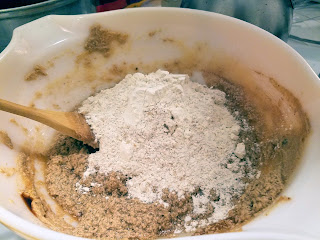 You may have noticed the flour looks a bit brown. That's because we're slipping a bit of whole-wheat flour into this cake. This is not one of those sneaky "they'll never know it's actually health food" cooking adventures where people sneak broccoli into the raspberry tarts. Adding a smidge of whole-wheat flour adds a nutty flavor without actually adding nuts. I think it's a very nice addition to anything that one might serve as a coffee cake. 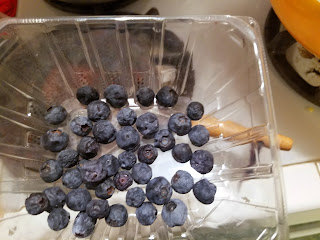 You know how we said we were avoiding food waste by making cake? Today's recipe is doing double waste-prevention duty by also making use of these blueberries that were drying out in the refrigerator. We at A Book of Cookrye always believe in starving the garbage can, and these sad-looking (though still perfectly edible) blueberries were not going to the city dump. 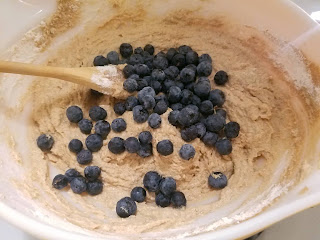 As we saw earlier, this batter had the consistency of extra-runny cottage cheese. I'd thought it would be one of those thin batters that you just dump in the pan and it levels itself out. But as you can see, after adding the flour this cake batter could stand by itself in the pan. 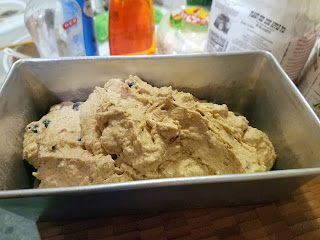 You may be wondering why we were holding a few blueberries off to the side to sprinkle on top after our cake was otherwise ready to bake. It's how we make sure that the cake has berries throughout regardless of what happens in the oven. Even if most of the stirred-in berries sink though the cake while baking, the ones on top can't possibly make it all the way to the bottom of the pan before the cake has baked enough to keep them in place. 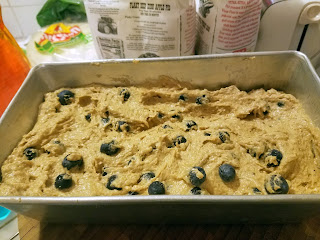 And here we see the finished cake. Where we once had unwanted applesauce and mushy fruit, we now have a lovely dessert that contains enough healthy ingredients that you can pretend it's good for you. It would have been nice to see this rise to the top of the pan, but it looks lovely all the same. 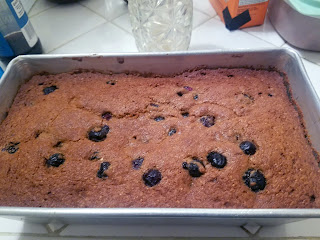 This is a very good cake. The texture is such that if you poured the batter into cupcake tins, you could either call them cupcakes or muffins. It's not clearly one or the other. To my delight, it has enough apple flavor that you can actually tell it contains apples. It keeps well for a few days, making it perfect for leaving out on the counter for whoever wants a bit of cake. And in these trying times, knowing that there's cake in the kitchen is very reassuring. 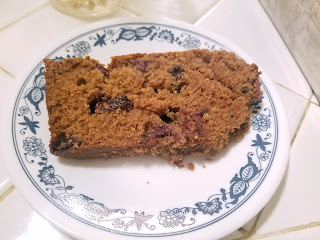