Here on A Book of Cookrye, we continue our ongoing campaign to avoid waste! Today we are depriving the trash can of.... this! 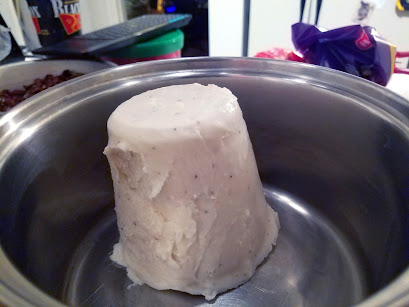 Yes, in a moment of extravagance, we all got in the car and made a pilgrimage to the nearest establishment that would sell us fried chicken without making us exit the vehicle. Around here, you get gravy with your fried chicken whether you wanted it or not. No one in this house likes gravy. In the past, we have discarded the gravy like so many unwanted sauce packets, but groceries are expensive nowadays. But what does one do with a pint of gravy when no one likes gravy? We add cheese, of course! One of the greatest things about American cooking is how good we are at putting cheese in absolutely everything.

You can make your own white sauce, but if you happened to get fried chicken at a drive-thru, the probably sent you home with a pint of it. So you can skip this business of beating out flour lumps, and get right to the part where you add a lot of cheese. 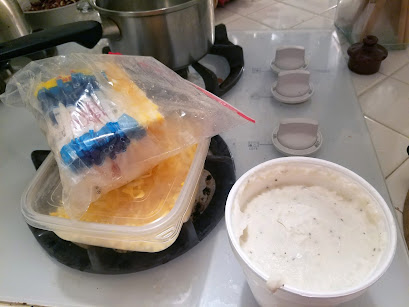 It doesn't really matter how much cheese you put in here. Measure with your heart. In this case, we're using the rest of a block of cheese that has been refrigerating for long enough that it was nearing expiration.

The white stuff we're stirring cheese into goes by multiple names- bechamel if you're feeling fancy, gravy if you're not, or white sauce if you took home economics. I prefer calling it white sauce because, well, that's all it is. It looks like white, it tastes like white and in general is like someone made potato-free mashed potatoes. However, if you add enough cheese, it tastes like cheese. 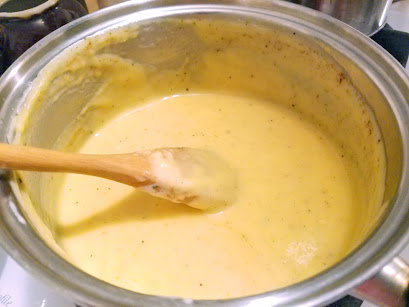 We'll admit that we rarely go through the bother of making a sauce for this. We instead just sprinkle shredded cheese right into the pan in layers. But a lot of people find that objectionable. In the same way a lot of my friends see raisins in cookies and cry out OH GOD NO NO NO NO NO, a lot of people will be fundamentally frightened if they find that the cheese is not made into a sauce. Putting undiluted cheese into baked things like this will get reactions like "Oh eeeeeeeewwww it's stringing!"
But we should also note that if you're trying to get a whole pan of cheesy spuds and you've only got little extra scrapings and dabs of cheese at the bottom of various bags in the refrigerator, this will stretch it into a big pot of cheesy goodness just like adding milk and rice can triple your ground beef when making meatballs. 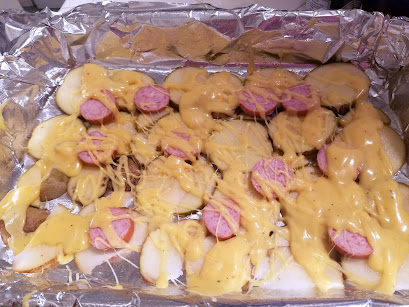 Whether you're making cheese sauce or just sprinkling shredded cheese between each layer, be more parsimonious with the cheese in the bottom layers and more liberal with it as you get to the top layers. It tends to sink down as it bakes. As you can see, we've sort of barely sprinkled it on this first layer, but really gobbed it on the top. 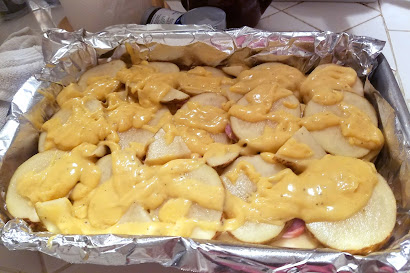 And then, we complete this with a crown of cheese! Yes, it's got gobs of cheese in it already, but that cheese is mixed into sauce. Unadulturated cheese will get so nice and crispy on top while the cheese below turns into a delicious bubbling ooze. 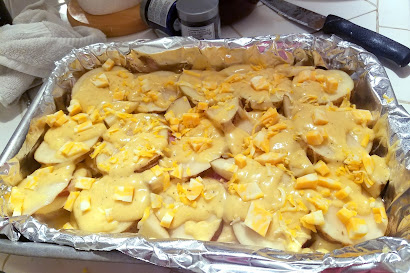 Potatoes take a long time to bake, so by the time they are done, the cheese on top has become a marvelous layer of crispiness that spans the pan from edge to edge. 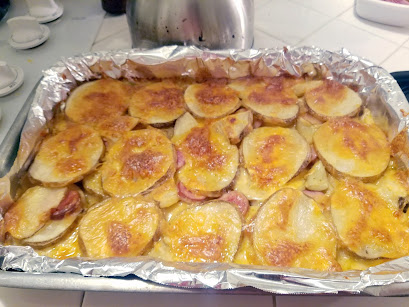 You will find that if you used an egg in the cheese sauce, it sets just enough that you can lift it neatly out of the pan. 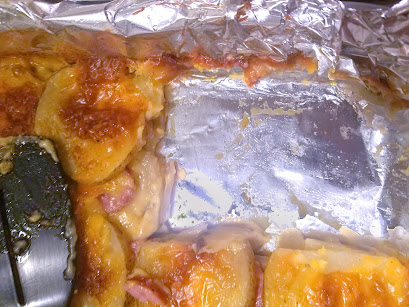 Cheesy spuds may take a while to make, but most of that time is spent in the oven. Because of this, they're a good choice when you don't have a lot of time to cook, but not when you need to make something at the last minute. You can get this put together very quickly, pop it in the oven, and then forget about it until you decide to stick a fork in it to see if it's done.
You don't even need to hover over it as it get closer and closer to fully-cooked. Potatoes are very forgiving of spending an extra minute or ten in the oven, especially with all this cheesy goodness preventing them from drying out so easily. 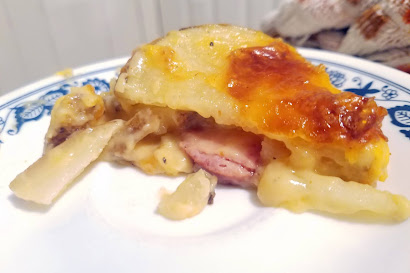