If you're in lovely Ottawa, you'd look outside and think that it's the perfect weather for a barbecue. 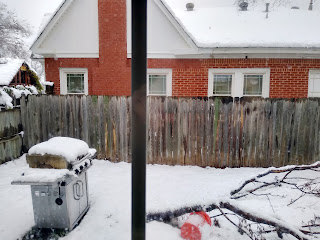 We at A Book of Cookrye have been indulging in two of our favorite winter hobbies: driving with car heater turned up high enough to wear short sleeves and sandals in spite of the freeze, and making tasty treats with snow. 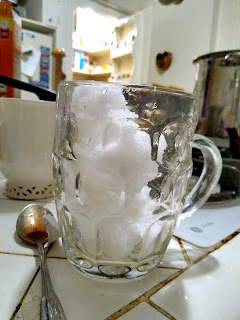 A few years ago, a new liquid sugary delight hit gas stations everywhere: frozen hot chocolate. A lot of us joked about how silly the name was, but it seems I'm nowhere near the only one who decided the stuff is actually really good. I used to agree with the snarks who were like "Don't you just mean chocolate milk?", but you have to admit that if you make hot chocolate from a packet and get it cold, it tastes different than if you made chocolate milk.

And so, we reach the magic moment! I'd figured I'd just make really concentrated hot chocolate syrup and pour it out like snow-cone syrup. However, I failed to realize that snow-cone syrup generally isn't boiling hot. Therefore it doesn't cut through the snow on contact. 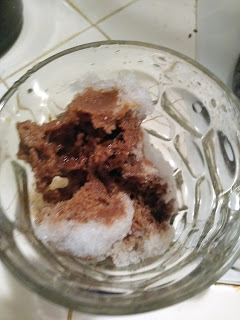 Our snow may have deflated to nearly nothing on contact with hot chocolate, but it's still really good. I think even the most refined people who have spent years making their tastes "grown up" have a few cheap things they like. You know, the sort of foods that are only guilty pleasures because you feel guilty that your tastes aren't "grown up" enough. Anyway, hot chocolate made from a mix (especially with those weird desiccated marshmallow globules) is one of mine. 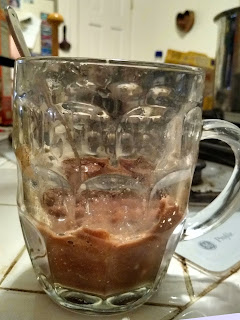 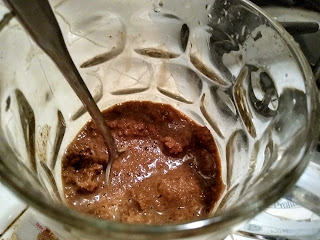