Hump-Day Quickie: Haluski: or, You never know when you'll like cabbage

I was going to write about how economizing and meal planning during this pandemic has given me a sharp sense of what in the refrigerator is about to expire at any time. In an attempt to minimize how often we are in public spaces, we now try to get our groceries in sporadic trips, purchasing in quantities that threaten the suspension of our household's 21-years-young vehicle. Nevertheless, I was going to say, we always make sure that everything gets cooked or frozen before it has a chance to decompose in the kitchen. However, I'm going to have to back off of claiming I now instinctively plan all our meals to prevent any kitchen biology projects. This turned up in the refrigerator the other day.

We thought that perhaps we could peel off the top few leaves and reveal a still-fresh cabbage underneath. However, the black mold had penetrated all the way to the core. When we sadly threw an entire uneaten cabbage into the trash outside, we (despite not really liking or disliking cabbage) started thinking about the many lovely ways we could have cooked it. We do like cabbage in a few places. Cabbage gives egg rolls that lovely crunchiness. Or, if rolling individual leaves of cabbage up like a filmy egg rolls seems tedious, we could have put the cabbage into any number of lovely Italian recipes (cabbage pervades Italian cookbooks more than I expected). Or, we could have saluted the cuisine of our dear friends across the Atlantic and made bubbles and squeak. Or, we could have tried something we saw in a comment thread a while ago: 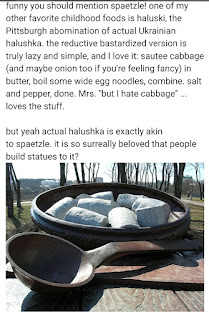 I tried to find a recipe for what this person called "actual halushka" but nothing turned up that resembles that pan of cylinders. But let's move on to what is apparently the Pittsburgh version. It seems easy enough, doesn't it?

Let's just pretend that I hadn't completely forgotten about an entire cabbage until it became so moldy that it emitted puffs of spores when I shook it. Just pretend that the cabbage below is the one that I happily remembered to cook before it decayed. 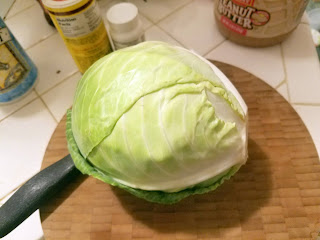 It always amazes me how dense cabbages are. It seems more like a solid vegetable than a ball of leaves. Also, it's been a while since I made anything involving cabbage. I forgot that they emit a stink as soon as you cut them open. 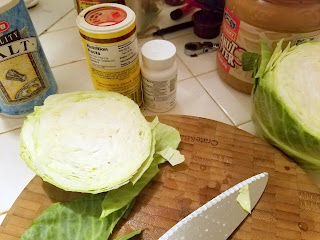 We learned two things from this: 1) my knife skills have gone kaput, and 2) even small cabbages will yield a lot of cabbage confetti. 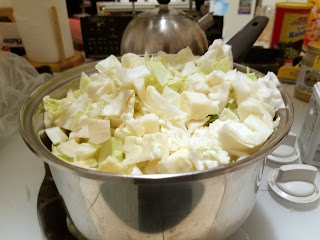 All right, we've fussed over the cabbage long enough. Time to get to that magical savior of almost every vegetable recipe. 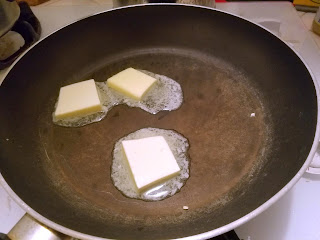 We tried to economize on butter. Knowing that an entire stick of butter lurked in the frying pan make this recipe a bit unnerving- despite knowing that we would get a lot of servings out of it. But when we added the cabbage, that half-stick proved insufficient to even coat it. Reasoning that we were cooking a lot of cabbage and therefore the butter would not make a concentrated grease-bomb (lest we forget the undrained stuffed onions), we added even more butter. That big hunk of cow fat looks small and lost among the cabbage, doesn't it? 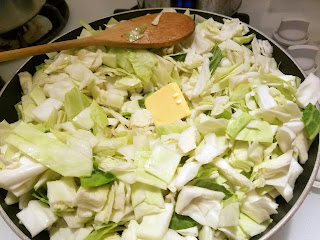 Also, cabbage smells like, well, cabbage. The smell worsens once it gets hot. Others in the house kept staring at the steaming pan of greens and announcing "It smells like cooked cabbage in here." I got very tired of hearing that over and over. But on the plus side, this recipe only requires two pots and one spoon. 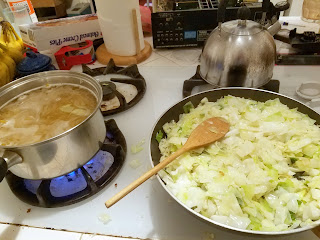 I really do appreciate the simplicity. There's only two main ingredients, and only two pans. And really, I didn't even need to constantly fuss over them. I only needed to occasionally stir the noodles to prevent them all sticking to each other in the water, periodically shift the cabbage around in the pan, and say "yes I know" every time someone informed me that the kitchen smelled like cooked cabbage. But you know what, the smell of cabbage will soon be cleverly concealed by all the lovely and delightful seasonings!

I know I could have added a lot of spices to this. The spice cabinet is full of shakers that were purchased for only one recipe and have rested there ever since. But whoever wrote that out listed only salt and pepper. I got the impression that this is something like grilled cheese: at its best when you don't try to fancy it up with multifaceted, multi-layered flavors.

And so, with surprisingly little effort, we reached that magic moment when we combine cabbage and noodles! Or, more realistically, when we realize that the frying pan no longer suffices. I would like to note that I intended to just make something quick and easy for a delightful snack between meals. Typically, that does not involve carefully transferring the entire cooked mess into the big pot that really only gets used on spaghetti night.

Well, here it is. This is what I decided I needed in my life. 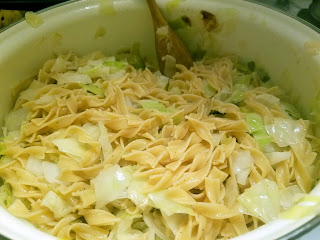 You can't cook cabbage without getting the attention of everyone who's not asleep. Curiosity was expressed about just how this massive pot of cabbage had turned out. Believe it or not, those who politely got a tiny bowl out of politeness and curiosity came back and got heaping seconds. True to the comment-thread post that made us want to make this, even those who didn't like cabbage liked it. Somehow, the combination of buttery cabbage noodles with enough black pepper to make it spicy just works. We only needed a small container to store away the leftovers from this massive vat of cabbage noodles. I'm surprised to say this, but I very strongly recommend this one. 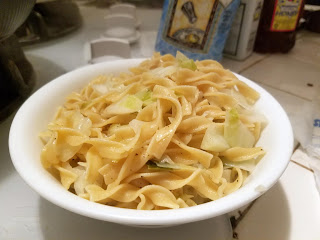 Now, as it happens, the grocery store near us has been trying to unload hams since before Thanksgiving. I'm still waiting for the turkeys to go on clearance (maybe they won't give up hope on selling full-price birds until Boxing Day), but we grabbed as many hams as the freezer would permit. And so, even though it would normally be extravagant to do so, we delightedly discovered that ham, cabbage, and noodles is absolutely wonderful. 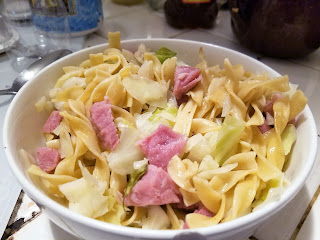