Sometimes at A Book of Cookrye, someone will send in a recipe that speaks to them of us. This one comes to us from Lace Maker in the comments under our post about banana cookies.  I love the thoughtful note of why this recipe seemed right for A Book of Cookrye:

I didn't find any interesting banana recipes in my cookbooks, but I did find waffle iron cookies which made me think about cooking banana bread/cake batter in a waffle iron. After all, summer is coming, and I know that you like adventures in cooking things in a waffle iron.

We do not have a lot of people in the house, so I hope no one minds if we cut this recipe down to one quarter.

This reminds me of one of my best accidental creations that I have only made once. When a dear cousin got her first apartment and had a housewarming, I got her a cast iron skillet (in case she ever accidentally dated a bastard) and filled it with cake-waffle-cookies for the housewarming party ("The cookies are for the party, the serving dish is your housewarming present!"). I made a batch of 1234 cake batter and dropped spoonfuls of it onto my waffle iron. After they cooled enough to not fall apart, I made the grave mistake of dipping them in glaze (just powdered sugar and water) and thus making a horrendous mess of half the kitchen while they drip-dried. The resulting cake-waffle-cookies (shortened to kwaffle cookies)  were unexpectedly addictive and people kept badgering me to make them again but not offering to clean up the inevitable kitchen disaster that comes from dipping all those waffle cookies in sticky glaze.

Back to today's recipe, I'm not sure if anything makes this recipe particularly waffle iron specific. Maybe Marti Platter tried to bake cookies on a sheet and they melted together into one big dough puddle, so she used the waffle iron to force them to stay as individual cookies. Maybe this was something that they did at home because waffle irons are entertaining for the whole family. Maybe one day there was a dire need for chocolate but the oven was broken. 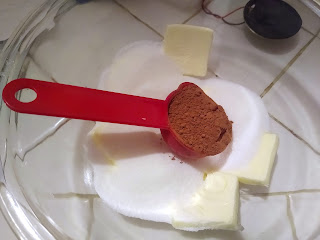 Some recipes seem to take forever to get mixed and put together, but this one went so fast that I almost wasn't ready to be finished. We're only a minute or two into this and we've already got most of the ingredients ready to go. 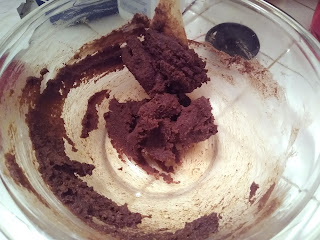 I like using a spoon instead of a mixer most of the time for the same reason some people love hand-sewing instead of using a sewing machine and some people go out of their way to get a stick-shift car. (That and I still have to remind myself that nowadays I can just drop the beaters from an electric mixer in the dishwasher instead of washing them by hand.) However, I double-checked the ingredients list and found no leavener in this whatsoever. So therefore, the only leavening comes from you, the home cook, and how hard you stir and whip. Therefore, we set aside the spoon and got out the power tools. 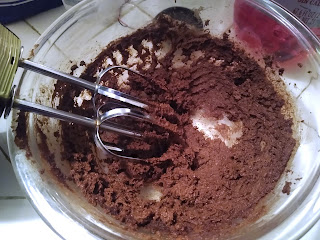 It's hard to tell since the chocolate gives this a tantalizingly dark color, but we've gotten the ingredients more aerated than we usually bother to. The recipe doesn't mention separating the eggs and beating the white to stiff peaks, which is why I didn't. Perhaps in earlier decades one would have assumed that you're supposed to whip the egg whites, but this is the late 1970s. At this point, even the most tersely-written recipe would have written "four eggs, separated." This one just says "beat in four eggs." 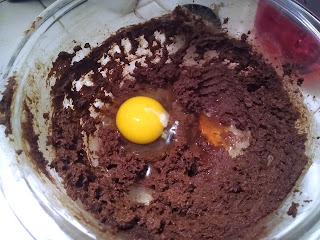 As aforementioned, there's no baking powder or any other leavening in this. Which means that we, the ones with the electric mixer, are the leavener in today's recipe. And so, when this recipe says "beat in four eggs," we decided to look to Fanny Cradock. As Her Not-So-Serene Highness would say, we thought of someone we really don't like but we're too well-bred to say anything, and we took it out on our cooking instead. We got this so whipped that it was several shades lighter. 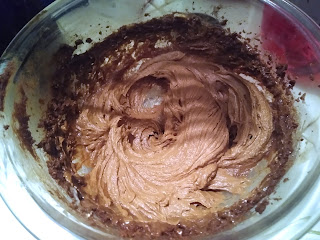 After scraping that ring of unbeaten mixture into our light and airy cookie dough and beating it a bit more, we got the flour into it and pronounced it iron-ready. 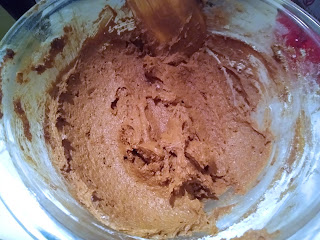 Now, there's a really awesome, vintage, excessively-large waffle iron in this house. You might think it'd be perfect for doing all these cookies at once. However, our every attempt to use it has ended like this:

However, this turned up in the cabinets. Note that the waffle grids are screwed on, meaning we can presumably take them out and wash them. This is a tragic shortcoming of that massive vintage one- you can't just shove the dirty parts of it under the faucet or soak them overnight without disassembling the whole appliance.

All right, it's time for the magic moment! The oven gets a rest today because we are doing these things with countertop appliances. 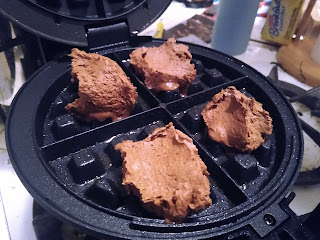 Those of you trying this at home should know that if your waffle iron has a ready light, you can't trust it for this recipe. Whatever sensors it uses were apparently designed with the assumption that you will be covering the entire waffle iron with batter. Since you've only put a few scattered spoonfuls of dough on the iron, the ready light will probably turn on while you still have a waffle iron full of hot goo. We gave these four minutes and got successful cookies out of it. 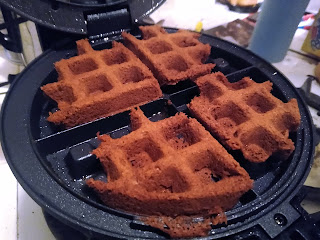 However, we had difficulty removing them at first. You know how you usually just carefully get a fork under your waffles and gently lift them out? These proved too crumbly and fragile. If you got a fork under them and tried to lift, the fork just tore right through them no matter how delicately you tried to move it. But I've been sporadically putting cookies onto a waffle iron for a long time now, and knew exactly how to get them off the iron intact: 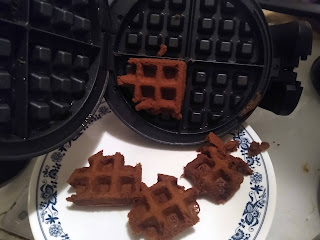 But after they were cooled, we had a plate that looked like this. 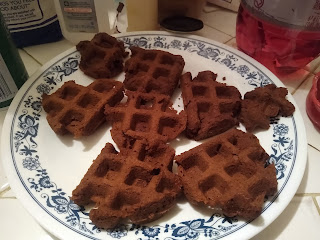 You might think that's a tiny recipe yield, but keep in mind that we did not halve this recipe but quarter it. Also, a lot of thecookies mysteriously disappeared while successive batches were baking.

The original recipe says to frost these. I did not know how the heck you are supposed to spread icing on a waffle. To keep things easy, I threw together some glaze for this (which was just our dear favorite cinnamon icing without the cinnamon and with about thrice the vanilla) and just poured it on. 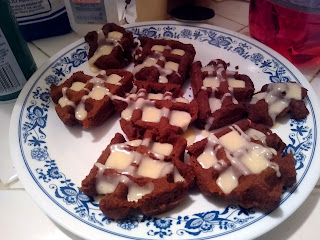 I then realized that we had a lot more glaze on these than I thought because we filled up all those holes. At first I thought this would prove a nasty sugar overload, but someone else passing through tried one and said "No. It's perfect." These cookies are amazing. They're like brownies that came off of a waffle iron. They have that delicate yet fudgy texture plus a marvelous crisp outer crust.

Purely to make sure we thoroughly tested the recipe, we made sure to set aside a few overnight to see if (as is written) they are better the second day. I think it says plenty that we had to deliberately set some aside. The cookies did get a bit firmer and less crumbly, but there was no drastic transformation. Even though the recipe says they're better the next day, you can safely eat them right after they're made.