When last we saw the nun brownies, we had made the brownies themselves twice but never tried the fudge frosting that came with the recipe. We at A Book of Cookrye were nevertheless curious about whether this boiled concoction would be any good. Furthermore, we wondered if it would actually improve the brownies. I've found that brownies, being very rich and sweet already, usually don't need any post-oven improvement. But this brownie recipe came with an icing recipe, so in theory they would perfectly complement each other. 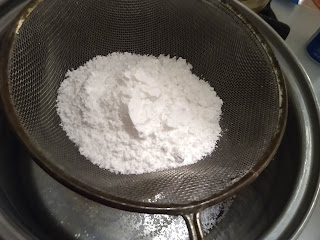 I usually don't bother sifting powdered sugar that is going to be boiled because any lumps always disappear in the bubbling heat, but I didn't want to argue with a convent's worth of nuns. 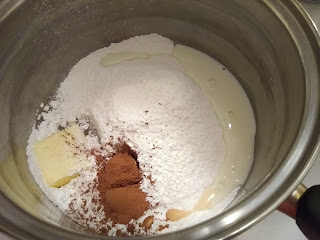 As an recipe note, we don't have cream in the house, and I wasn't about to get a carton just to use a single spoon of it. However, someone else in the house has taken to using half-and-half in coffee, which seemed close enough for today's endeavor. 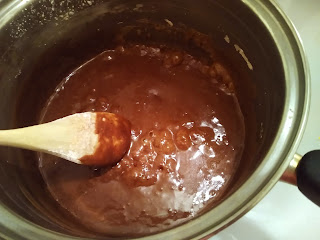 I don't think those nuns were kidding when they said to boil it only until it bubbles up around the edge of the pot. The overcooked fudge icing turned a bit crumbly when we tried to get it onto the brownies.

Also, this recipe makes exactly enough to cover this one small pan. It's like God meant for this icing to go with only this brownie recipe. 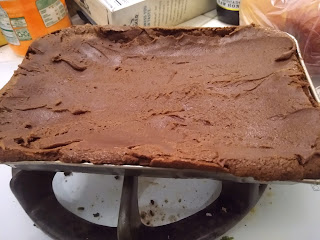 We all tried the frosting-crowned brownies and were delighted. It's basically a brownie with boiled fudge on top. As aforesaid, I usually don't think brownies need icing on top, but this really did improve on perfection.We all ate the entire pan with embarrassing speed. 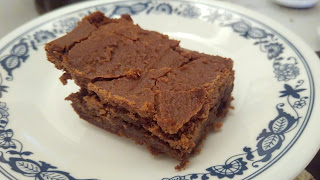 I know that a lot of boiled icings exist in the homemade world, but I've never done one until now. I began to think about how we might vary and play with the recipe. My first thought was this: when you first take the icing off the stove it's still very runny, and you stir it hard to pass the time while it cools and thickens. We thought to ourselves, what if we poured it out as soon as we took it off the stove? Would we get a lovely thin layer of glaze that turned into a delicate shell of fudge? 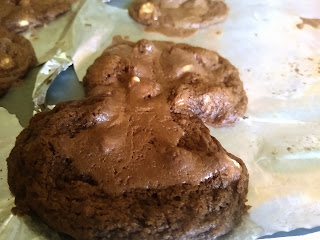 For those of you cooking along with us at home, this is the cookie recipe from the back of the Reese's chips bag-- except this time we used white chocolate chips instead. As you can see, we did not get the thin glaze we hoped for when we dumped the still boiling-hot icing on top of them. The icing separated out and just wasn't as nice as it could have been if I'd waited until it had cooled (stirring the whole time of course). However, the icing did cool off enough to keep itself together by the time we got to the last cookies in the batch. 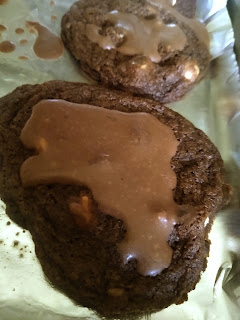 Both the cookies we iced in premature haste and the ones that we iced properly tasted just fine, even though the first ones didn't look right. But we started to wonder... if we separated the icing recipe from the brownies it came with, did we have a quick in-a-pinch recipe for fudge? We gave the icing yet another go (we've made it thrice so far,for those of you who are counting), with a new ingredient: 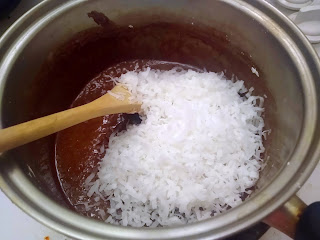 I thought we'd get delicious fudge-coconut clusters, but this really is a frosting recipe. They look cute, but they tasted like coconut and icing. The chocolate part did have a nice praline-ish texture, though. They weren't bad, but they weren't what I hoped for either. 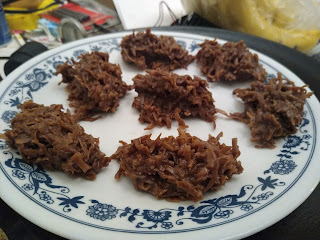 We ate all of these, but they weren't worth making again. But chocolate and coconut swirled in my mind after my previous attempt to unite them until I had a vision. I imagined the brownies filled with a generous amount of coconut because I like coconut a lot. I even had the perfect recipe which I had saved from Mid-Century menu a long time ago and periodically made when I thought my then-significant other deserved it. (Seriously, it's really good.)

This would be the perfect coconut filling for the brownie delight of my dreams- it tastes amazing, but it has never (no matter how many times I made it) set enough to serve as candy. This shortcoming never mattered since we always just ate it out of the pan with one spatula per person.

Here is a cross-section of what I imagined: 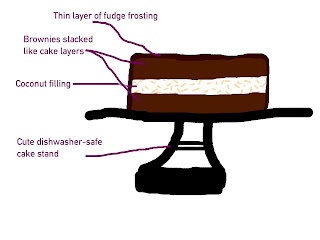 And here is what happened when the brownies fell apart when I attempted to stack them. 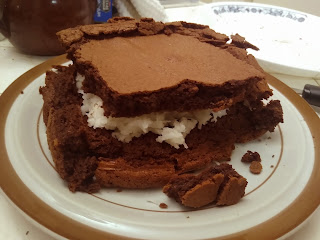 I should have known that such decadence would have been forbidden by nuns. But since I am not in a convent, I tried to cut the edges even (it didn't work) and make something semi-pretty. The icing certainly looked tempting as I poured it on. Take a good look at the photo below, because that's the last time this looks at all promising.

And here we see the tragic results. There was an attempt. 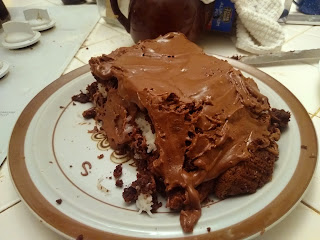 You may be surprised about this, but it fell apart into a sad chocolate coconut mess when you tried to cut yourself a piece. 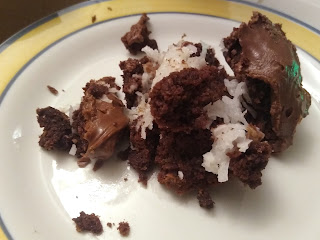 With that said, while my dream fell apart, all the components of my vision added up really well when you ate it--- except the icing that inspired the whole mess. It was too sweet on top of all the coconut and brownies. The coconut recipe uses unsweetened chocolate, and you should too. Sugary icing on top candy is a bit too much. I should not have defied God's yardstick-wielding enforcement squad by putting the fudge frosting on anything but otherwise-unadorned brownies.

However, the brownies and the coconut were absolutely perfect together. Also, putting the coconut candy on top of brownies solved the problem I always had that I could never serve it up. The coconut candy, no matter how many times I made it, always remained a sticky mess that clung to the spatula until you thwacked it onto your plate like a cafeteria lady slinging mashed potatoes. Treating it like a decadent brownie topping instead of a standalone delight seemed more right. But I definitely overdid it in making a not-majestic tower of chocolate. A single, non-stacked layer of brownies with the coconut on top would have all the deliciousness I envisioned without the structural instability.

In sum, this tower of cocoa and coconut was really good and also so rich that after a very small portion you were done eating it. Everyone will only want a little bit, so you can make dessert for like twenty soon-to-be-sated people without having to get out a second 9x13 pan. To give my attempted artistry some dignity, I want to show you that we did indeed have the layers we dreamed of in the part that remained on the platter after a few days of everyone hacking off a little bit when we needed just a chocolate lift. 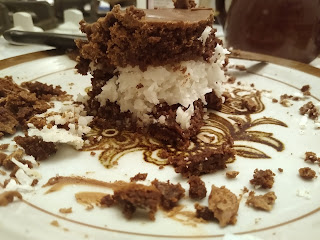 Also, the icing is very good and worth making again. If you're making a small batch of brownies, definitely consider pouring it on top.