One person in the house had a birthday recently, and a cake was called for! On account of it being an introvert's birthday party, the celebration consisted of a nonchalant group text that there was cake on the counter, there would be no singing, and small fires could be lit as desired. As we had previously stated that the Wacky Cake tasted like it was from someone's birthday, it was the natural choice. Also, we have a stack of these tiny pans, so we could make a small but still layered birthday cake. 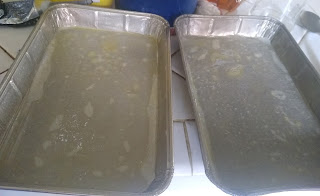 Because we wanted to actually do a layer cake, we made one big revision to the recipe: we got out a mixing bowl. It may seem like we just got rid of the one reason to make a wacky cake, but really it means it tastes so good you can mix it in anything.

You may think that we have turned the wacky cake into a wack-free one, but this was the day we found out that the cookie sheet we put the flimsy foil pans on was as warped as a potato chip. This caused some unfortunate cake tilt. 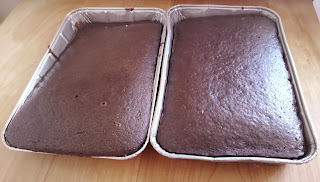 If we zoom in a bit, we can see that the cakes got downright crispy on one corner. 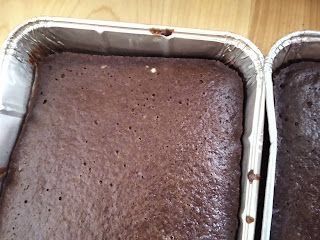 I tried to stack them in opposite directions hoping they would level out on top, but anyone who has tried this knows it never really works.

We wanted to know if the cake would actually let go of the pan if you mixed it in a separate bowl and then greased the pan first. It does. But it will then want to spangle any icing you put on top with unprofessional crumbs.

As a lot of people know, one can easily avoid crumbs in your cake icing (or at least reduce them) by simply freezing your cake before bringing out your icing and spatula. However, our freezer does not have that kind of vacant space. Therefore, the unimpeded cake crumbs ruined my perfect icing aesthetics.

Thinking of those fancy red velvet cakes where they cover the iced sides with more cake crumbs, I tried pushing the icing around with the spatula to raise so many cake crumbs into it that it would surely look deliberate. It definitely looks like an attempt was made.

But all was well when we cut the cake. It was absolutely delicious. And the birthday wacky cake had the wackiest of uneven cake layers which looked really neat (and name-appropriate) when we cut it. 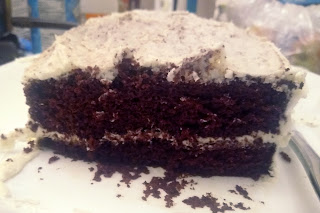