I knew I would make this recipe the moment I saw it. 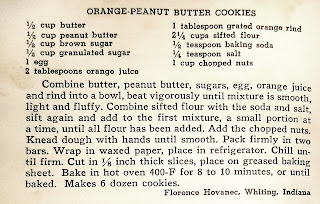 Peanut butter and orange are an unusual pair to put in the same cookie recipe (or at least I've never seen this anywhere else). But like the orange pie I did one Christmas, this recipe seemed more like an interesting novelty than a recipe that time thankfully forgot. We're making something just a bit outside the commonplace flavor choices, not something so unfortunate that Mrs. Cropley would have made it on The Vicar of Dibley.

I am enabled by other people in the house who just really like cookies and therefore encourage (or at least step back and tolerate) anything that involves multiple baking sheets and a hot oven. As previously mentioned, our new favorite beat-up old cookbook has a lot of recipes for things that are common today but have gotten a lot more codified and uniform in the intervening decades. You know how just about every latter-day peanut butter cookie recipe (unless you do some very deliberate recipe searching) is basically "make dough, roll into balls, dip/sprinkle with sugar, press grid lines with fork"?

This book has multiple peanut butter cookie recipes, which is not surprising. You see duplicate recipes in a lot of community cookbooks. After all, you don't want to elevate one lady (you never see men sending recipes into these) over another by excluding Ida Felton from the book and letting Loretta McAdams get all the credit in print for devil's food cake. But to my mild surprise, all of the peanut butter cookies in the Anniversary Slovak-American Cook Book are different recipes. We've got one recipe like the peanut butter cookies you see in cookbooks today, one recipe for drop cookies, and the citrus-infused delight (well hopefully it's a delight) we are making today. 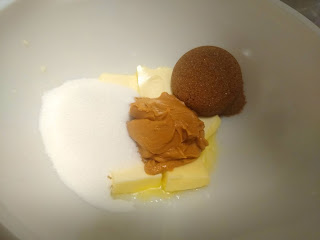 At first I was hesitant to make these because I feared people might be just as picky about peanut butter cookies as they can get about grilled cheese: add one shake of paprika and you've ruined the sandwich. I thought orange might be something people can't accept in peanut butter cookies. Then I decided to just make them anyway so I can stop wondering how they'd come out.

As a recipe note, the directions tell us to use the juice of fresh oranges along with the rind we grated off first. But we still have a partial can of orange juice concentrate in the freezer that we periodically thaw out and add by the spoonful to various things. 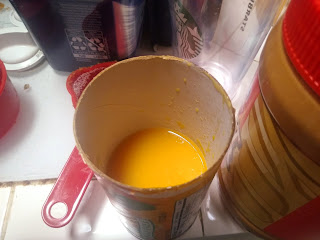 I was a bit surprised that the recipe instructs us to dump everything besides into a bowl all at once. It really shows how ubiquitous electric kitchen power tools had become in the kitchens of people who couldn't hire domestic staff. You can try to do this with a wooden spoon, but you will really wish you had done like so many recipes tell you to: beat the butter and sugar separately, then add your eggs and other runny ingredients. I suspect that when Florence Hovanec wrote that we should dump everything in the bowl all at once, I she used those one of those marvelous kitchen appliances that almost everyone could finally afford. I only got this well-beaten result after following the wisdom of Our Patron Saint of Cookrye, Fanny Cradock: think of someone you've never really liked but you're too well-bred to say anything so you take it out on your dessert. 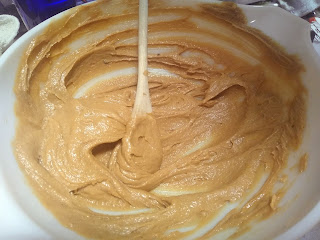 After adding the flour, this went from one of the runniest to  one of the stiffest peanut butter cookie doughs I have made. 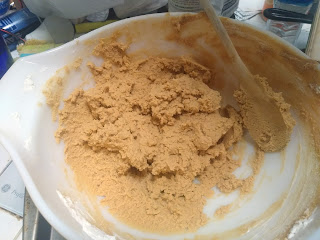 With a bit more Fanny Cradock-inspired spoon thrashing, we got this citrus-touched mess to coalesce into something that was, if not malleable, could at least be forced into whatever shape one may desire. At this point, I checked the recipe and found that we are shaping these into logs. But more importantly, we're probably not having cookies tonight. The recipe tells us to "Wrap in waxed paper, place in refrigerator. Chill until firm." Meaning, if we want cookies tonight, we are either making something else or buying them. 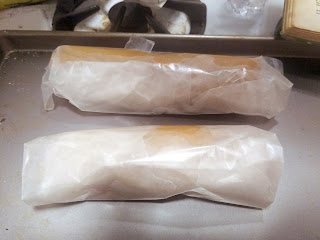 I tried to hurry these up by freezing them, but as you can see by the rough surfaces, the dough wasn't really firm enough to cut very well. Had I attempted the eighth-inch slices the recipe tells us to make, the dough would have just turned into mush on the knife. Not that I mind thicker cookies; thin wafers are rarely something I wish I had in my life. I do wish I could get my icebox cookies to come out in a cuter shape than "random splotch of misshapen cookie dough." 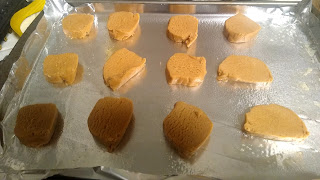 Given how hard this dough was before it saw the inside of a freezer, I did not expect these to rise as much as they did. I didn't the dough was flexible enough to allow any leavening. But instead of getting hardened dough bricks, we got some delightfully puffy cookies. 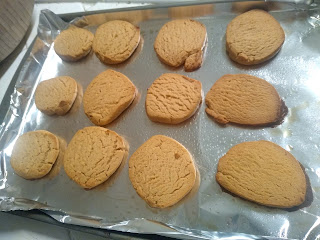 As the remaining cookie dough remained in the freezer while the first batch baked, it sliced more smoothly. Had I waited overnight I could have easily cut these as thinly as the recipe tells us to. But if I had patience, I would have had to wait longer for cookies. 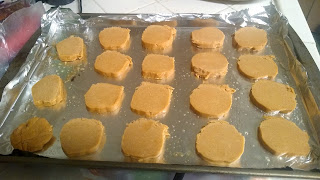 And here we have our orange-perfumed plate! I put the second batch that got frozen longer and therefore cut more smoothly on the top of the pile for presentation purposes. 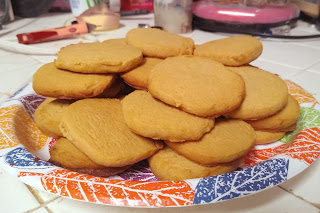 Peanut butter and orange go together so well that I'm surprised I've only seen them put together in this one recipe from 1952. The orange flavor kind of hung in the background of these, though I had expected it to be a lot stronger. Maybe it would have been had I used fresh oranges and also grated off the rind.  But they're like if shortbread was just a bit softer, and they taste wonderful.