Recently, an interest was expressed in blondies. By which I mean I said I wanted to make them and no one else minded. However, in the course of cutting the recipe in half, I made one tiny mistake at the very end. 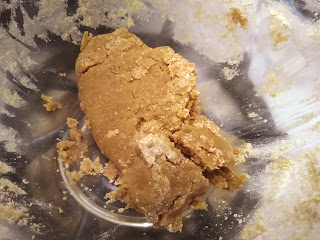 I've made a lot of brownie recipes. While some make a batter as runny as chocolate-colored gravy and some make a thick concoction that needs a bit of help reaching the corners of the pan, I have never made a brownie recipe that you could crumble in your hands. I re-checked the recipe and realized I had cut every ingredient in half except the flour. 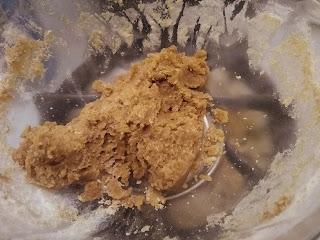 In my defense, this recipe is unusually thick for brownie batter, so it's easy not to notice that the flour is making it unusually stiff until you've gotten it all mixed together. As you can see from when we gave in to popular demand (viz. one person in the house asked for it) and made chocolate-marbled blondies, these are almost too thick to be a batter but not quite thick enough to be a dough. 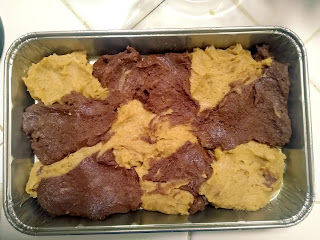 We needed an awful lot of swirling with a spoon handle to get these to look properly marbled instead of like an inept attempt at a checkerboard. 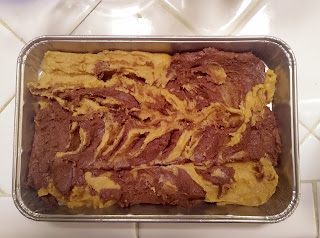 Back to today's (mis)adventure. Two choices lay before us: mix every ingredient except the flour all over again then force it to mix with this brown-sugar clod in the mixing bowl, or just bake it anyway and see what happens. (We are assuming that "throw it away and start over" is unacceptable because I do not believe in wasting groceries.) I figured this impending failure looked a lot like cookie dough, so why not see if it can turn into cookies. 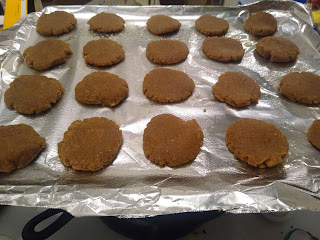 I didn't know if this should-have-been-brownie mixture would turn into a hot runny puddle when heated up, if these would turn into hard cookie-pucks, or if we would get actual cookies out of this. I didn't even know if they were the kind of cookies you just plop onto the pan, or if you need to flatten them first-- though the dough was so stiff that I figured a quick pat between the hands could only help. To protect against them running over and dripping off the pan, I made sure we had raised sides to keep the cookies contained in case they got a little bit too free-form. 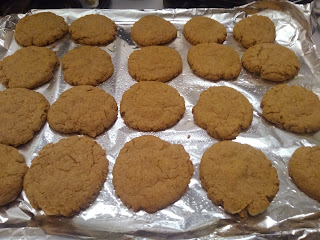 Maybe it's not exciting to try to make cookies and then make cookies, but these things came out really well. We had to take them out just as the dough barely browned at the edges to prevent them over-hardening, but these are very similar to Mrs. George O. Thurn's slice-and-bake blondies without waiting for the cookie dough to harden enough to cut. 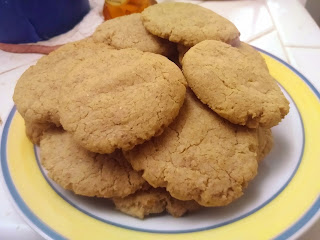 These cookies can easily be overbaked on accident, but if you take them out just as they're barely darkened around the edges you get a wonderful crunchy outer crust with a really dense, soft interior. If you like the brown sugar, you will be glad if you make these. And don't you think this is a much better way to deal with critical recipe errors than throwing your unbaked mess away? 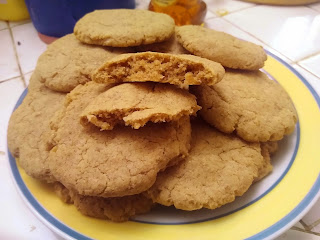