An interest was expressed in oatmeal cookies. I could have used the recipe in the big Better Homes and Gardens binder cookbook, but it uses only one egg in a recipe that makes like five dozen cookies. We do not have enough people to eat five dozen cookies in this house, (Well, we would definitely eat them all but I would have to start letting out everyone's clothes. If you do any sewing, you will know that letting out modern store-bought clothes usually involves coming up with a lot of extra fabric to insert into your to-be-expanded garment, which is a lot more work than making fewer cookies.) 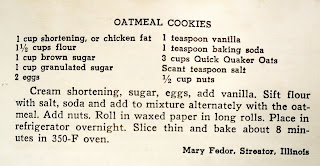 Now, a word about ingedients. The recipe tells us to use either shortening or schmaltz (viz. chicken fat). We decided to almost use schmaltz, except with a change of species. 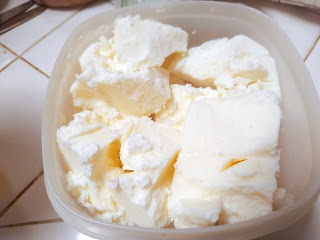 Back in the Before Times, we used to get the extra-lean hamburger and skip draining it. Now we have this big tub of economization in the refrigerator.

We've already found that beef fat doesn't add any meat flavor to anything (if it did, we wouldn't have put it in shortbread twice). The recipe says we should use chicken fat (or shortening). I don't think Mary Fedor would mind too much if we used cow fat instead. 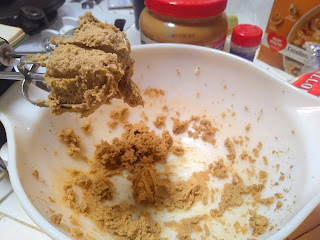 And here we have the proto-cookie sludge! After this point, I looked at how much flour this sugary gravy is supposed to receive and decided the hand mixer couldn't handle it. Also, at this point I added some cinnamon because I like that extra flavor in oatmeal cookies. 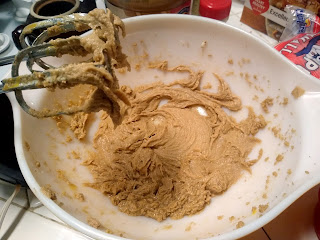 At this point, I reached into the pantry for the oatmeal and found that-- horrors-- we only had the instant kind! Surely this meant the end of our oatmeal cookie endeavors until the next grocery trip. A lot of recipe guides will tell you to use the quick-cooking oats in cookies but never the instant kind lest your oatmeal cookies die a horrible death. In my baking class, when we made a massive batch of oatmeal cookies for some faculty lunch, we were given dire warnings about how using the instant oats would ruin everything.

Oddly enough, no one ever says why. Since we weren't going to put this half-finished cookie dough in the refrigerator until we could get the proper, Fornax-approved oatmeal for the cookies, we decided to bear the risk of oven explosions and whatever other kitchen disasters might ensue from the use of incorrect oats. (Fornax, as you either already know or are about to, is the Roman goddess of the oven.)

Usually, recipes tell you to get the cookie dough completely mixed before adding the oatmeal, raisins, or whatever else. I always figured it was so you could tell whether you had any unmixed flour clumps before they hid themselves amongst the oatmeal. But this recipe tells us to add them alternately, and I'm not going to argue with someone whose recipe got accepted by the Cookbook Committee (always capitalized). 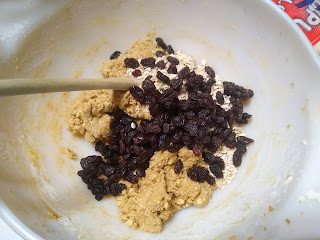 With the last of the oatmeal, I added the raisins. I like raisins as much as those children who get them while trick-or-treating. I was especially disappointed after one of those how-to-eat-healthy talks I went to for the free food. The registered dietician told us that raisins are basically candy as far as nutrition is concerned, leaving me to think about how many times I could have just eaten chocolate instead. But I like raisins in oatmeal cookies. They add little concentrated spots of tartness that makes the cookies so much nicer. 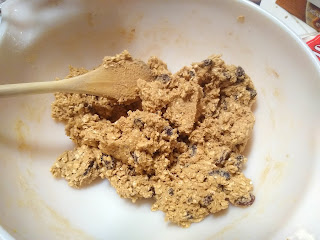 The recipe tells us that these are icebox cookies. I want to warn anyone following along at home that there is no dignified way to make a log of oatmeal cookie dough. 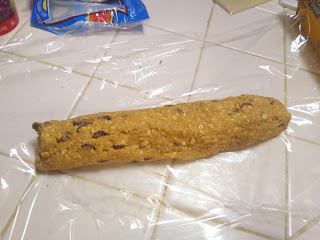 Making a slice-and-bake log of oatmeal cookies is about as embarrassing as baking brownies in a cornstick pan. I thought it was bad enough making brown logs of chocolate icebox cookie dough, but these are worse. If you make these, be sure to have a frying pan ready to swing at any attempters of scatological humor. Otherwise the jokes will get too repetitive for the unarmed.

Depending on your perspective, these lovely logs were either worse or better when frozen enough to, er, stand on their own. 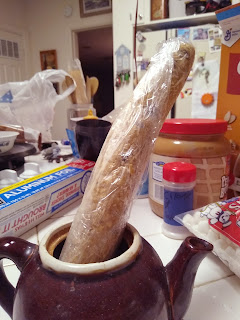 All this business of refrigerated cookies to slice and bake proved a waste of time. This is what happened when I tried to cut them. 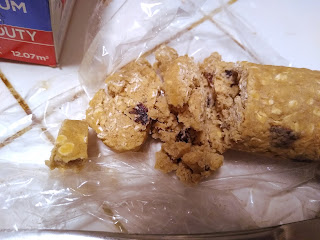 A few cookies came out intact, but I shouldn't have bothered. You may be thinking I should have used a sharper knife, or a different shaped blade, or suchlike. I tried half the knives in the kitchen, from chef's knife to cleaver. None of them were any better. Perhaps this is the dire fate that befalls those who try to bake instant oatmeal.

I cut up half the log before giving up and got a few intact-ish cookies that I had to very carefully lift onto the pan. I then rolled all the crumbled cookie dough into balls and flattened them between my hands. Because the dough was still hard from refrigeration, the oat flakes scratched at my hands a lot. 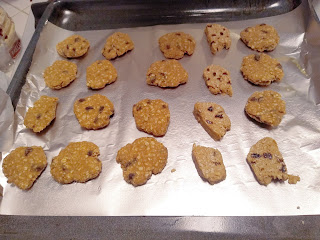 If we look at the only intact slices I got out of this, we can see fissure lines showing how they may not have broken apart but they really wanted to. 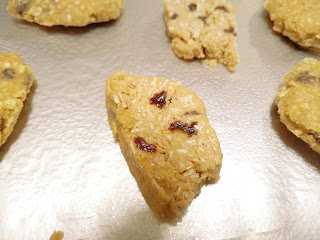 While the first batch baked, I got out the other dough log and cut it up to see if it would do any better than log no. 1-- it didn't. But at least cutting the dough up helped it soften enough to shape into actual cookies. 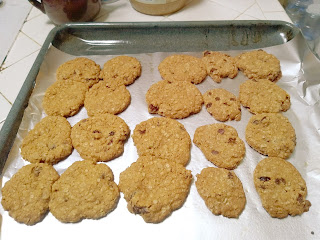 Honestly I think the rolled-and-flattened cookies came out better than the sliced and baked ones. They looked just a little bit nicer. 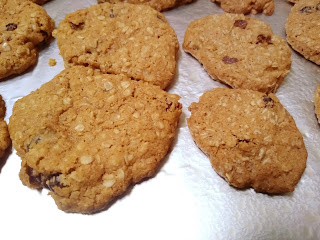 When we bit into one of these, they were the crispest cookies I've ever made. If you've ever stacked three Pringles at once and ate them, you can get a good idea of what we had made.

We could have used these cookies to record the sound effects for those aggressively perky commercials where Florence Henderson sang about frying chicken in Wesson oil. Seriously, when you bit into one of these it sounded like a Doritos ad. Because one of the other people in the house found this even funnier than I did, we have audio.

You might think they were tooth-breakingly crunchy, but if we crack one open you can see they rose into thin flakes and layers. It was about one fourth of the way between cookie and something with phyllo dough. 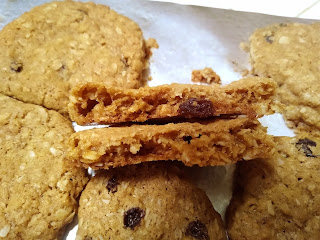 I don't know if it was the beef fat or Mary Fedor's recipe, but these cookies are crispier than multiple fistfuls of potato chips. If you skip the refrigerate-slice-and-bake business and just shape them in your hands, you will love these cookies.