Today's recipe begins with a request.

Usually in the weeks after Christmas, I'm in the mood for nothing but green salads and light vegetables until I recover from the delicious onslaught. Other people in the house disagree, and there was an overall droop in household mood after the last of the Christmas cookies vanished. (I don't even know where the cookies came from, they just appeared on the counter in the days leading up to December 25.)

One person said in particular he liked the pecan balls that had made an all-too-brief appearance in a gallon bag of assorted cookies that, as far as I can tell, appeared anonymously in the kitchen while I was asleep. I half-lied and said I had a recipe. The lie here is that I implied that I had actually made the recipe before. In reality, I decided this was as good a time as any to dredge up the remains of First Lady Bakeoffs.

In 1996, the First Lady Bakeoff still got a lot of space in the newspaper, Bill Clinton was running into his second term, and Hillary Clinton's recipe was about to defeat yet another political cookie. We've previously discussed the history of the First Lady bakeoff, and will only note that you can see the winner of the 1996 cookie contest just from the name of today's recipe. You will not beat chocolate chips in a bakeoff if you bring nut rolls. 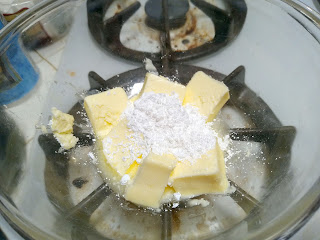 It appears 1996 was the year of the butterless bakeoff. Hillary Clinton would once again ride a victory train on shortening-greased rails. Elizabeth Dole would use margarine to become, as they euphemistically say, first runner-up. Though perhaps she was just as uninterested in a cookie contest as Hillary was. Her Wikipedia page shows a very long political career which suggests that regardless of whether enjoyed baking, she likely had little interest in a public domestic-science contest. 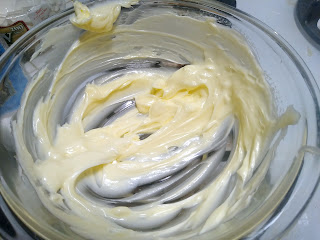 At first I beat the butter and rather small allotment of powdered sugar with a spoon for a little bit. Then I looked at the recipe to see what's next and saw that we have no leaveners in it. That means that, like the waffle iron cookies before them, the only leavening in this recipe is your effort. To properly aerate your dough-in-progress, you could take inspiration from Fanny Cradock. She would stare at the television camera and tell you to think of someone you've never really liked (but you're too well-bred to say anything) so you take it out on your cooking. Or, you could get out the power tools.

And here we get to the ingredient that gave me pause in this recipe: tap water. Granted, it's only a little spoonful, but I'm not used to seeing people add water to cookies. I'm guessing that the dough was a bit crumbly without it. 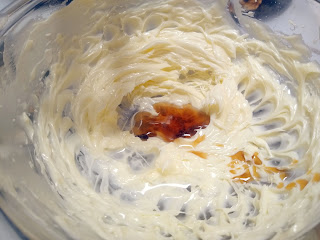 There. Now that it's all mixed, you'd never guess that we watered down the cookies. 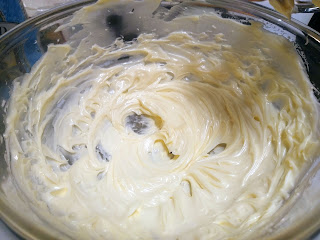 After adding the flour, the cookie dough was surprisingly bland. I'm guessing it's because I used butter instead of margarine. We purchased margarine for the cookie recipe on Maxine Menster's grave, but no one cut today's recipe into stone.  This may have been a mistake, because butter just doesn't have that artificially intensified butter flavor that margarine does. I had added a bit of salt to make up for its absence in our margarine-free cookies, but they still tasted a bit blank. 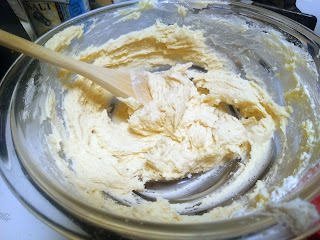 Well, as promised, we put pecans in these. The chopped pecans cost less than the intact ones, meaning that for once I could economize while also doing less work. At this point, the person who instigated this recipe came into the kitchen. It was so sweet to see his face light up and say "Ahh, my wish is being granted!" 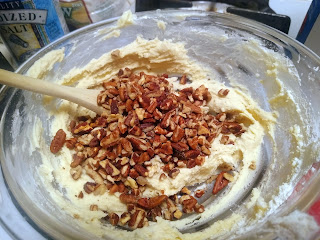 And now we get to the shaping of them. The original recipe tells you to basically shape teaspoons of this into little pecans. I made a few according to the original specification, but I like these better when they're shaped like spheres. They just seem to have a nicer texture after baking. You can see that after making a few teaspoon-sized balls, I got tired of dealing with all these tedious teaspoons and got out a tablespoon instead. (For those of you who live in metric countries, a tablespoon is three teaspoons, meaning I tripled the cookie size.)

I suspect that Elizabeth Dole used generous teaspoons of dough rather than carefully-measured ones. You can see that we got two dozen cookies here, which is just about half what the recipe told us it would yield. Given that we cut the recipe in half, you would think that we would have far fewer cookies since we made about half of them triple-sized. 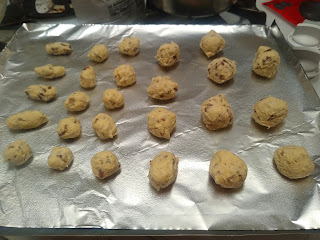 Long before the cookies were done, the smell was already taking over the house. They also already had that distinctively toasty overtone that tells you your cookies are no longer hot dough. Honestly, they smelled like they were done long before the specified one hour of baking time elapsed. But who am I to argue with would-have-been First Ladies? I figured these are probably supposed to dry out like biscotti, and therefore they should stay in the oven the whole time. They puffed up a lot more than I expected for cookies with no leavening. Maybe the water turned to steam early enough to puff out the dough a bit before it all baked and hardened.

Figuring that they very likely would not burn at such a low temperature unless I baked them overnight, I did my best to ignore the wonderful intermingling smells of roasting pecans and nearly-baked cookies. The house smelled a bit like those nut roasters you see at carnivals who sell barely-cooled candied nuts. 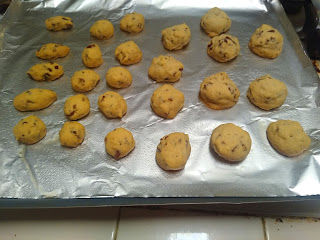 I should note that the recipe claims to yield 50 cookies. We're halving the recipe, so in theory we should get 25 cookies (minus however much cookie dough mysteriously disappears before it can get baked). We made about half of the cookies to the original specified one-teaspoon size, then decided we could be done baking a lot sooner if we tripled the cookie size by using a tablespoon instead.

Nevertheless, we got two dozen cookies, which is one short of the 25 cookies we should have gotten had we made all the dough into the tiny size from the original recipe. In other words, the recipe says "one teaspoon" but I think that you're supposed to make them a lot bigger. 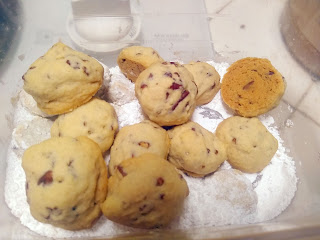 The recipe has us rolling the cookies in powdered sugar. In case you didn't know, that is absolutely not the way to make these things right. What you really want to do is bury them in powdered sugar immediately out of the oven and leave them there until they cool off. Anyone who does anything less is totally missing the point.

Yes, you will find that powdered sugar is the culinary equivalent of glitter- it gets everywhere and you can never clean it from every last corner and crevice it got into. And you will probably use half a bag of the stuff properly immersing the cookies (I sift it and then put it back into the bag afterward). But it really is the only way to get these cookies to be absolutely perfect. You will, however, have a surprisingly hard time finding all of the cookies when it's time to gently lift them out of their sugar bath. 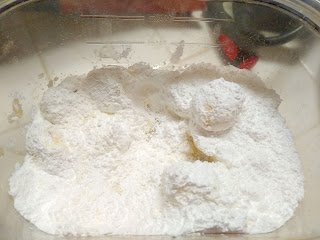 ---I couldn't resist the tantalization after the long wait. When the timer went off, I entered the kitchen to find that the whole room smelled powerfully like those burnt-sugar pecans you can get at outdoor festivals. After dropping them into the powdered sugar, I waited barely a minute before plucking out one of the smaller ones and tasting it. Where the cookie dough had been a bit bland, the cookies were a crispy burst of delicious toasted nutty flavor that almost crumbled to flavorful powder as soon as you bit into them. 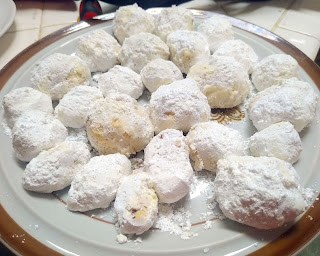 Above, we see a few of the cookies shaped according to Elizabeth Dole's specification (those are the more oval-looking ones on the front left of the plate). We then have some balls, measured out with the same teaspoon as I used to make the pecan-shaped ones. And of course, we have the big mega-cookies when I got tired of making so many little ones.

Below, we see some cookies baked exactly as specified. I tried to break one in half to show the middle, and this happened. 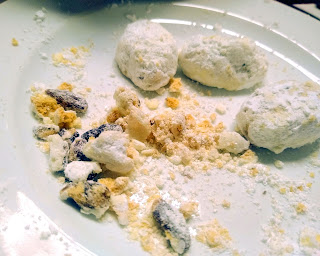 So yeah, these cookies are a bit more delicate than I thought. After an hour of drying out in the oven, I expected something a lot harder- like cookie croutons or something. Instead, you get these delicate cookies that just barely hold it together until you eat them- and I mean that in the best, we-are-making-this-recipe-again way possible. However, the consensus was that these cookies, while delicious, were perhaps a bit dry. If we (more carefully this time) break one in half, we see that they didn't just brown on the outside like most baked things do. They turned the color of medium toast from outside to center. 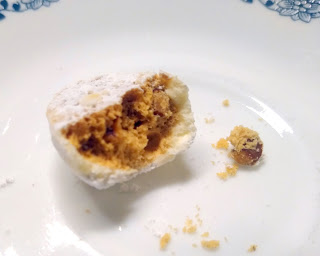 Despite the dryness, everyone kept pecking at the cookie plate until it emptied in far less time than it should have. However, one person noted that perhaps I could make them a bit smaller. However, one teaspoon was a bit puny. I used the half-tablespoon instead. 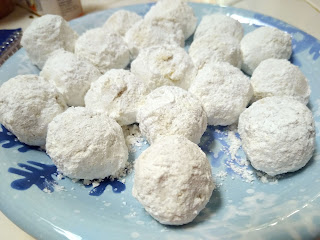 Ah, perfection! I also baked them a bit shorter. At 45 minutes, the cookies are baked through and crispy, but not so dry. For this batch, the more finely pulverized pecans were on sale, so that's what we got. But I'm going to suggest you treat yourself and get the pecans that are broken up rather than finely chopped.

In sum, I can tell why Elizabeth Dole sent in this recipe. It's so good I already made it multiple times--- by request/demand of others. I can also see why Hillary Clinton won the bakeoff. No amount of powdered sugar can beat chocolate chips in America. 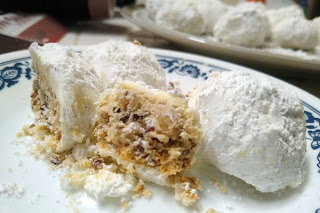 On a closing note, last month on the 17th, we finally brought music into the kitchen! It's so nice to be put on lively tunes when making supper.

It turns out that a lot of record stores will just let you take home large boxes of 78s with the purchase of a phonograph. I came into the living room to see this stunning example of the "attention, students" type of record player and a shoebox of lovely music waiting to be played on it. After decades of grinding out the audio tracks to filmstrips about the life cycle of earthworms and the history of Wisconsin, it's now playing actual music that people like.