Jacket Potatoes: or, Baked potatoes when you want to run your oven for a very long time

It's cold out here, which means that we at A Book of Cookrye are getting excited about baked potatoes! I've seen a lot of people rhapsodize about "jacket potatoes," which I had not heard of. I imagined it to be a cute dish of miniature-sized potatoes served in their skins with herbs all over them. I looked them up and found out that the term is simply Britspeak for baked potatoes. However, people across the Atlantic they seem to get a lot more excited about baked potatoes than we do here. This prompted us to ask: do they bake their potatoes differently over there?

Turns out, they do!

For obvious reasons, we would not ordinarily fire up the oven to 400 degrees (that's around 205° for all our Celsius friends) for two hours just for some potatoes. It's an energy extravagance that perhaps makes more sense in the UK, where it's apparently chilly enough that trophy kitchens often display a half-ton cast iron stove that's always turned on and heating up the place.

However, the temperature outside recently dropped to well below freezing, and it seemed like the perfect time to run the oven to unnecessarily high temperatures for far too long a time. Instead of putting the oven in battle against the air conditioning, we would cozy up the kitchen. Also, in Texas you just never know if you'll still have electricity when it snows, so you have to enjoy it while it lasts.

The instructions are very short, but they are a few sentences longer than my customary method of perforating the spud with a fork and then microwaving it. The baked potato is truly one of the simplest foods in existence. Therefore, people can get hilariously religious about the One True Way to make them.

If you think people get snobby about the correct preparation of things like with extravagantly long French names and corresponding prices, you need to read the surprisingly angry arguments about the correct way to make cheap and easy foods. For example, people get passionate the right and wrong way to make a grilled cheese. The cheddar vs. processed cheese fights can go on for pages, and that's before we get to the bitter dispute on whether an errant slice of tomato turns it into a melt or if it's still grilled cheese. Where I live, people will say they're above such bickering.... and then launch into sermons about proper barbecue techniques. It's almost as fun to read as the everlasting debate on whether a hot dog is a sandwich.

Bringing this back to today's venture, people can have very passionate feelings about the correct way to insert a potato in the oven. The "floury vs waxy" dispute can go on longer than it takes to actually bake a potato. Indeed, people can argue about correct versus blasphemous spud-baking methods for longer than it takes to bake a potato in a woodstove, and that includes the time required to build the fire yourself.

We are instructed to first cut a cross on top of the potatoes. A paring knife would of course be perfect for this, but I left mine in my other purse.

Well, that was quick enough! I guess now we merely put them into the oven. Normally I wouldn't heat up an entire oven for a few spuds, but I've been wanting to try this method ever since I read a lot of improbably enthusiastic prose about them. I don't know anyone who gets that excited about a baked potato around here, so perhaps we are doing it wrong. Also if you realize that you're actually excited about a new (to you) way to bake potatoes, you just embrace the fact that your entertainment doesn't cost much sometimes.

After a very short time, the cuts began to widen as the spuds shrank.

Don't the potatoes look lonely in such a big, empty oven? It seems foolish to heat up an entire oven for spuds. Even if you have a smaller oven in the wall, it's a lot of empty space to heat up. Baking your potatoes in a more moderate oven, as we generally do on this side of the Atlantic, allows you to put the rest of dinner in there with them.

One of the spuds started foaming a little. I do find it strange that the others did not. 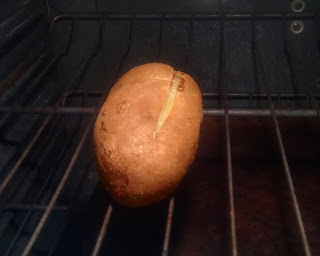 We are instructed to remove them from the oven when they're practically done, re-cut them, and return them. Which I did, but I don't know if it made any difference. I thought that maybe the starchy interior of the potato melts back shut under the skin or something, but that didn't happen. Nevertheless, the hot cross spuds were crispy and done. 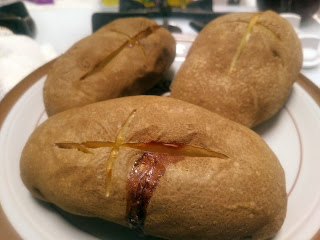 If you're going to do these for yourself, I suggest you cut them from end to end instead of just in the middle like I did with these. However, if we carefully lift up the flaps and pull these open, we are first struck by how the potato skin nearly isn't crispy and crackly but crunchy. Second, I've heard people wax poetic about fluffy baked potatoes, but this is the first time I've seen one. 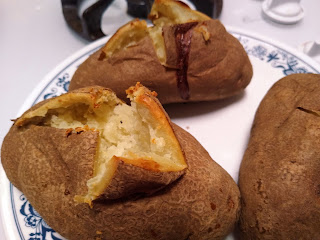 You can better see the inner fluffiness when you really split the spud open. 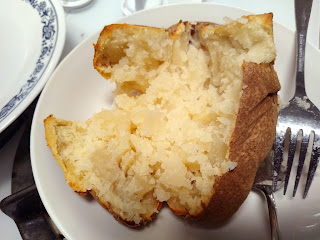 Apparently it's customary to serve these with a lot of butter and suchlike on top. However, on this side of the Atlantic we have invented the loaded baked potato.

I would only make these in the winter when the oven heat would improve the house. But with that said, I definitely recommend making these! It's so simple but so, so good. We made them again with a bit of oil and salt rubbed on them before baking, and they were even better.