Butter Finger Dessert Bars: or, Three-fourths of the recipe name is a lie 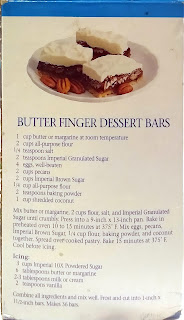 I thought that this recipe, with the name Butter Finger, predated the candy bar. But Wikipedia tells me that Butterfingers date back to 1923. Also, did you know Butterfingers are Italian? They're from the same company that makes Nutella. I haven't been this surprised about confectionery since I found out that Kit Kats are British.

Moving on to today's recipe, this is the first Butter Finger recipe I've seen that neither imitates nor incorporates the candy bar. This recipe is also a lot more, shall we say, involved than the other recipes I've seen. The Butterfinger recipe I have encountered the most is a "Butterfinger cake," which has graced many a potluck I've gone to. The recipe seems to be "Make one box of cake mix according to directions, then put a layer of crushed Butterfingers on top instead of icing."

I don't get why today's perpetration is called "butter finger" at all. The only butter in the recipe (assuming you put oleo in the icing) is in the crust. It doesn't resemble the candy at all, and it doesn't look particularly buttery. It looks like the recipe writers started with a pecan pie. They then replaced the pie crust with one that you finger-press into the pan (which agreeably simplifies things), and put icing on top so they had an excuse to put it on a powdered sugar box.

Before I made the recipe I thought this was going to basically be a cookie crust. Then, upon actually reading the recipe (as one often does when making it) it looks more like a pie crust. However, things were not going according to the instructions. The bowl of (what I thought should be) pie crust didn't look crumbly like the recipe claimed it should be. I did not expect this because back-of-the-box recipes are (theoretically) tested by a passel of kitchen staff before they get printed on any food labels. I checked the ingredient list to see if I had either mismeasured something or made a mathematical error when halving the recipe. I had not. 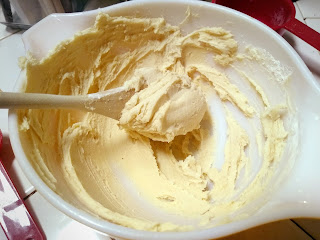 This allegedly crumbly crust was the stickiest mess I have tried to press into a pan in a long time. I tried spritzing my hands with cooking spray, but it only helped for a few seconds before the dough stuck to my fingers anyway. 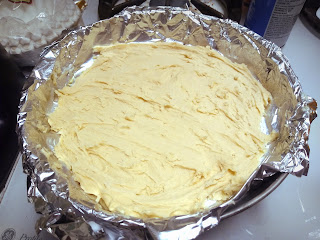 When I first examined the recipe closely and saw that we weren't doing a cookie dough crust, I was afraid it would be really bland and a waste of time in this recipe. Then I saw how much sugar we're putting on top of it. So aside from suspecting that this would be a failure of a crust because it didn't look like the recipe claimed it should before baking, I was ready to move on to the pecan-coconut affair that goes on top.

I thought I would whisk the flour in first to really bash out any lumps, but a few little ones persisted until I added the sugar which broke them up. Therefore, I think this separate whisking step was a waste of time. You can probably just dump the flour and sugar into the eggs and beat everything together at once.

Since we're cutting this in half, I was able to measure out the coconut and pecans into one cup which I then set aside until things were ready for them. They reminded me of those cute layered cookie mixes that were a popular gift for a while. You know, the ones where you put sugar, flour, chocolate chips, and whatever else into a jar, making cute-looking stripes of all the ingredients instead of just dumping them in. 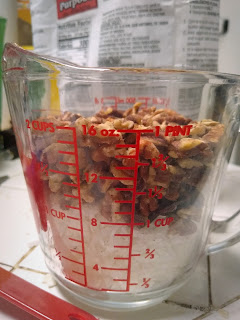 Extremely observant people will notice that I accidentally used twice as much coconut as I should have. I am very glad I made this mistake because it only improved this quasi-pie. 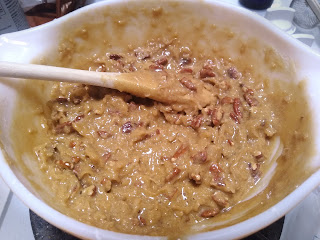 See? It looks like we're making a pecan pie except with coconut shreds. Granted, the round pan is definitely adding to the pie-like appearance. However  I wouldn't be at all surprised if I could find this exact recipe for pecan pie in a very old cookbook. It looks like someone added the coconut to make it just a bit different and then put a crust that's easy to make (if not worth the bother) under it to make it different enough to avoid plagiarism.

Anyway, this is one of the thickest pie fillings I ever made. They don't often need a spoon to force them to spread. 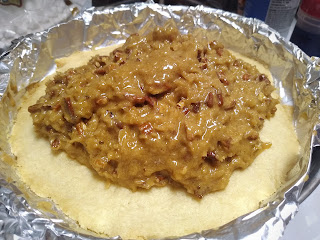 I had imagined this recipe would produce a thin layer of this candy-nut stuff on a crust, but this is a lot of pie filling. And let's just go with calling this a pie. It looks like a pie, it's acting a pie, the only thing we're missing is a crust that goes up the sides of the pan. 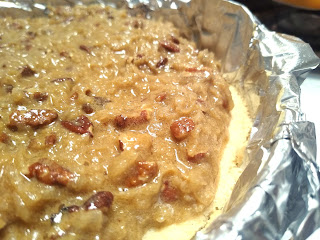 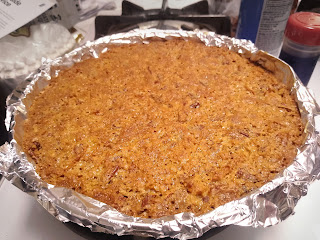 The recipe instructs us to cool the pie completely before icing it. Fortunately, it is miserable outside. 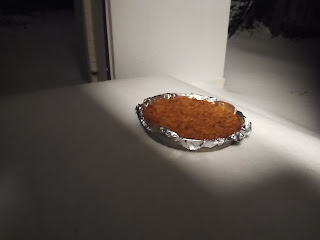 I put a sheet pan on top to keep further sleet off, and it was ready to ice after just 10 minutes in the snow. Using the weather for culinary purposes reminds me of when I visited a dear friend/relation in Olympia (that's in Washington state) during the winter. The way the house was cut into the ground, her bedroom window was right at ground level and tucked under the second-floor patio. We would set cases of (store-brand) Diet Coke outside, and the upper deck hid them from view. It was amusing in its own little way to open the window for a can of Diet Coke as easily as normal people would open the refrigerator.

Moving on with the recipe, I thought I would avoid using the electric mixer for the icing because it always kicks up powdered sugar dust no matter how carefully I try to beat things at slow speed. This was a waste of time. All I got was a whisk filled with icing ingredients that lodged themselves in there and would not come out. Therefore, if you have an electric mixer I definitely recommend you use it for icing. 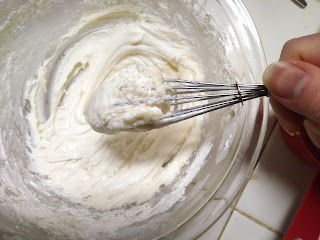 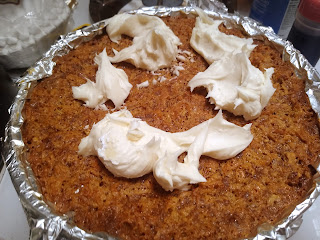 The top appears interspersed with broken-off pieces of pie, but that's actually where the icing is so thin that the pie shows through. I think the thin icing was for the best. This pie is so sweet that a thick slathering of icing on top would have been so sweet even the most sugar-happy six-year-old would have been overwhelmed. 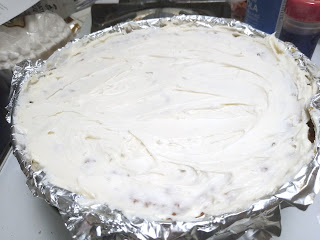 All right, let's go back to the illustration on the back of the box and see what these, um, dessert bars should look like.

And let's get a look at what we actually got. 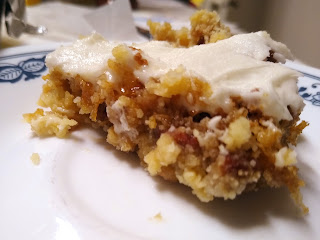 This is the best-looking piece we got out of this. I think we can safely say that if you tried to cut this into tiny squares like the recipe claims, they would all crumble to nothing. I will also add that despite our promiscuous use of cooking spray, the crust stuck to the pan. However, I do have to give the recipe writers credit: the crust may not have been crumbly during mixing like the recipe thought it should have been, but it was certainly crumbly after baking. It fell apart and left fragments behind, no matter how skillfully one operated the pie spatula. You don't lift pie slices out of the pan; you scoop this out like cobbler. 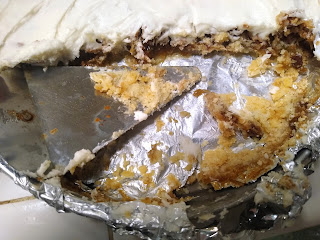 I thought the icing was superfluous, and really only an excuse for using enough powdered sugar to print the recipe on a powdered sugar box. Others disagreed, thinking it improved the pie a lot. The extra layer of concentrated vanilla on top did make the flavor more complete. However, in the future I might use a light drizzle of glaze with extra-concentrated vanilla instead of icing. 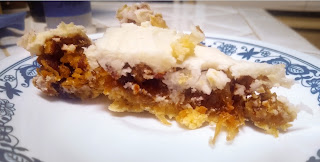 So, I highly recommend making this, with a few changes. First, cut the recipe in half and bake it in a pie pan. It's really rich anyway, so a big pan of it is excessive unless you're bringing it to a big party. But don't cut the amount of coconut in half. Second, ditch the crust that came with recipe and use an actual pie crust (bake it before putting the pie in it). You might roll the crust a bit thicker than usual if you make it yourself, so that it really holds together when you lift out a slice. Third, I wouldn't bother with the icing. Put a lot of vanilla into a small batch of glaze- much more than you normally might. Then lightly drizzle it on top.