Get out the cheese grater and the root vegetables, because carrot cake is back!

This recipe comes from our Pieathlon friend Poppy Crocker, who posted it not too long ago. If you haven't read her blog, go over and have a look at Grannie Pantries! She writes about the many community-compiled cookbooks where half the recipes begin with "open one can (undiluted) of soup" and end with "top with shredded cheese and bake until bubbly." She shows, in detail, the recipes (good and bad) that daily graced countless dinner tables for many years, but that no "culinary expert" ever deemed worthy of documentation. She also writes about the long and lamentable wheat-germ-and-carob years of health foods, documenting the trials and the punitively bland miseries that some blessed people endured in the name of nutrition. And she gets full credit for expounding on the subject of desserts that are also salads if you serve them on a lettuce leaf.

You may wonder why we're making a sheep wagon carrot cake (whatever that is). After our stovetop went out, we had to remove the oven to fix it. This meant that while the oven was not broken, it was nonetheless out of order. After we got the oven back in the wall, I offhandedly asked what we should make to commemorate its return to service.

I enthusiastically pass the blame for this particular carrot cake onto the person who, staring at the carrots that occupied far too much refrigerator space, said "You know, I've never had a carrot cake..." And no, I didn't prompt anyone. I hadn't even mentioned the existence of carrot cakes to anyone in the house.

For those of you who aren't familiar with my baking history, for a few years an inexplicable number of carrots appeared in my refrigerator whenever I wasn't looking. I didn't go out and buy them, but they showed up anyway. This led to me shoving them all through a meat grinder and making a long succession of carrot cakes.

The nonchalant solicitation for a carrot cake led to an uncalled-for rant about how I once had an onslaught of carrots and tested more carrot cake recipes than anyone should make. Although I started my little tirade at a normal volume, my voice started bouncing off the walls as I informed everyone in the kitchen and in the house next door that most carrot cake recipes are pasty, gummy, and terrible- which is why there was no pandemic-induced carrot cake craze to go with all the banana bread renaissance. (For the only good "normal" carrot cake recipe I've found, see here. Or try this delightful lemon-carrot cake here.)

Unfortunately, once carrots start taking over the refrigerator, you can't get rid of them with just one cake, although the first one I made was happily short-lived. This brings us to Great-Grandma's Sheep Wagon Carrot Cake.

When I saw the recipe, I thought it looked like a War Cake with carrots in it. With that in mind, I also have a theory about why you're supposed to rest the carrots for twelve hours even though the recipe writer says it's a mystery. The war cake recipe tells you to boil the first few ingredients (just like we're about to do with Great-Grandma's Sheep Wagon) and then let the pot cool all the way to room temperature before adding the flour. The war cake recipe says it's "very important" to cool it completely. Perhaps Great-Grandma decided to make a war cake and also get rid of some unwanted carrots.

I once was impatient and added the flour to a war cake when the pot was still lukewarm. The flour promptly clumped up. Even after I gave the batter an extra-hard spoon-thrashing to break up all the gelatinous flour-lumps, the cake just did not taste right. You really do need your pot of boiled ingredients to be completely cold if you want your cake to come out right. 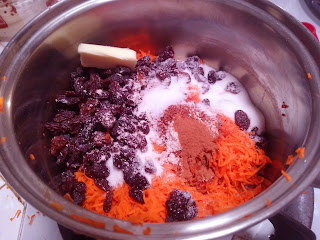 While the carrot and its new friends simmered, the kitchen smelled like I had a spice cake in the oven and vegetable soup on top of the stove. But as you can see, the boiled carrot shreds looked unpromisingly stringy and sad after taking it off the burner. Perhaps I am a bit wary after making so many dud carrot cake recipes, but I was already preparing to tell Great-Grandma to roll her sheep wagon right back where it came from. 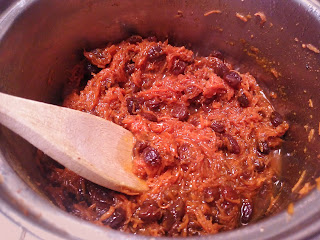 True to the recipe's directions, the pot took about twelve hours to get to room temperature. However, after twelve hours I was ready for repose. While the pot of boiled carrots and raisins may have enough sugar to keep it from going off for an extra day, I didn't want to risk it. So I put the room-temperature saucepan in the refrigerator to wait safely in the cold until baking time.

I hoped the boiled carrots would look better the next day, but they did not. The raisins plumped up and looked a bit jauntier, but everything else looked just as brown, stringy, and ruined as it had the night before. There also wasn't a whole lot liquid left in the pot. While I had earlier thought that the recipe didn't have enough flour, now I wondered if it used too much of it. I expected to have a lot of crumbly flour clay with carrot shreds in it. But after a good stirring, we had a well-mixed boulder of raw carrot cake.

After baking, the cake was so firm I feared it was ruinously dry. I immediately poured cinnamon icing on top in an attempt to counteract the dryness. I needn't have worried. Upon cutting it, the cake came out perfectly nice, surprisingly fine-grained, and-- wait for it-- moist, once we cut into it. 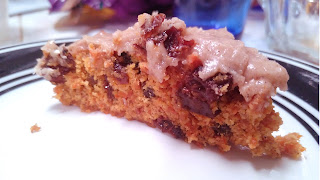 As we were eating this (the second carrot cake in three days), one person asked me "So what is the point of carrot cake? Because this is basically a spice cake. Is it to get rid of carrots? Like, what do the carrots do?"

I don't know the answer to the first question. Maybe the carrots in carrot cake are like the blueberries in muffins, and are present only to help you delude yourself into thinking that a cake is healthy. Or maybe a lot of people wanted to just do something with the excessive carrots that spawned in their kitchen like they do in my refrigerator.

If you are hoping to turn a bevy of unnecessary carrots into dessert, Great-Grandma's Sheep Wagon Carrot Cake will not help you. This entire cake contains just one carrot. Pick a recipe that will use more carrots per cake. But Great-Grandma's Sheep Wagon Carrot Cake is a really good spice cake. True to its name, the recipe tastes like something you'd have gotten from your great-grandmother.

If you want a vegan carrot cake recipe, you could easily use vegetable shortening or margarine instead of butter in this recipe. Since the cake only uses a small spoonful of butter, substituting it won't change the taste at all. To my own surprise, we're going to add this to the list of good carrot cake recipes. It's not merely  "good as far as carrot cakes go," it's just plain good.