Hump-Day Quickie: Summer Coutons: or A Free Oven Stands in the Driveway

Maybe this is unusual, but I like eating croutons like some people enjoy potato chips. When I was younger, the practice of wasting perfectly good croutons on top of a salad confounded me. Which brings us to today's recipe:

We had the heels of this lovely rye bread, which remained uneaten long after the rest of the loaf was gone. 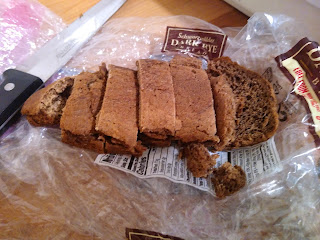 There's no need to get complicated with the seasonings- especially with a flavorful bread like rye. I just did salt, pepper, and paprika.

I did not wish to run the oven just to toast some cut-up bread scraps, but then I remembered that it has been so hot even people's yard cacti are drooping. Which brings us to how I baked these: 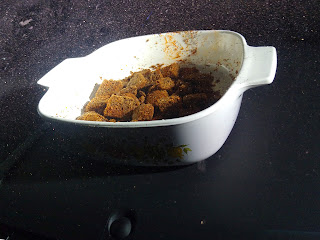 Obviously, many people before us have made use of the inadvertent solar cooker parked outside their domiciles. There are also a lot of people who cook on the engine itself during long drives. (A quick hat doff to Lace Maker for reminding me that Manifold Destiny exists!) I just thought it was silly to run a hot oven just to toast some cut-up bread heels. Furthermore, the car was going to get hot whether I put food on the dashboard or not. 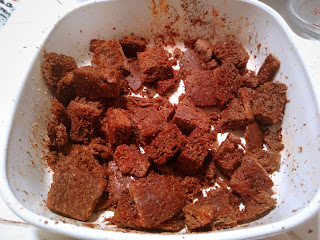 Using the car as an oven ended up working really well. The croutons were crisp without getting hardened like they would in the oven. When I brought these lovely rye croutons in the house, no one else was impressed with them. The general response was to look at the pan, and then back at me with the unspoken question "Is this what we're having for dinner?"

Granted, I don't think one can make a pan of brown bread cubes appealing without a lot of presentation effort and a hard sales pitch. Since I did neither, no one else wanted to eat the croutons that I had spent literally the entire hot day making. It's their loss.

I was originally going to say that if the thermometer has already reached one hundred degrees (that's 38° for our Celsius friends*), your car is a wonderful way to turn bread into croutons-- or to make bread easy to crumble up if your recipe calls for a lot of breadcrumbs. However, when I got into the car two days later, the smell of herbs and seasonings thwacked me in the nose as the superheated air flew out the driver's side door.

So if you're going to make croutons or any other highly-seasoned food in your car, you will have to leave the windows down all night to air out the smell. Obviously, most of us cannot realistically do that. So, any future "the sun is my oven" undertakings will not involve my dashboard. You just know that after a few repeated baking attempts, the smell would embed itself in the upholstery no matter how much one tried to air the car out.

*Yes, I know that technically 100°F is 37.7°C, not 38°C. But by the time it gets that hot outside, even the most pedantic of people will not care about a less-than-one-degree difference. ⤴