Is it better to grind your own meatballs?

Today on A Book of Cookrye, we proudly present the first time we fall for what those hoity-toity cooking magazines have been yammering on about! (side note: does anyone actually cook out of those, or do you just set them out so visitors think that you may be the sort of person who makes salted-caramel truffles in orange blossom honey?) That's right, we're taking a pricy cut of meat and grinding that sucker, because fresh-ground meat is apparently ever so much better!
Also, we have a guest photographer who held the phone (What? Me? Afford a camera?) while I had icky raw-meat hands. Yes, Marcus (who you may have seen tasting what is to date my favorite creation on this site) gets credit for just about every picture with raw meat in it and also for cranking half of the meat through the grinder.

Now it has to be cut small enough to get pulverized. It's gotta get squeezed into the grinder if we're pulverizing it, eh?
Anyway, after it was cut up a bit, this is the magnificent moment!
All right, now it's time for the magnificent moment!
About a third of the way through this, I started to figure out why only magazines for really rich people go on and on about buying $20 cuts of meat (you know they're not waiting for it to go on sale) and grinding it up- this is really tedious. I can pulverise a cauliflower in about 3 minutes; it took about 45 to get the meat through- excluding time spent periodically removing the connective tissue that blocked it up.
And even when the grinder's not clogged, the meat doesn't fall off. You have to stop every few cranks to pull it off or else it starts getting flung about.

You don't do fresh-ground meat yourself, you throw this at the hired help who you've also got putting up with your insistence that you should baking your own bread fresh to make the croutons. Then you get them going on the salted-caramel lobster whatever the hell it is with truffles on top that you saw in Real Simple.
Meanwhile, in my mixing bowl, we've had bread soaking to a mush. We now wish we weren't using the bread with seeds in-- it looks like bugs. It could be worse, it could be another chicken beetle.
We're getting to the normal part of meatball making! Finally!
First, look at your pot bowl of meat and realize you'll be having a lot of meatballs. 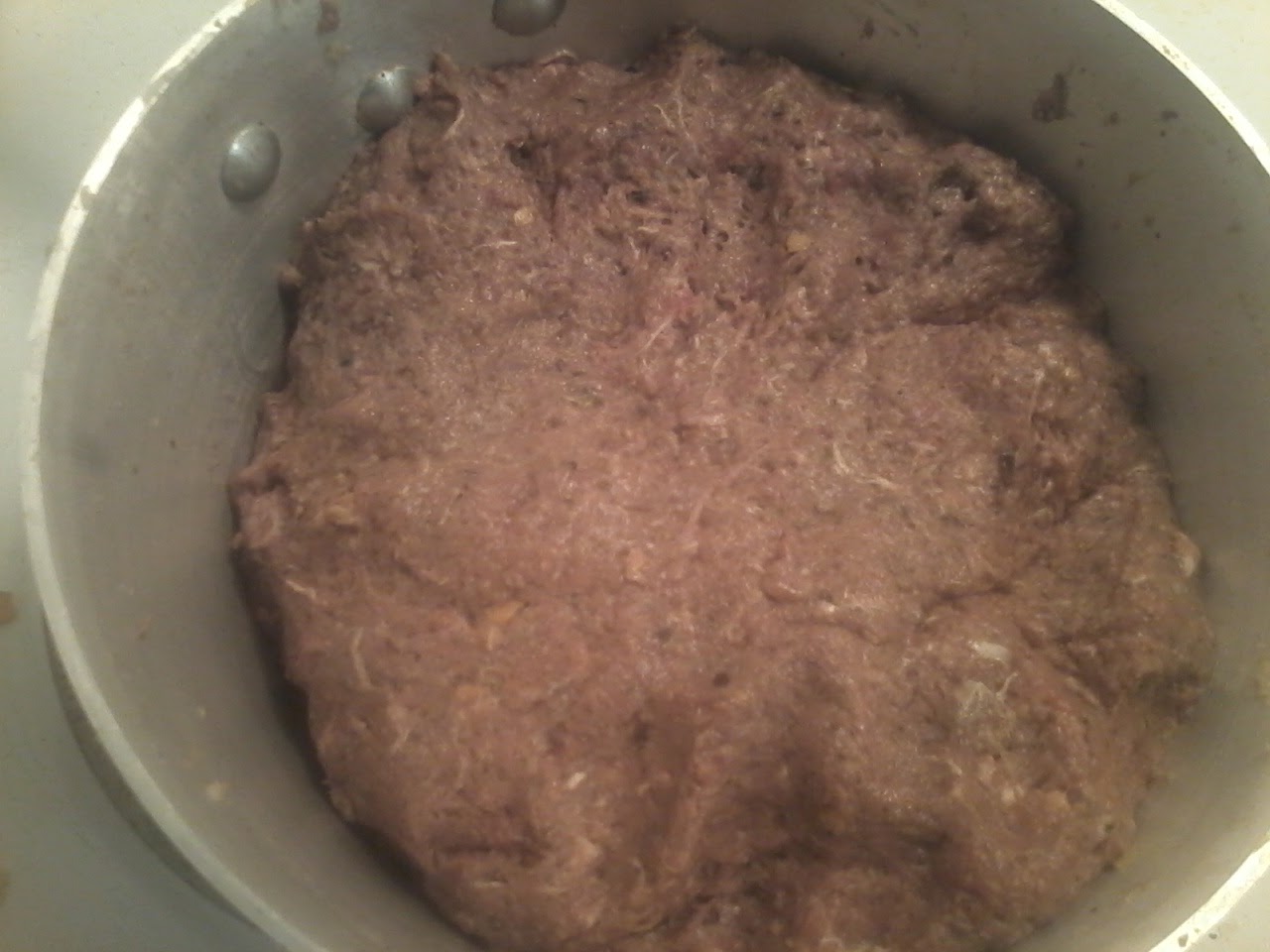 Second, mix together flour and a little paprika (enough that you'll be able to taste it) in a nice, broad pan.
Now, shape your meatballs and coat them!
Finally, decide that doing one of these at a time is for suckers.

By the way, we ended up with not one but two pans of these.
I've tried cooking them on the stove, but I end up squishing them trying to get them cooked on all sides. So now I just put them on a (very well greased!) pan and bake them. All you have to do is just pop them in the oven and then pull them back out.

...Yeah, some of the flour stayed white which looks kind of unnerving. But it's totally worth coating the meatballs in it because then you put them in the sauce, clap the lid on the pot and shake to coat, and...

Italian cookbooks often mention a sprinkling of cheese with your spaghetti. I may have overdone it.


So now, we answer the question: is it better to grind beef yourself? ...Well, I couldn't tell. They're definitely better than those frozen meatballs you can get by the sack. The texture was definitely better than the cheap ground beef with mystery stuff added- they were very firm. They may have tasted better, but since we threw in 4 garlic cloves, a box of mushrooms, and an ungodly amount of pepper, I couldn't really tell.
Anyway, not going to rule either way on this one yet. Fortunately, I got another beef slab on sale (let's hear it for learning what day the supermarket marks down their meats!), so I'll try it again soon and this time make something less hyperseasoned so I can actually tell.