Just take what's left in the fridge and shove it in a pan: moving out of the dorm

Hiya from on the bus again! I'm writing this one just after finishing the last one and still noting some of the interesting things we're passing. This is the story of taking the last dregs of the fridge and ending up with something surprisingly delicious that I'd totally do again on purpose.
When last we left off, I'd attempted to make a quiche and made something drippy, runny, and also too rich to actually eat. Marcus and I were going to use it in a lasagna, but didn't have time. So it was the night before I had to be outta there since semester's over. and That's a funeral procession next to us? I'd wondered why so many cars were going so slowly with their emergency lights on. Marcus had something going every one of the two nights we could have met to make a quiche lasagna, but (this is a sign of what a friend he is) he dropped off some noodles and spaghetti sauce. All he had in the house was manicotti, and we'd figured we could slit them open, lay them flat, and if that didn't leave us close enough to lasagna noodles, it'd be good enough anyway. And I'd like to pause for a second to teach everyone a Very Important Life Lesson: When a friend stops by to drop off ingredients for a dinner even though he'll be unable to stick around to make or eat it, that's a really good friend.

I was exhausted from packing things and shoving them into the van, and had I not been starving from, well, packing things and shoving them into the van I'd probably have skipped over the whole thing and figured I'd eat when I got done. One of the nice things about driving through the sticks is that there's no one in front of you slowing down to gawk at someone pulled over on the roadside. We didn't change speed at all. When I move, I usually pack at nearly the last minute and do all the hauling in and out of the vehicle in the middle of the night because the sun is evil and wants to burn me. Also, if I'm going to do all that driving I'll wait until the roads are dead for the night.
But I had a whole day left and nothing to eat besides a quiche, some spaghetti sauce, and some chicken in the freezer. Since I'd been schlepping all night, I wasn't up to boiling noodles, layering stuff in a pan, and all that.
I didn't even have the patience to cut it up for cooking; I just pulverized it and called it done. 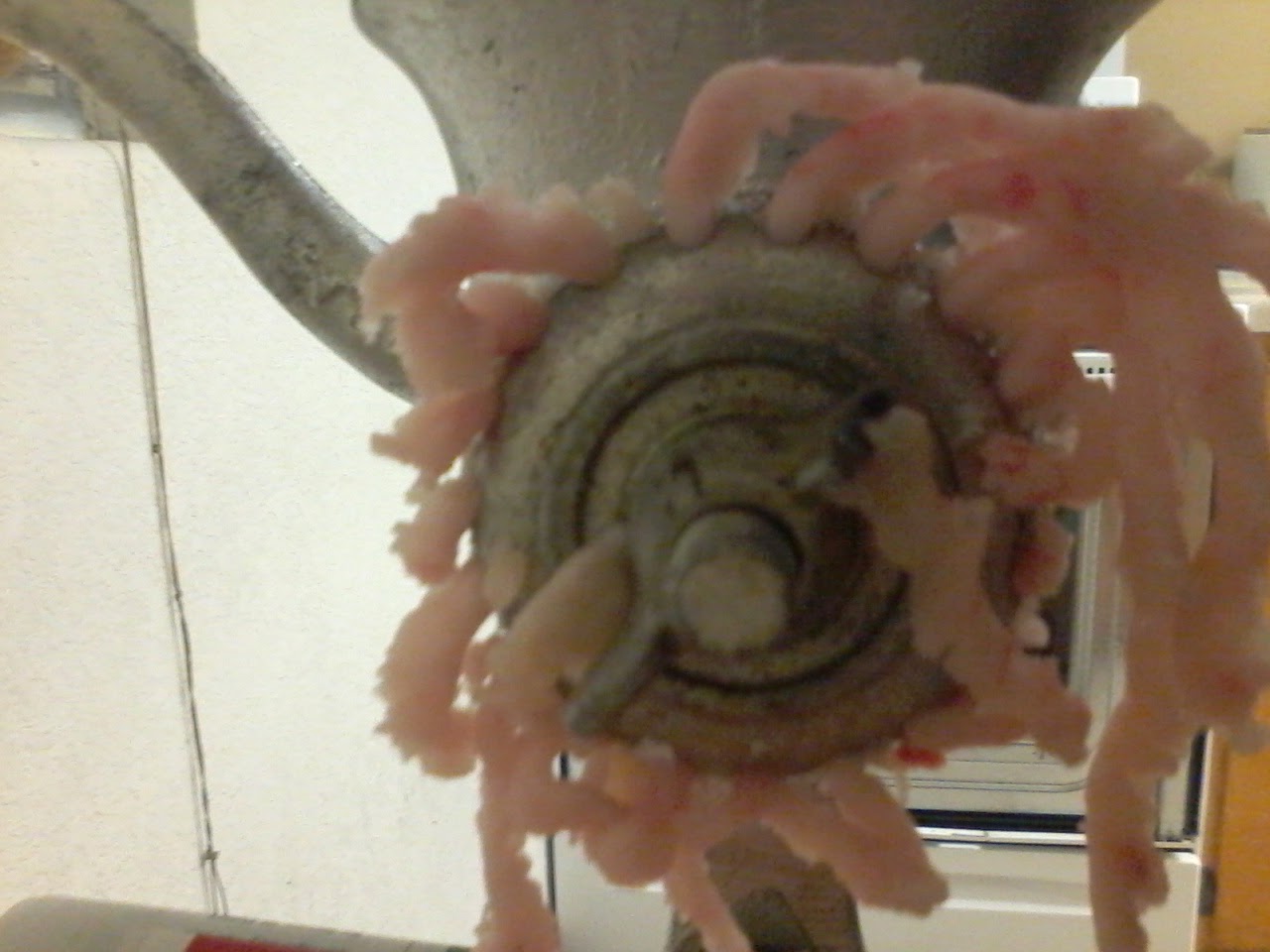 But look at it! That's chicken spaghetti! If it holds its shape, it'd make the best chicken noodle soup ever! 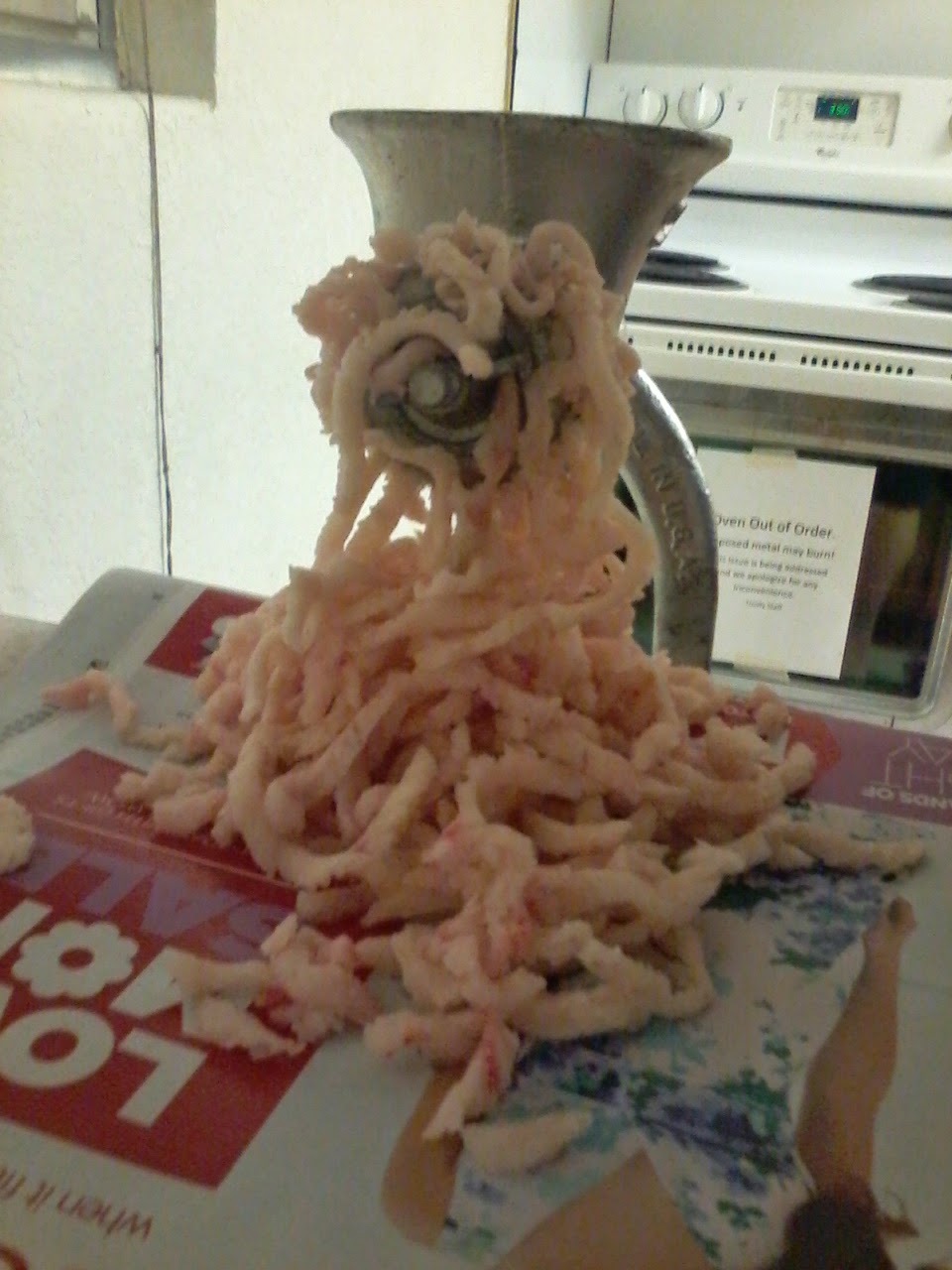 Behold the massive pot of chicken yarn! When I was exhausted from packing and hauling, this was making me laugh a lot. 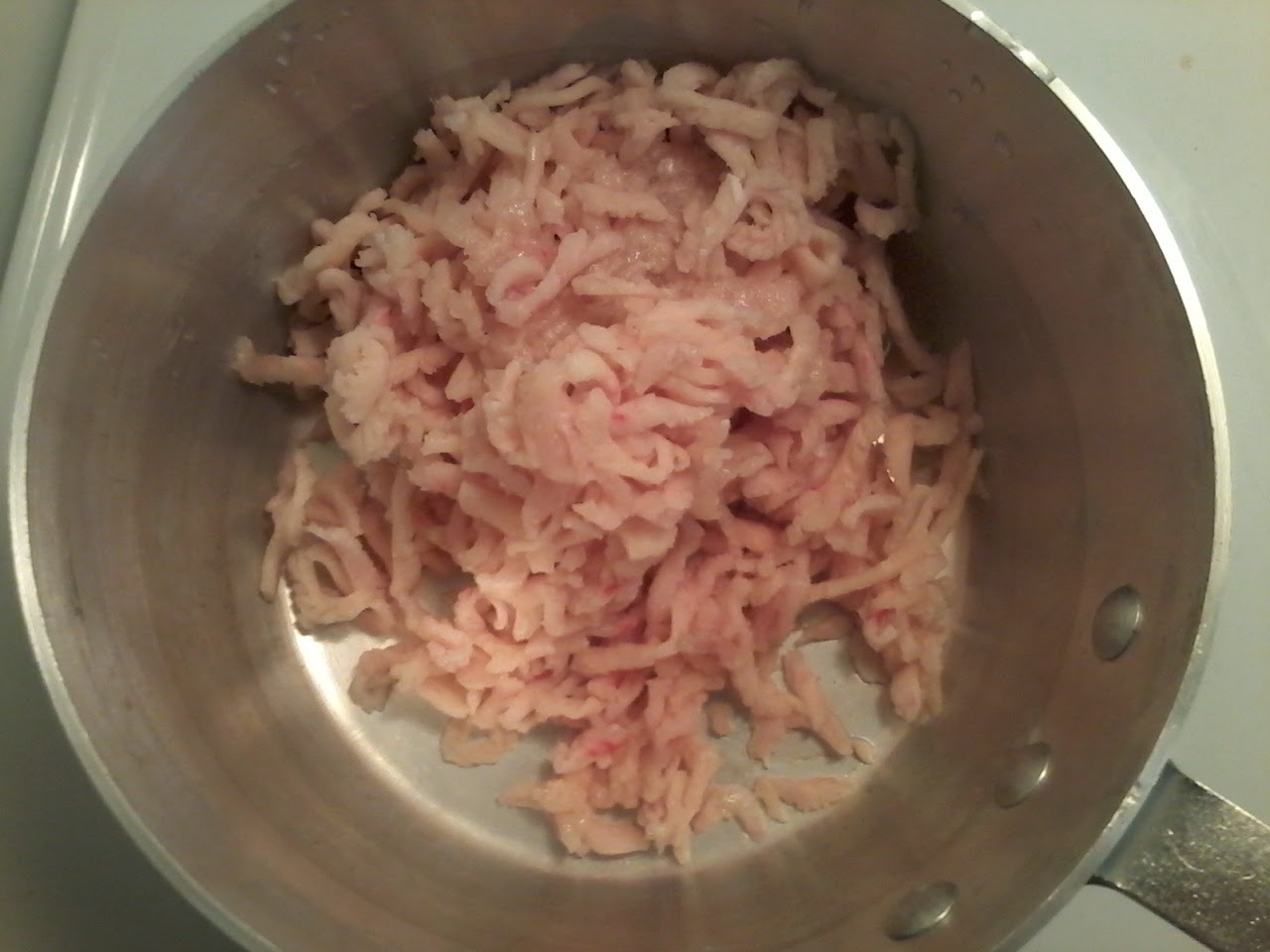 Unfortunately, as soon as I started stirring it, it stopped being chicken spaghetti and turned into plain ground chicken. Two people are using regular suburban lawnmowers on a pasture. Hope they have all day.
Time to shove it all in a pan and hope it works! I tipped the quiche out of the container I'd stuffed it into.
I'd kinda decided to make a layered thing- kinda like I was making a lasagna without the noodles. Also, I'm not doing any repeated layers because it's 2AM, I just hauled a vanload of stuff to my parents', and I've got another one to do when I'm done- and then I've got to have at the room and bathroom(!) with vacuums, bleach, and who knows what else. Just passed a mother and daughter on a hot pink four-wheeler. If it didn't make my day, it at least made the next couple of hours.
So, first we smoosh the quiche onto the bottom of this. I figured that way the spaghetti sauce will soak down into it as it cooks. 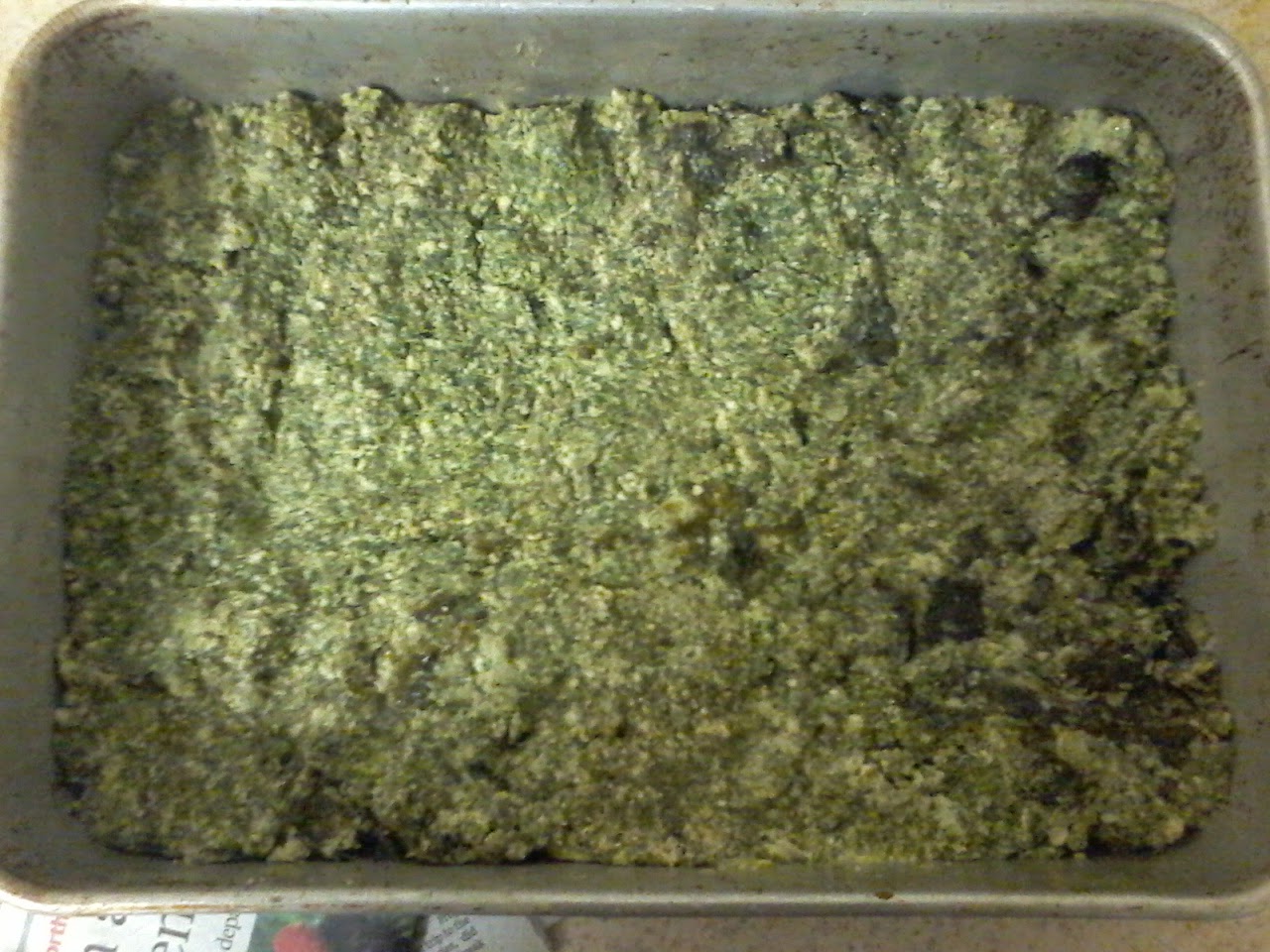 Second, we sprinkle the chicken on it. 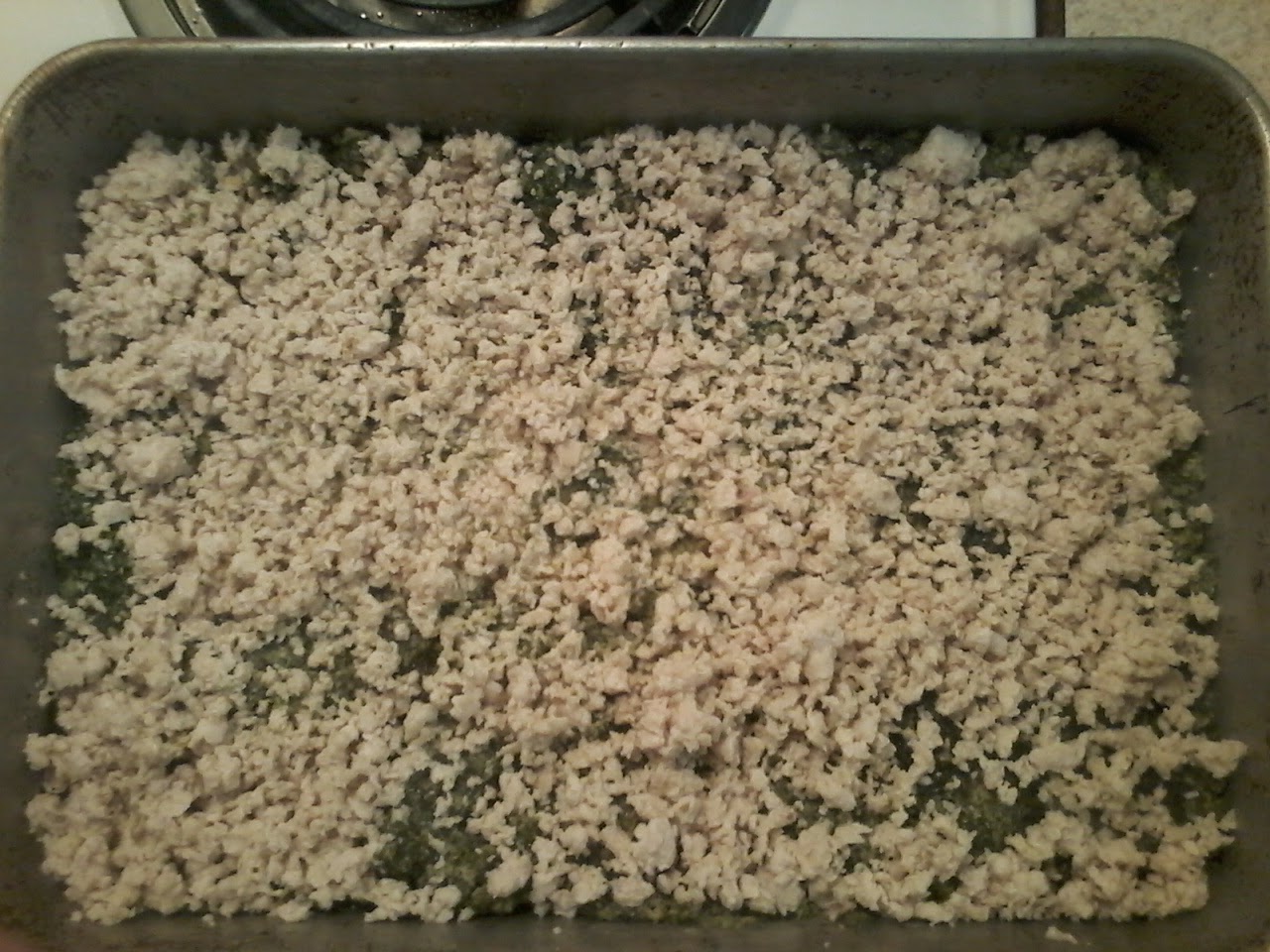 Third, spaghetti sauce!
Finally, Marcus left another round of queso fresco in the fridge when he moved out. I realize one doesn't generally put it on top of a quasi-lasagna-thing, but I don't care. 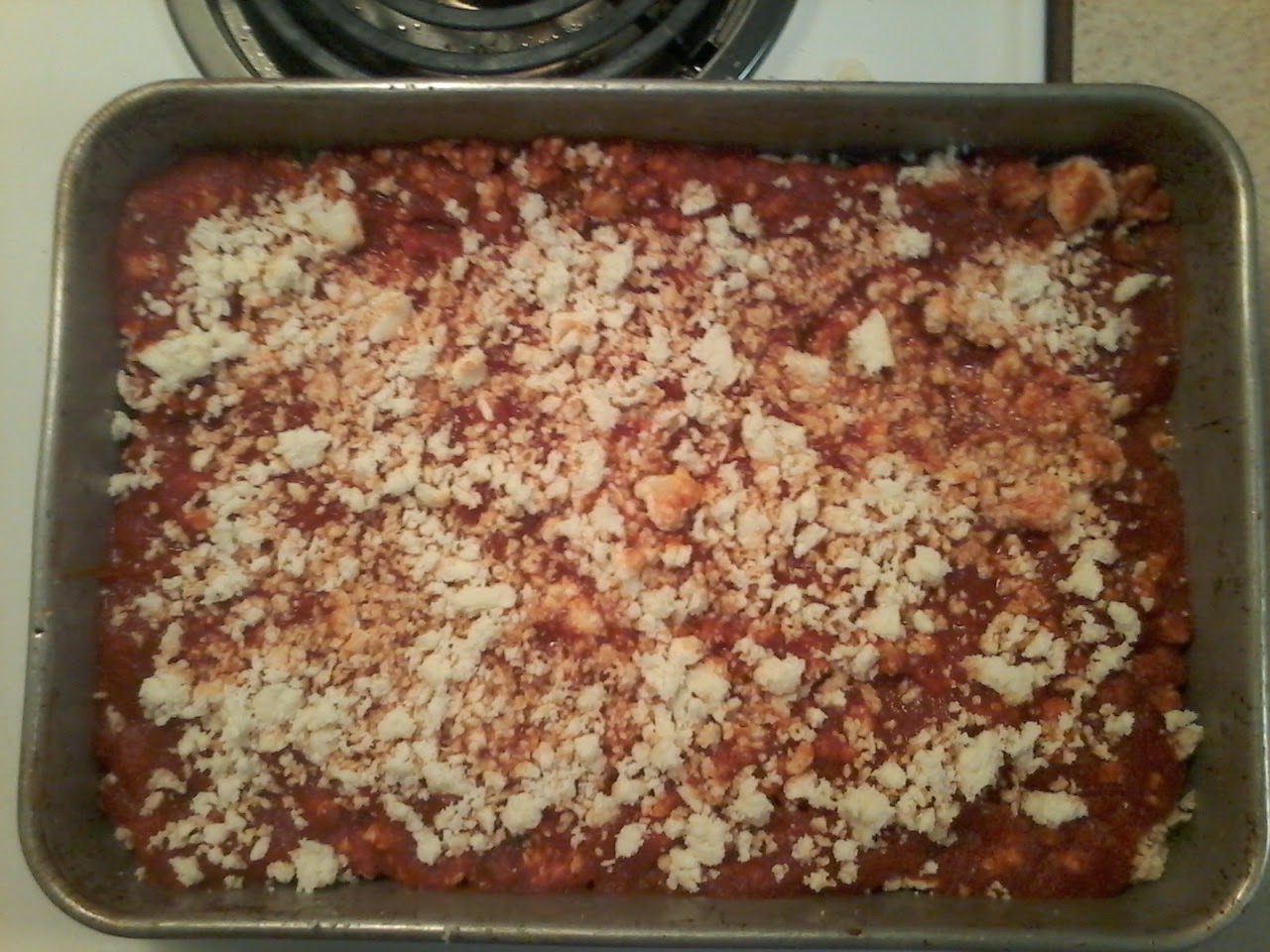 So now, I get to put it in the oven and putz around the kitchen, secretly pleased that one simply doesn't leave supper unattended to pack.
Yeah, the handle fell off on one side so the glass fell out. I'm really bummed about this oven going out- I made the first thing in it when it was installed (it replaced a ceramic-topped one after someone cracked the burners). It was a batch of Nutella brownies. It seemed oddly symbolic it should fall apart as I was moving out-- then again, maybe it was just rotten luck as my engine started misfiring the same day.
We're getting closer to the city now- there's less farmhouses with stables and other outbuildings and more fancy houses with no signs of any crops or livestock on the property. If I was spending that much on a place in the country I'd set it somewhere besides right on the Interstate, but maybe they want all the drivers-by to behold how much money they threw at their house.
It was really runny. I left it in for an extra half hour after the top was really melted before giving up.
But you know what? There's a lot of semi-trucks from Ontario for some reason. I was really hungry, and this isn't the first time I've dealt with runny suppers. 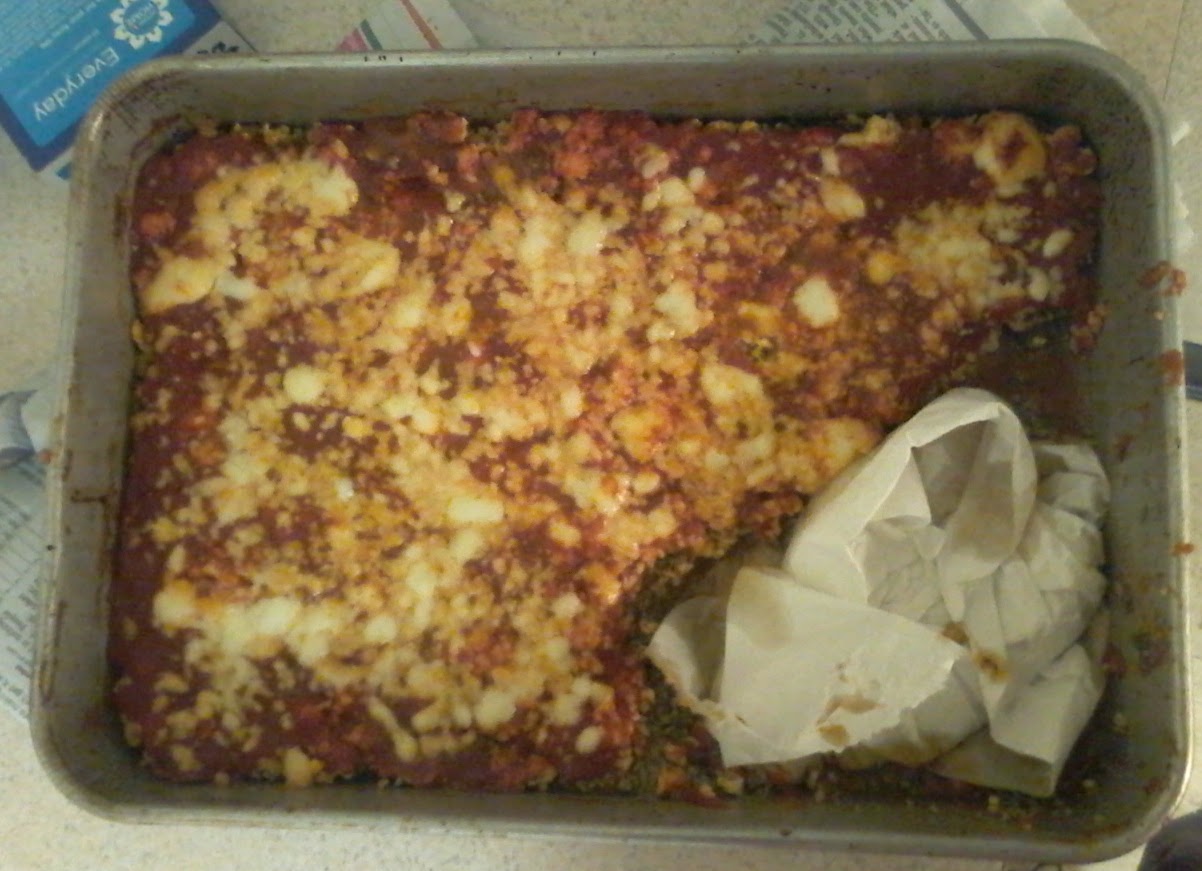 And here it is on a plate after I sopped up what dribbled out after I served it. 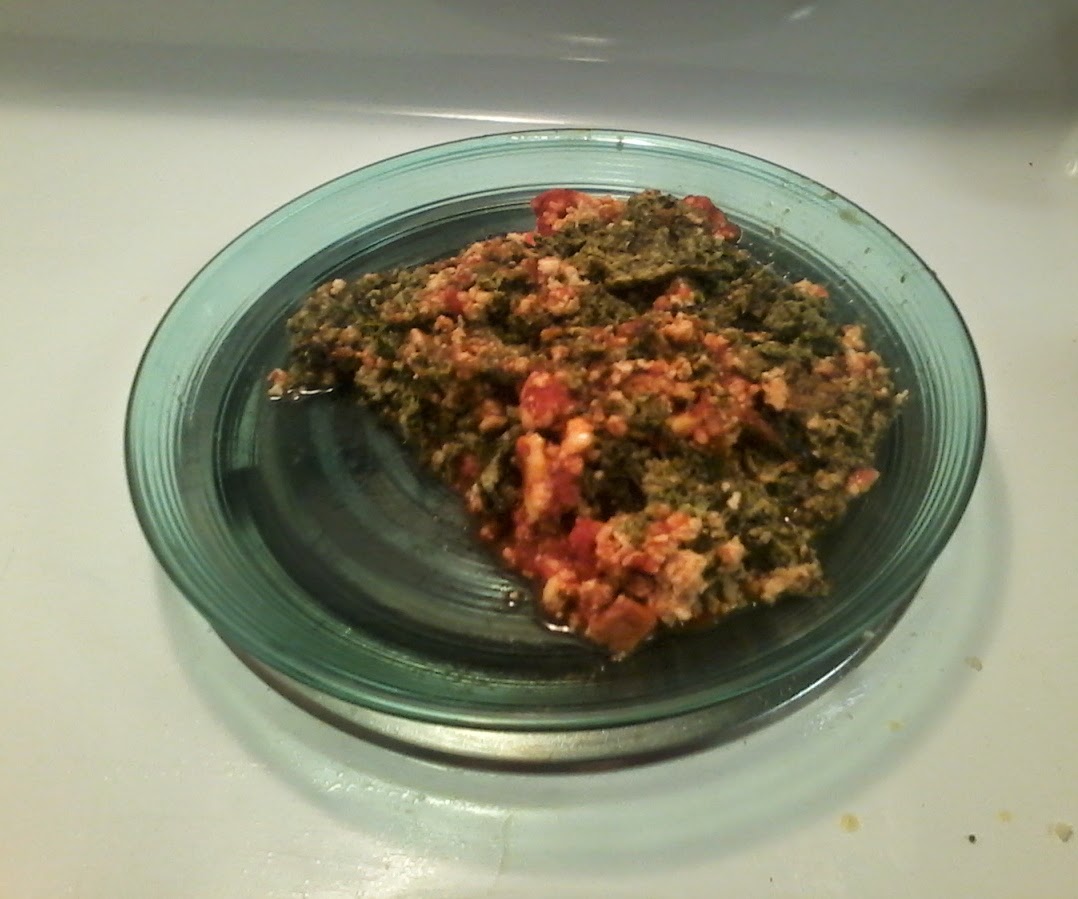 Someone's driving their car while sitting Indian-style in the seat.
I've usually just had supper standing in the kitchen, but as this was my last one to make in the dorm, I decided to set up at a table like a civilized person. Some car with California plates is abandoned in a ditch. In Texas.
Well, it looks ugly, but it was really tasty. It had kind of firmed up by the time I got seconds so it looked kind of layered: 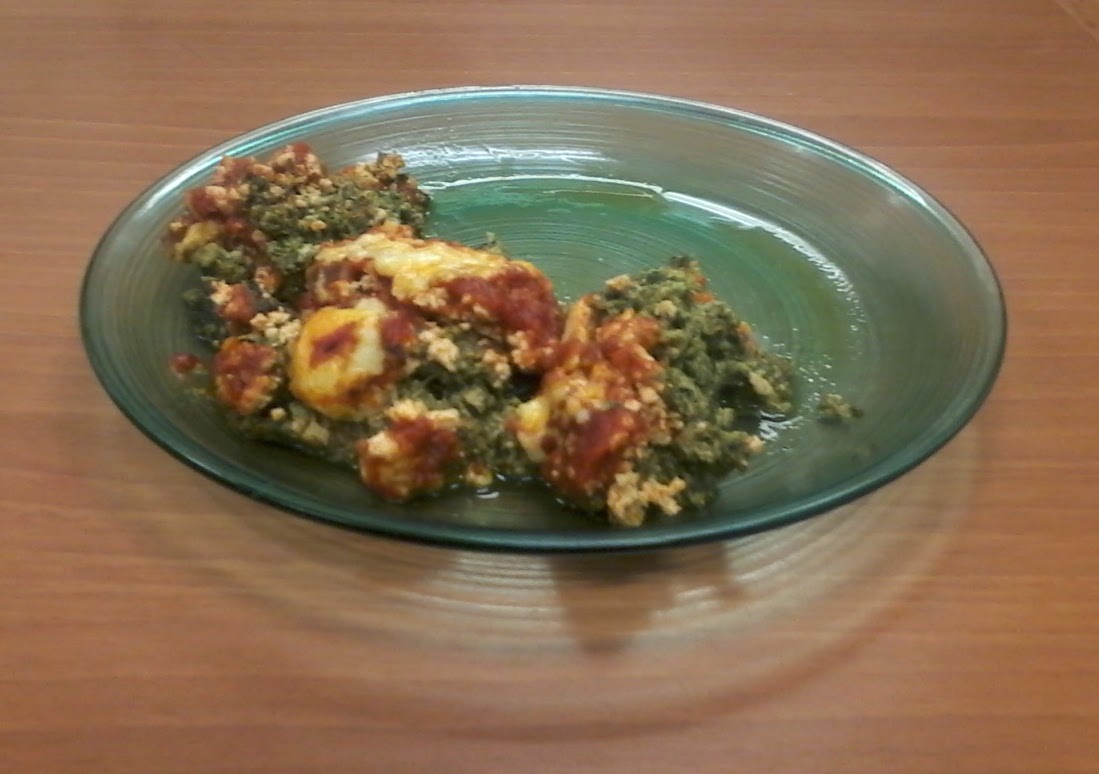 And by that afternoon it had really set nicely. Also, someone left out paper plates so I didn't have to wash mine!