Cream of Strawberry Pie: You're welcome!

We at A Book of Cookrye would like to present a backup recipe! When we made the pudding boiled in a T-shirt, we thought it unwise to have guests over and serve them such a thing and have nothing with a better guarantee of deliciousness. And so, we found this!

Scans like that make one appreciate digital scanners over microfiche, don't they?
I must admit that out of personal prejudice, I was wary of making a recipe from a Los Angeles book. I mean, that's the town that gave us Michael Bay and traffic jams. Is it wise to eat like they do? Would I feel a sudden urge to turn my hair blonde and get my teeth whitened?


The original recipe says "A most delicious pie and easily and quickly prepared." Given that early-1900's cooks had much lower standards for an easy recipe, would we in the next millennium still think it was either quick or easy? (Side note: the only reason I can spell millennium on the first attempt is because I had to do a paper on modern intellectual property law and the DMCA came up a lot in the last third of it.)

So far, the recipe's claim that it was easy was correct. Look at our spectacularly un-torn pie crust! 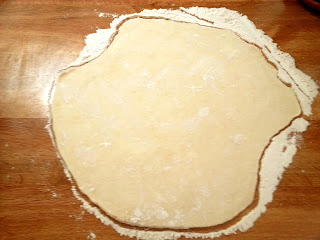 No, really look at it. 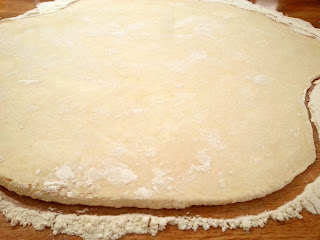 I'm beginning to think my biggest mistake in pie crusts all this time was using shortening. For reasons I cannot define, the ones I make from butter never end up being patch jobs. Look at it! It didn't fall apart, not even when I attempted to decoratively notch it! 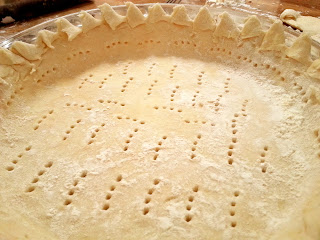 However, before I let myself get too proud of my pie abilities, I should point out that I didn't anchor it over the pan, causing it to collapse while baking.

I like how the recipe makes use of the scraps you were going to throw away. Since we weren't too obsessed with perfectly-shaped pie ornamentation, we just cut up what fell off the pie pan from trimming the crust. 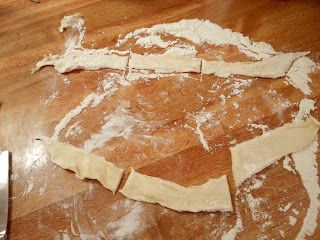 Since it's not so cold out that we wanted the extra heat, we baked the crust strips and the pie crust at the same time. However, we discovered that not only did the strips bake faster, but the ones that weren't directly under the pie pan (which were in the back of the oven where we wouldn't notice them) were a bit well-done by the time the rest were baked. 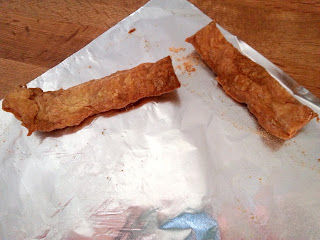 Enough crust. Let's move on to putting the strawberries and the cream into the cream of strawberry pie!

Having taken the liberty of eating some of them, I felt kind of bad turning these strawberries into a pulp. They were really good. Like, the kind you would just put in a bowl and serve out because they don't need any help. 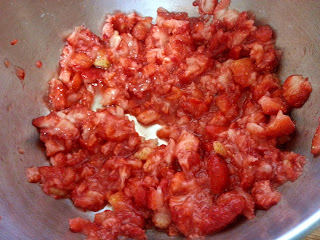 In-season strawberries are a cheap rarity. There are so many of them for maybe three weeks that the grocery can barely give them away fast enough, then suddenly they're gone. Since recipes like this don't cover up the bitter and bland taste of out-of-season ones, this would only be "a most delicious pie" (original recipe's words) for a short time of the year. 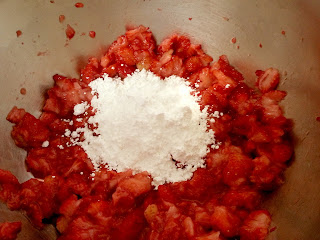 I wasn't sure why the recipe said to cover the strawberry pulp until gnats started orbiting the bowl. 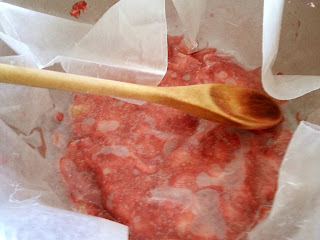 And now, the super decadent part of this recipe! This isn't just whipped cream, this is vanilla whipped cream!

You know this pie's going to be good when you get to say "And now we add the fresh strawberries to the vanilla whipped cream." 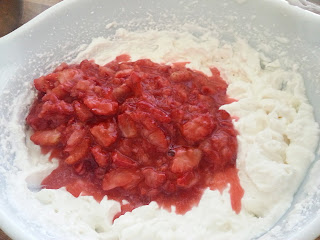 As a minor detour, the strawberry juice that stuck to the waxed paper that had covered it was utterly delicious. 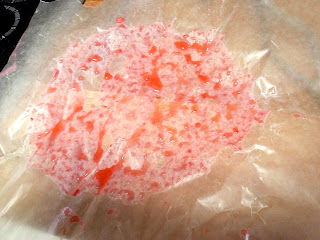 All right, let's have a look at the beautiful filling of fresh strawberries and vanilla whipped cream ready to go into the pie pan!

And now, the pie was ready to go into the crust! Which... doesn't look quite as bad as we thought it would when we watched it bake. Heck, most of those little folded-down triangles managed to puff out a little. 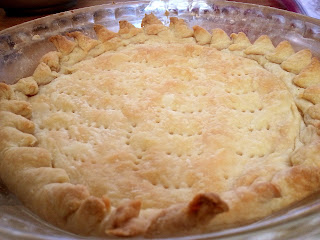 What was the point of putting it in a pie? Sure, there was absolutely nothing in this that could possibly make it taste bad, but it was just whipped goop.  On the hopes that spending time in the refrigerator like the recipe says would somehow cause it to set, we covered it and let it get cold. 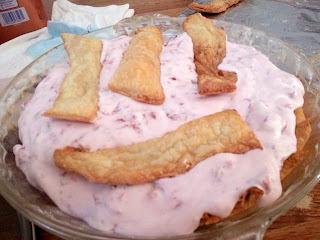 Would you like to see how nice and easily-sliced it turned after chilling for an hour or two?

It's a pretty shade of pink and all, but this pie does not look good on a plate. The sad heap of pink goopiness looks like those cheap from-a-box pudding mixes that may or may not contain actual fruit. 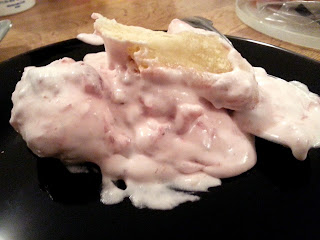 However, as we repeatedly told ourselves as we made it, there's absolutely nothing in this pie that can possibly make it taste bad. Even describing the recipe makes it sound divoon: "You put fresh strawberries into vanilla whipped cream." And indeed, it was really good. It tastes like a not-fake version of strawberry yogurt. And, as the recipe claims, it really was quick and easy. But, there's one thing we have in the 21st century that makes this pie perfect: a freezer.