Have I ever mentioned how much I like Fanny Cradock? In all her overdressed, drag-queen makeup, suspiciously deep smoker's voice splendor, Fanny Cradock and her ever-disapproving ways are a spectacle I am so glad is preserved for posterity and available on YouTube. I feel an odd connection with the drag queen who terrified everyone in the kitchen with her and then produced some very questionable food with excessive amounts of food coloring. I even send her likeness to friends without warning.

Today, we at A Book of Cookrye would like to delve into the recipes of Her Not-So-Serene Highness, Fanny Cradock! Also, we are going to prevent the waste of these potatoes. 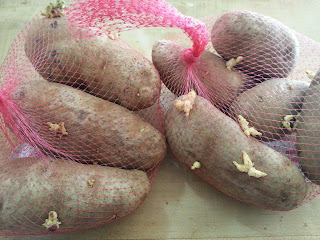 Sure, they were kind of soft, sprouting new plants, and about a week from turning to mush, but no one who's near-perpetually broke would throw them out. When faced with throwing out food, we at A Book of Cookrye indignantly say...

What might we be making of these potatoes, you ask? We could have mashed them, we could have made latkes, we could have just baked them. But we at A Book of Cookrye decided to FRY THAT SHIT! There's not a thing in the world that frying doesn't make edible.

The relevant part of the video's at 9:57, but you should watch the whole thing.


In this lovely piece of British history, Fanny Cradock appears in some beleaguered, inexperienced housewife's dream. Her husband's been nagging her for her terrible cooking (quick semantic question: if a man with a nagging wife is henpecked, is she cockpecked?). When she randomly faints in the living room, Fanny Cradock appears like the nagging kitchen fairy to make her feel guilty every time she doesn't know how to make anything. Look at Fanny's reaction to our heroine when she doesn't know how to fry potatoes the Fanny Cradock-approved way.

Jesus, Fanny! You don't just have her embarrassed for not knowing how to fry potatoes, she's bracing for when you grab that ornamental cactus in the background and perforate her face!
And just what does Fanny Cradock say we should do when frying potatoes? Fry them twice!

It was easy to cut the potatoes up, especially since we decided to forget about peeling them or cutting them into tiny slivers. However, we had difficulty finding sufficient vessels to store the cut pieces in.

An involved discussion occurred in Marcus' kitchen- did we really want to fry all of these? Like, all of them? The answer, of course, was a resounding yes!

At this point, we must say that even though (based on the test we did with a raw potato) we had the oil just as hot as Fanny Cradock and her unfortunate housewife pupil did in the film, these potatoes were not nearly done in the four and a half minutes Fanny said it'd take. Granted, the film is set in a dream where everything works out better than our dismal reality, but these had to fry for about ten minutes. 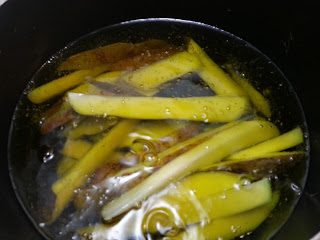 Such a long frying time doesn't seem so bad at first, but check out the size of the pot we're frying them in. See how small it is? We had a lot of batches that needed to fry for ten minutes each.

All right, now it's time to do the second, crisping fry! Fanny Cradock may have had two oil vats side by side, but the most oil Marcus and I came up with was three quarters of a bottle and a small saucepan. Therefore, we and the fries had to wait while the oil heated up.

Did Fanny Cradock have leather hands? We got grease spatters all over ours while holding that fricken potato piece in there! We then realized that while just dropping the potatoes into the oil and fishing them out with tongs may have worked just fine when the oil wasn't so hot, we would probably get grease burns all over our fingers from not having a frying basket with a very long handle. Did we really want fries that badly?

In Fanny's kitchen dreams, the fries took a minute and a half to turn really brown. And indeed, the fries were nice and crisp on the outside in ninety seconds- you could hear them knocking into each other. But we at A Book of Cookrye wanted them really fricken brown, just like Fanny Cradock did on TV.

First, what does Marcus think? Did we successfully turn some near-rancid potatoes into a successful (if not heart-attack inducing) delicious avoidance of waste? 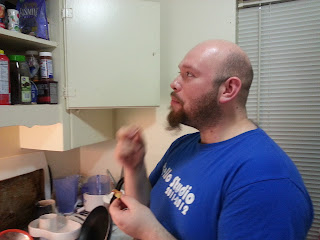 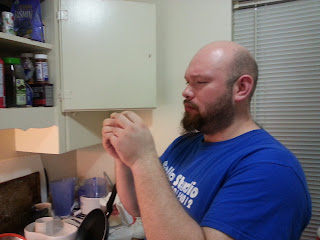 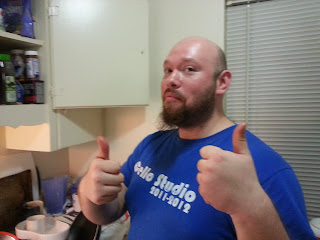 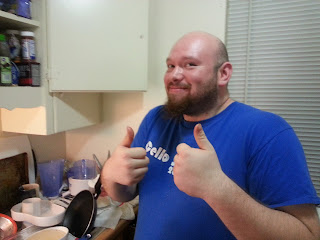 On that enthusiastic note, I tried them for myself. Would all that time I spent waiting to put another handful of potato sticks into the frying pot be worth it? 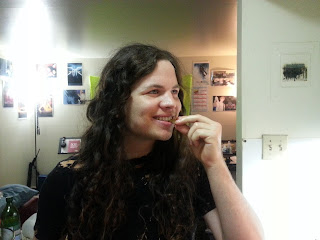 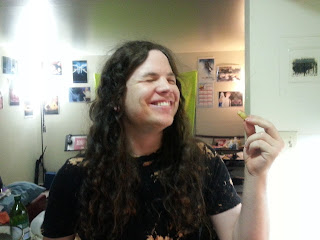 REALLY would! Do this yourself! 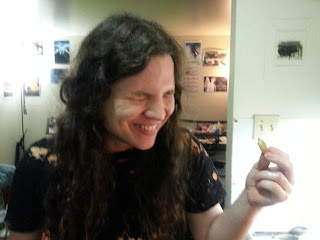 These were still good after they'd gone cold. When we asked ourselves if we'd learned anything, Marcus said "Creepy old British ladies are awesome!"
We at A Book of Cookrye would like to salute Fanny Cradock! May her disapproving gaze be ever upon us! 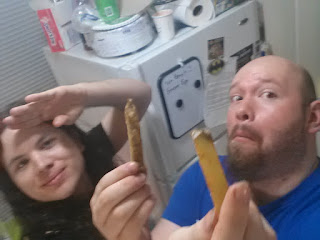