As was previously mentioned, we at A Book of Cookrye previously braved the hazards of shopping in broad daylight to get an ice cream maker. There were howling children in the distant aisles (No, really. I think they were playing wolves.), dreadful lines, and angry scowling people bitterly trolling the parking lot for up to a quarter hour so they wouldn't have to walk 5 minutes across the parking lot. Our excuse was that without it, we couldn't prevent the waste of the squishy fruit lurking in the refrigerator. And in our defense, we really had been craving water ice since we left Philly, so our excuse wasn't complete fiction. However, we've also been wanting to make delicious things like... this!

We at A Book of Cookrye have found promotional recipes to be very hit-or-miss. But condensed milk is so delicious we could just eat the stuff out of the can. (You may think that's exaggeration, but that's because you didn't see me when I was on a post-wisdom-tooth-removal liquid diet.) And so, an entire handout of condensed milk recipes can't possibly muck up an ice cream recipe.

The original recipe had long, complicated instructions for sanitizing and pre-chilling the ice cream freezer, but we at A Book of Cookrye realized that we could skip all that, dump everything in the can, and stir.

And so, after some more quick dumping in of stuff and a brief moment of stirring, we had the ice cream in the freezer and everything below photographed to clean. 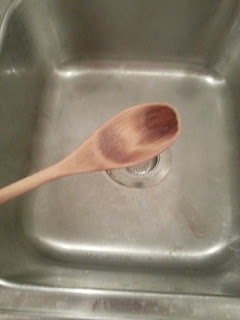 I'm not kidding. Literally the only thing we measured for the entire recipe was water, and only a damn fool gets out the soap and washes a cup that was only used for water. So, we got out the bowl we were planning to freeze the ice cream in and a lot of Oreos.

However, I must air a grievance at the food industry. You know how a lot of people have pointed out that food manufacturers have been shrinking packaging without also shrinking the prices? The recipe said to use a 15-oz can of condensed milk, but every can in the store was this size instead.

Meanwhile, this is when you feel grateful you bought an ice cream maker. Please, look at this. That runny goop has turned into... this!

As a recipe note, if you're removing it to a bowl instead of refreezing it in the can, you may want to get someone else to hold the can while you scrape out the ice cream. And said person should probably grab a folded-up rag to hold it rather than freeze their hands. You can thank said person for their assistance by doing a deliberately bad job of getting all the ice cream out of the can (besides, every second you spend fussing over the last lingering ice cream you didn't scrape out is a second the whole batch of ice cream is melting) and letting them eat what remains.

Meanwhile, we set about turning this ice cream into cookies and cream. Because... because I need no excuse, so there. 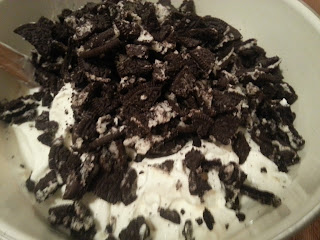 You know how if you don't freeze ice cream a second time once it's done churning it melts just about instantly? You can see that at the edge of the bowl as I stirred in the cookie pieces.

This ice cream was amazing. Also, it didn't have to sit out and soften when we finally got it out and and served it. It almost feels like cheating since it was such a cinch to make (all we did was stir things together and put it in an ice cream machine), but this really is fantastic. Since the summer heat really does show no sign of granting respite, you should totally spend thirty seconds stirring cream and condensed milk together and then putting it through an ice cream freezer. You'll be glad you did. 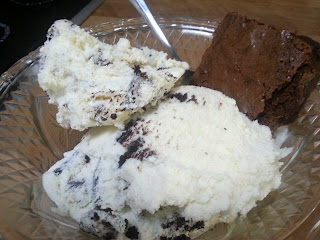