Mushroom Ketchup!: or, I always wondered if it would be any good

You know those recipes you have kinda always wondered about but never made? Well, we at A Book of Cookrye are about to make one happen!

Look at that- mushroom ketchup! Did you know that apparently you can get ketchup in non-tomato flavors? What the heck is this?


As much as I was dying to know how the heck ketchup can exist without tomatoes in it, we never could find out because it turns out mushrooms are kinda really expensive. Or so I thought. Behold! 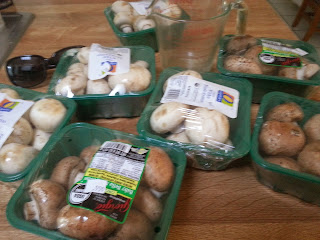 We at A Book of Cookrye would like to sing the praises of the unclaimed freight grocery store. Yes, you have to check the date on everything, and there's a good chance you'll get home to open a package to find rancid food waiting,  but sometimes they have things like this. I grabbed all of these because how often are mushrooms cheap? I may not get a chance to make this again for many years! 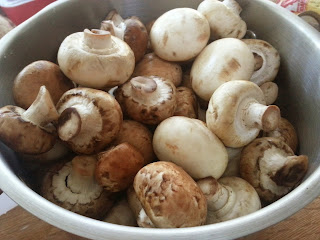 Miss Leslie specified a "deep earthen pan," but these are so many mushrooms I didn't have a big enough pan for them. How often have you seen a whole stewpot of mushrooms that didn't come with a frightening grocery bill?

Now came the difficult part: we're next supposed to put the mushrooms either near the fire or in "a very cool oven" not just overnight but for a full day. Miss Leslie doesn't say anything like "overnight" or "until the next day," she says "Let it  remain thus for twenty-four hours." (emphasis mine). This is a good time as any for two handy recipe hints. First, do not undertake this if you share the oven with anyone else unless you've expressly cleared that no one will want to use it for anything at all including reheating the garlic bread they were going to have with the spaghetti they're making. Second, if you have an open kitchen and therefore cannot close the doors to contain the heat, wait for a cold day. This second one does not apply if no one in your domicile cares about the electric bill. 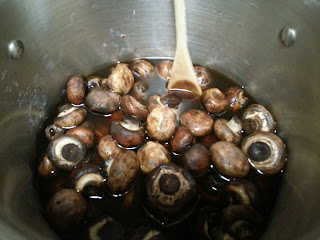 Lookit how much the mushrooms shrank! They don't even cover the business end of my wooden spoon!

Miss Leslie may have mashed these with her hands, but in this century, a stick blender will be brought in as a substitute. Cheap mushrooms are so rare I wanted to be sure I'd squeezed every last drop I possibly could out of them. 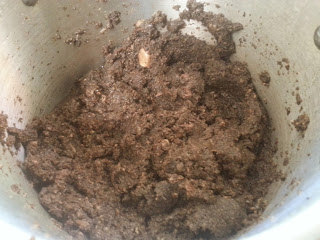 And so, we came upon what must be a familiar sight to anyone who dredges up recipes from before electricity: perfectly innocent ingredients reduced to a paste and about to be squeezed dry. 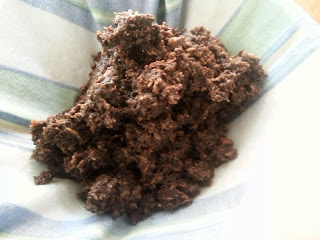 We've ended up wringing fruits, tomatoes, and now mushrooms through rags. It seems squeezing all the juice you possibly could out of fruits, vegetables, and occasionally meats was so common I'm astonished the power juicer didn't take off until we invented the fad diet. Do you have any idea how much hand strength it takes to squeeze a large batch of stuff until it's completely dried out? I would love to see statistics on how many women choked their husbands to death before electricity.

At this point I must say I was very surprised at how much juice came out of the mushrooms. It barely fits in the pot!

This recipe may have started with a 24-hour waiting period and then had a very messy 45 minutes of squeezing rags full of mushroom paste, but once it got on the stove, it cooked pretty quick.
Also, there just happened to still be ginger in the freezer from Christmas. I couldn't slice it frozen, but the cheese grater worked. 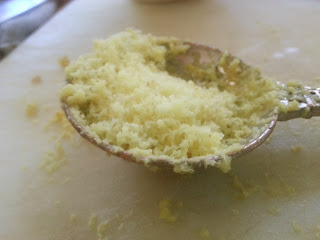 Look at it! It's frozen ginger snow! You know what, that's so pretty to behold, let's look at it again.

I checked this recipe a lot of times, and it seems like we are indeed supposed to more or less flavor the mushroom ketchup with pumpkin spice.


Right up until the pumpkin spice went in (and this is a lot of pumpkin spice for one pot of stuff), this tasted like delicious salty mushroom broth. You could have added whatever you wanted and it would be amazing, delicious soup. Now it was unrelentingly... pungent.

Furthermore, this is what remained in the pot. Doesn't it make even the most apathetic person want to rush out and make a batch of mushroom ketchup for themselves? Or does it just remind you of that time you thought a rabbit would make an awesome pet?

On first taste, this was some of the most pungent sauce I've ever made. I was convinced I'd wasted all of those mushrooms and a lot of time. But out of curiosity, I added a small amount to a batch of spaghetti squash minestrone to see if, like vanilla extract, mushroom ketchup tastes vile out of the bottle and very nice once heavily diluted. It turns out that a relatively small amount (about a quarter cup for a very big pot) makes the whole soup really mushroomy. In retrospect, making sauces that you use in such small amounts makes more sense when you realize how much work this recipe would have been in 1837 when the cookbook was published. Would you want to spend all that time lighting woodfires and hand-scouring everything for a sauce that hardly lasted at all?
In short, it's concentrated mushroom flavor in a sauce bottle. If you like mushrooms and culinary projects, you'd love it.
Posted by S. S. at 12:30 AM