Italian Dinner: or, I guess this passed for Italian in the Jazz Age

Edit: An anonymous commenter has pointed out that, contrary to my frequent jabs at how barely-Italian this Italian recipe is, this is in fact a rather competent recipe for what (depending on where you are) is either called braciola or involtini.

Today's recipe starts with bleach. You see, the refrigerator has been incubating various molds and things in its back crevices, and we at A Book of Cookrye decided that we might consider giving it its once-per-decade scouring. The growths were worse than anticipated, and rather than just briefly wiping the shelves down, we ended up pushing it out onto the driveway and having at it with a garden hose and a spray bottle of Clorox.


As a general book note, The Woman's Club of Fort Worth Cook Book is really fascinating to anyone who is into old recipes. It shows us what food looked like for ordinary people (as opposed to the extremely wealthy people whose private chefs make history books) in a city that's not New York or Los Angeles during that brief period when the food industry really took off but before the Depression hit. The recipes make extensive use of things like canned vegetables (where people just a generation earlier would have had to preserve their own produce or wait for things to be in season). However, pre-made things had not yet become prevalent. It would be another few decades before you saw things like casseroles topped with unrolled canned croissants.
Back to today's perpetration, while emptying the refrigerator in preparation for its forceful cleaning, we found this buried in the back of the freezer: 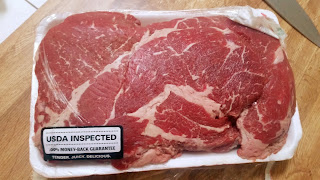 Yes indeed, a huge beef slab was purchased on discount and frozen for some undefined future use. And that use will be an allegedly Italian dinner! We decided to hack off the top half inch or so (since the recipe says a half-inch steak) and hope whoever got out the rest of it didn't mind having a flat-top roast.
Rather than completely thaw it, shave off the top, and refreeze the rest, we decided it would be best to defrost it as little as possible so the unused part of it didn't taste like it had been repeatedly refrozen. While the outside of it was just thawed enough to slice through, the center of it had a rock-solid core of ice.

After probably taking the edge completely off the knife, we had a thin slab of beef to transform into an Italian delight, and a much larger frozen beef rock to try to prevent from thawing while the freezer sat outside drying. 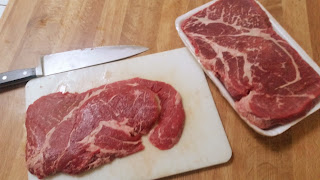 So obviously, this wouldn't pass for Italian today. However, just because it's inauthentic doesn't mean it's bad. It's hard to see how a recipe that starts with covering meat with garlic and ends with spaghetti could possibly go badly.

I thought I might save time by putting all the garlic cloves in an egg slicer. However, as seen below, the slicer wires got about halfway through the garlic and gave up. This made us wonder why an egg slicer is even in the kitchen. It turned up in a drawer, still in the original packaging that appeared to be several years old (which says all you need to know about how often it's been used). Egg slicers apparently also confounded Terry Pratchett, who briefly detoured from the plot in Wintersmith to point out that everyone has an egg slicer, no one knows why, and that no one has ever knowingly gone out and bought one.

As you behold the thorough garlic coverage on the meat, I should probably tell you that I found out through a mutual friend that my ex is still traumatized by excessive use of garlic four years later.

We did actually learn how to properly truss meat in cooking school. And as anyone with sense may surmise, this ain't the right way. But at least I didn't wrap it so tight that it had weird bulges everywhere. Also, while I expected to have to poke and shove half the garlic back in there after rolling the meat up, nearly nothing fell out.

You should know that nearly every step in the recipe from here forward left hard-to-scrape-off deposits of stuff on the counter. Dusting the meat with flour left a paste of flour and raw meat juice all over the cutting board that hardened in minutes. And it turns out errant splats of tomato paste will glue themselves to whatever they land on and leave a red stain that will not come out. You may want to fill the sink with water so you can drop things into it for soaking and have a wet rag on hand to swipe at anything that lands on the counter. 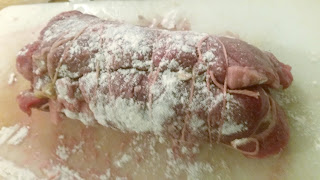 The recipe says to brown the meat in a skillet and then dump the meat and all the grease into a stewpot. I asked myself how much I wanted to wash both a pot and a frying pan and decided not to be so extravagant in the use of dishes. Also, I hope the suet grease wasn't supposed to add a critical flavor, because that's a special-order item these days. I used cooking oil instead. 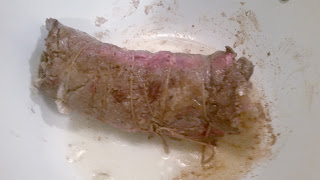 As it got surprisingly late, the sight of the meat acting as a tomato paste barricade was more amusing than it should have been. 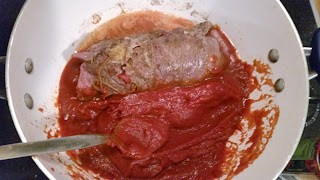 As I started adding water to this, it occurred to me that there would be a huge bucket of diluted tomato paste by the time I had the meat covered. The mere idea of having to find clever ways to recycle all that sauce was so bothersome (even it was nothing more than water and three cans of tomato paste which were not even imported even though the recipe said they should be) that I mashed the meat roll into a smaller pot just to reduce how much water was needed to cover it.
I will say this for doing pot roast (whether alleged to be Italian or not): the cooking time may seem endlessly long, but it's a great opportunity to not only clean up every stray splatter of raw meat juice in the kitchen, but also to take the dogs out, get groceries, do some housecleaning, and everything else you can think of to distract yourself from how long it's taking to stew and how you should have started this earlier instead of waiting until you were already hungry before starting a recipe that does not use the word microwave.

The Italian dinner may have unfortunately resembled a squishy brown log floating in the water, but surely it would look better when removed. Or so I hoped. 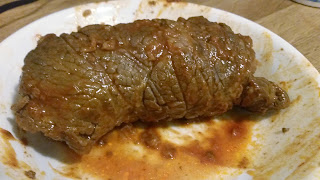 I had been hoping for some awesomely weird-looking jelly roll/meat hybrid slices to look unnervingly creepy, but the slice fell apart as I cut it off.

Oh wait. We forgot to sprinkle the plate with "imported Italian cheese." As it happens, some parmesan (imported from Wisconsin) lurked forgotten in the back of the refrigerator. (You may think that someone in the 1920s would have been restricted to those shelf-stable cheese granules, but apparently those didn't exist yet.) And so, by accident, we actually made this entire recipe more or less as originally written, with almost no substitutions at all!

And... this is good. Really good. The long boiling somehow removed the canned flavor from the tomato paste, and the bread somehow absorbed the garlic and turned into little concentrated nuggets of garlic-flavored bread stuffing.
This tastes about as Italian as you would expect a meat roll stewed in tomato paste to. Honestly, for a dinner, I'd ditch the spaghetti and the cheese, instead serving it with the usual things one eats with pot roast. With that said, I'd totally make it again. However, there was a lot of sauce with this. Anyone making this should be at least open to the idea of a pot of tomato-heavy soup because you will run out of meat long before you've used up all the sauce. Or, you might add a lot of vegetables toward the end of the cooking time and serve it up as a stew.

And so, we at A Book of Cookrye thank Mrs. M. A. Stainer and the Woman's Club of Fort Worth for a surprisingly delicious (if only barely Italian) pot roast! I had high expectations for a recipe that started with covering meat with garlic and ends with spaghetti, and this was still better than expected.
Posted by S. S. at 1:45 AM