Attempting zucchini bread in a blender

The joke about people in certain regions locking their cars in the summer to prevent people leaving zucchinis in the seat may be as old as the one about how there's only one fruitcake in the world which gets regifted every year, but for whatever reason, 3 of the little buggers materialized in the refrigerator! No one grows zucchinis near here, and their season has not yet arrived. And so, the blender was brought in to pulverize them and make... zucchini bread! 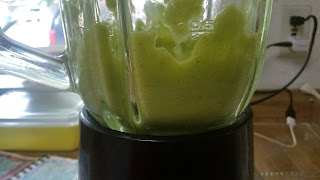 That's the zucchini in the blender, along with the egg to make it actually blend instead of sitting still while the blades spin under it. It first occurred to me that several people into juicing probably make a blenderful of zucchini and egg on purpose routinely. After that, I thought "Is there any reason one can't just do all the mixing in a blender?" And thus the voyage of discovery began! Reading down the ingredient list, the next thing to get pulverized was the butter. 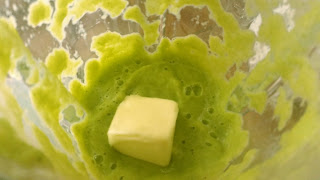 For the longest time, the butter refused to blenderize in. Instead, it made ever-more-minute butter worms that floated in the green. See all those lumps making everything look curdled? Those are the butter. 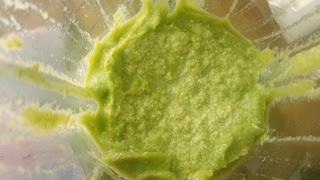 But if one runs the blender for long enough, the butter eventually stops looking like tiny little worms and actually mixes in. And now, let us bring on the sugar! 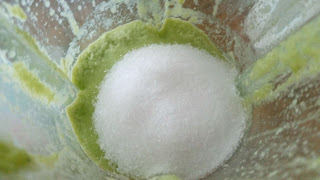 I have to admit, things were going great so far. The batter looked like a batter (instead of looking like something was going very wrong). And it actually tasted really good. Feeling happier than we should about zucchini bread, we dumped in the flour and set the blender to its slowest speed. 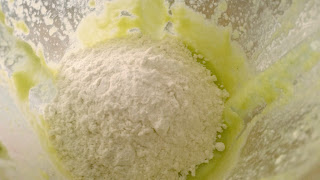 The flour formed isolated clumps that needed to be scraped away, but we still managed to have it all mixed in 45 seconds. Truly the blender is magical. 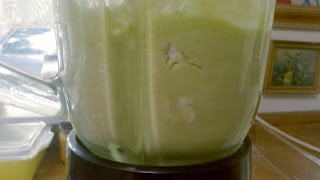 Further proof that the blender is magic: Check out how easy it is to pour cupcakes! If this is what I've been missing out on in the dark days before I owned a blender, would a food processor change my life? 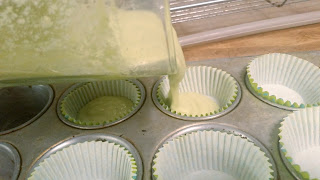 I can't tell you how excited I was that I had discovered this new, mess-free way to use the magic of small kitchen appliances to make baking a snap. Heck, the blender even cleaned itself. 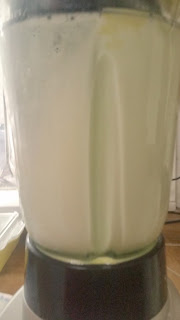 After an unusually long baking time, the zucchini muffins showed every sign of being done. The tops of them rose like perfect little green domes over the pan. When poked in the center, the probing implement came out nice and clean. They sprang back when pressed. Nevertheless, they looked like this within 10 minutes of leaving the oven. 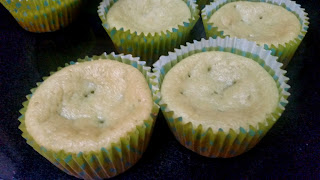 All right, let's cut these open and see how bad an idea this was. 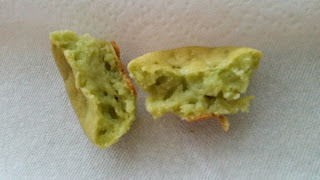 As you can see, the outside is almost bread-like,  but the inside is this core of paste. Ordinarily, this is a sign that I took them out of the oven too early. And I agree, it really looks like it. But I promise, they were completely baked through.
I think the big difference is that the zucchini was thoroughly blenderized to a paste. Last time, it was finely chopped, but still recognizable: 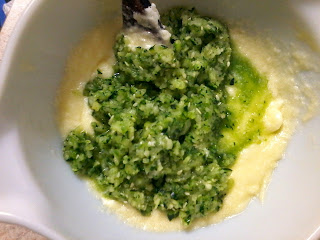 That batch of zucchini bread was really lovely. But this was the same sort of disappointing paste one gets with lousy carrot cake recipes or when trying internet-endorsed vegan egg substitutes. And for the record, you should not be able to make a cake do this. 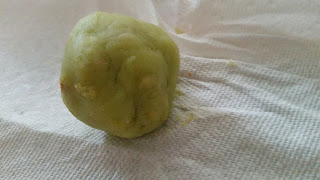