Today, we present recipes from comment sections! Below an article about how many treasured family recipes began their hand-me-down journeys in decades-ago food advertisements, someone noted a particular favorite:

I'm a little surprised that I didn't find this on Pillsbury's website. While I didn't think they'd put every recipe ever to go into the Bake-Off online, surely they would post the prize winners from the years. But even though Pillsbury doesn't have the recipe anymore, it appears someone does, and that person scanned it.

We decided that we needed to bring it about in our kitchen. However, this recipe makes a lot of orange-butter coffee cake, so we're cutting it in half.

Because the Internet told me to (see the screen-shotted comment at the top of today's adventure), we are replacing all of the fresh oranges with juice concentrate. I've done this before, and honestly I think it works better in baking than actual orange juice you squeezed yourself. The concentrate has a much more, um, concentrated flavor--- and that comes in handy when you dilute 4 spoonfuls of it with a large amount of cake batter. Also, there has been no pandemic-induced price spike in juice concentrates. It seems like no one buys them anymore; they rest forgotten in the back corner of the grocery freezers like the two or three turkeys that sit unpurchased for months when it's not Thanksgiving or Christmas. 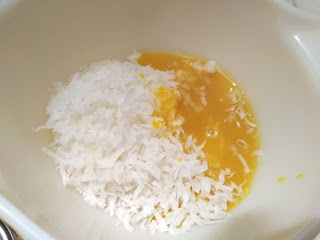 And so, we get this recipe started with coconut in a lot of orange concentrate. I dipped a teaspoon into the juice can to sample what we're adding to this, and it tasted exactly like the orange "juice" that they set out at many a grade-school classroom party. 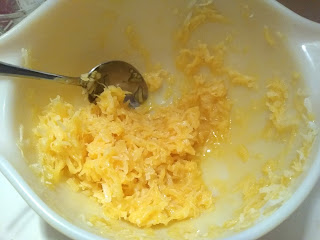 As aforementioned, this recipe made its way to us in a discussion of how a lot of treasured family recipes come from now-tattered (or sometimes permanently misplaced) advertisements and handouts with a few small tweaks through the decades. It reminds me of a recipe I got from a friend for a "strawberry pretzel salad" (it's really a dessert) with a note that it started out as a recipe that her grandmother cut off of a Jello box. 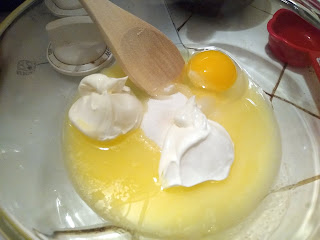 If we temporarily ignore the orange and coconut, we find that we're just making bread. Although, (with apologies to Fornax, the Roman goddess of the oven) we are using that modern scientific marvel of packet yeast. It replaces sourdough with certainty. 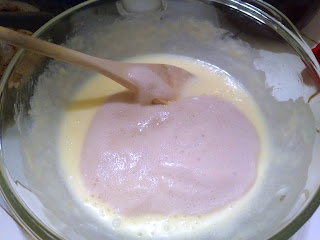 While raw bread dough usually tastes bland and gummy, this was already really good. It reminded me of those yeast-raised cakes from What Mrs. Fisher Knows about Old Southern Cooking. I know this bread is slated to be drenched in orange and coconut, but I think it'd be good enough to eat on its own.

At first, it appeared that the recipe used far too much flour for everything meant to go into it, and I suspected I was going to have to pass off hard crumbly bread things as a cake. You can't even see all the other things under that white cloud. 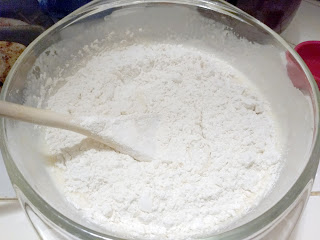 You can slap this recipe together a lot faster than the long instructions may make it look. Aside from the short delay when we made sure the yeast had fizzy life in it, we had this put together in just a few minutes. I saw the long page of typewritten instructions and thought this would be an elaborate kitchen production, but we were ready to roll out the dough before I realized it. 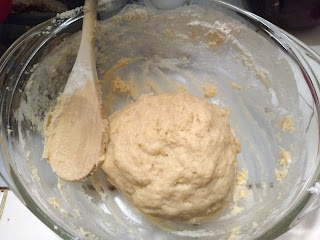 When we doubled the coconut in this recipe (as per the suggestion we found), we imagined that this would look like a pizza-in-progress after you've covered it with way too much shredded cheese. Reality proved a bit of a disappointment, as all of the coconut (and we used a lot of it) was only enough to make a light smattering across the vast expanse of dough. You may think that I rolled the dough too big and therefore had to spread the coconut too thin, but in the name of recipe accuracy I got out a ruler and made sure that we had the 12-inch circle the recipe tells us to make. 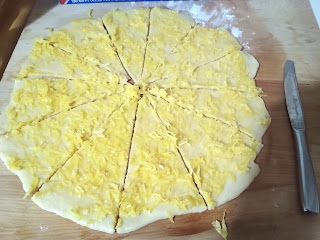 Those of you trying this at home (and I highly recommend that you do) should know that this dough will try to glue itself to the countertop as you roll it out. If, during your quality time with a rolling pin, you should find that the dough has even the slightest hesitation from lifting off the counter, put an excessive amount of flour under the offending sticky spot. Otherwise this will happen. 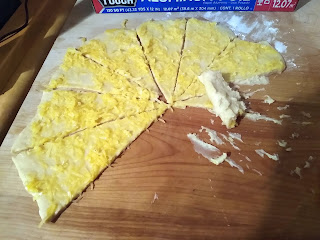 Most of them lifted off with reasonable ease, but you can see some of them ended up looking more like sticky blobs than orange-coconut roll-ups. I put the worst one in the center- it was so misshapen that it was no aesthetic loss to just squish it until it fit. 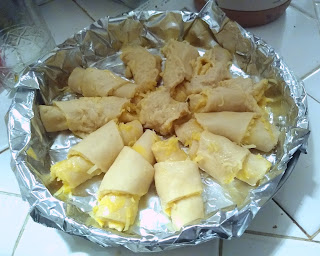 Using what we learned when making sourdough bread, we turned the oven in a lovely yeast-rising habitat by boiling a large pot of water and putting it in the oven to radiate all its retained heat. All of the steam meant we didn't have to cover the bread while it rose; the air was too humid to dry it out. Therefore, we didn't have to worry about the bread dough trying to stick to said plastic wrap.

However, even in the best of yeast incubators, this bread took a long time to rise. If you're making this at home, just set it in the cozy bread-raising nest of your choice and forget about it. Go out of the house if you're vaccinated and catch up on errands. See if the price of toilet paper has come back to normal. Or, stay in with a nice cup of tea and a cozy book (or, more realistically, tea and the television show of your choice). If you forget about this and leave it to rise for far longer than you think you should, your patience will reward you with this glorious pan of orange-perfumed fluffiness. 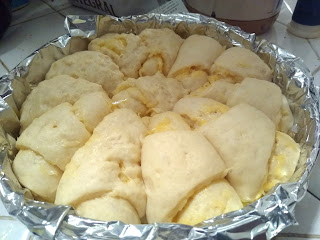 Here I want to note that I made two revisions that-- well, I won't say I regret, but I will say they improved nothing. The first change: I thought to myself "Why merely sprinkle the coconut on top? That is such an afterthought! The coconut should be part of this delicious creation, not something dumped over it at the last minute to make it pretty! It would be so much better if we stirred the coconut into that glaze and let it meld and boil into a coconut-citrus happiness!" The coconut disappeared instead. 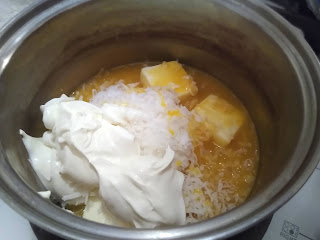 Look at that massive mound of white shreds, and then see if you'd guess that more than a spoonful of coconut was in this final orange stuff if you didn't already know. I didn't mind the coconut becoming invisible, but you could also barely taste it. My brilliant creativity had made the coconut pointless. 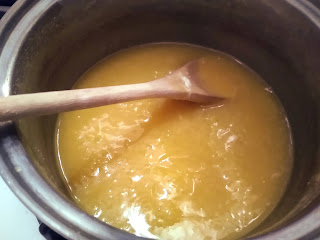 The second revision that I should not have done (which I corrected in the typed recipe) was much easier to fix. When I cut the recipe in half, I left the glaze in its original quantity (effectively doubling it relative to how much cake it would be poured over), thinking that we'd just have extra saucy rolls.

But I poured about half of the glaze on (viz. the amount I should have made in the first place) and stopped because that it was plenty. Pouring the rest would make the rolls into a hot orange swamp. Fortunately, making too much glaze was an easy mistake to correct: just don't pour the other half of it on. It looks like an orange swimming pool for buns because this glaze was surprisingly opaque, but this is about as much as you'd put on cinnamon rolls if it was white icing. 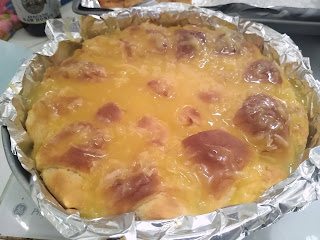 At this point, I thought maybe Mrs. Lawrence Hoerig of Mequon, Wisconsin might know better than I do about correct coconut placement in the recipe. After all, she won $5,000 (which the inflation calculator tells me is about $43,000 in 2021) when she put the coconut on top instead of in the glaze. 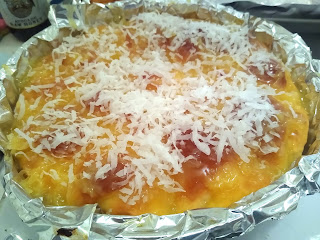 You might think that you cut this thing more or less along the divisions between the little rolled-up buns, but they melded into one big cake. We couldn't tell where one roll stopped and its neighbor started, so we just cut out pieces of whatever size we wanted. 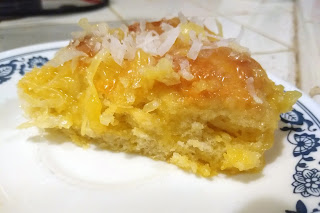 With that said, this is absolutely amazing. Of course, the sticky orange glaze and coconut on top were delicious, but I wanted to make sure the bread was actually good without it. After all, why spend all that time making all those little buns if they're nothing but bland vehicles for shoveling orange icing into your cake hole? When I carefully scooped out some glaze-free bread from underneath, it tasted delicious. It had just a delicate hint of orange flavor from the filling rolled into it, and a surprisingly strong coconut taste given how relatively little was in it. But even without that, the bread itself is really good. It's marvelously soft, and so delicious even without the orange and coconut that you could just make plain buns and everyone would eat them.

As an added bonus, we had (as aforementioned) half of the glaze, waiting to find a happy use. 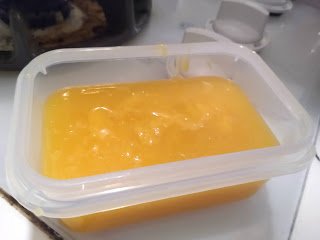 This glaze is so good that I would suggest using it over any number of desserts or between cake layers. I also plan to substitute in lemon juice and remake the graham-coconut layer cake with this filling in the middle. Unlike the runny disappointment of a lemon filling we tried last time, this is the perfect thickness.

But since I wasn't about to set out a layer cake when we already had this on the countertop, we soon discovered peanut butter and orange sandwiches. Judge all you want, but is orange glaze really any nutritionally worse than jelly? 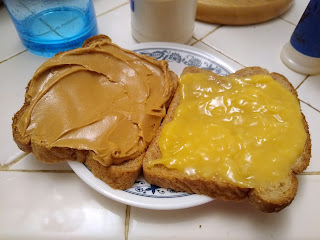 We also found that caramel-swirl ice cream (it accidentally landed in the grocery cart) with orange sauce is a match made in bliss. 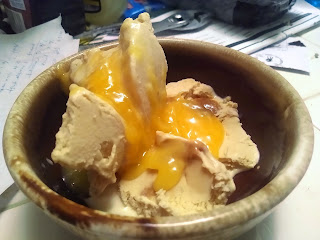 All of the parts of this recipe are delicious on their own. The bread is amazing if you bake without any of the citrus or coconut. The orange glaze is absolutely lovely. Of course, the coconut is delicious if you like coconut.  And all of it goes together in lovely orange coconut harmony.

I will note, however, that you will be using a lot of pots and bowls for this one. If you have a dishwasher, you might want to make sure that there's no more than a few plates and cups in it before you begin. If you must handwash everything, you should know that you're going to have quite the pile in your sink before you're done.