Towards the end of last year, we decided to run the oven up to temperatures rarely seen outside a pizza parlor and make cream puffs using Fanny Cradock's recipe. We noted that as straightforward as they are to make, you nevertheless get quite the arm workout from beating your ingredients into a smooth dough. We also noted that if you have saucepans that can withstand an electric mixer, you should definitely use it. Someone in the house, in the course of discussing why I hadn't been in a rush to make more cream puffs, said "I'm pretty sure the pots are stainless steel..." It turns out they are!

As with last time, it took only a few short minutes after we started to reach what Fanny Cradock called "the globule stage" of the recipe. The name is accurate. And here, as we try to force the eggs to mix into everything else, we set aside the spoon and bring out the power tools! 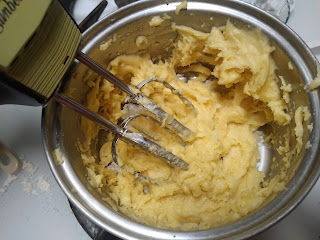 An electric mixer is not strictly essential for making choux paste (after all, we made our last round of buns without one), but it does mean you can have it ready to bake in two minutes or less. Or more correctly, in two minutes you will be ready to set the dough aside until it completely cools off. 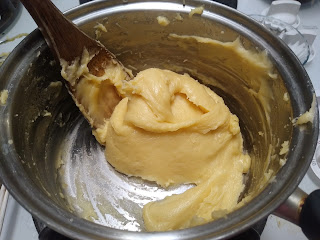 After seeing the last batch of cream buns puff up from reasonably-sized to custard steins, e made today's puffs extremely puny. In theory, they would inflate to the size we desired instead of turning farr too large. This also means that you can get a party tray's worth of puffs out of the seemingly small of dough. 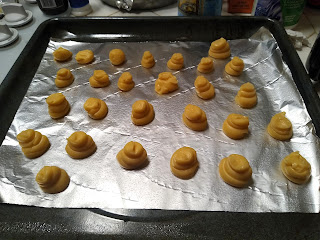 Sure enough, they puffed up to the size we had been hoping for.

I actually don't like people's insistence on using the French word for choux paste. French is not a common language in the United States. If you hear the name choux paste, all you get out of it is "something in that snobby language they use for fancy foods." Translating it to cabbage paste turns it into something that actually tells you what you get. Puff paste does exactly what the name promises, why shouldn't cabbage paste do the same? Also, cabbage is not a very loved vegetable in the US. I think it's charming that in other countries, people apparently say "these fancy desserts should look like cabbages." No one in this country thinks a cabbage is a visual ideal that your baked creations should aspire to.

Speaking of making one's pastries look as cabbage-like as possible, out of curiosity I shaped one of these into a ball instead of piping out a three-tiered shape like Fanny Cradock does. Can you tell which ones they were after they puffed up in the oven? And if so, do you think I successfully achieved cabbage perfection?

Now, a word about the filling for these. Last time, we just made custard and poured it in them. This was fine, but it did drip all over the shirt of anyone who ate one. We received a lot of custard complaints. We therefore decided to correct this batch of custard by tripling the amount of flour that went in it to thicken it. We ended up with what looked like a pot of mashed potatoes gone wrong. But at least it was thicker than last time. 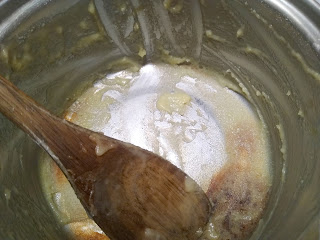 But I was not about to throw this out. If one were to carefully avoid scraping off the burnt stuff, the remaining custard tasted fine. We then brought out the blender to break it down again. Again, this is what we had before: 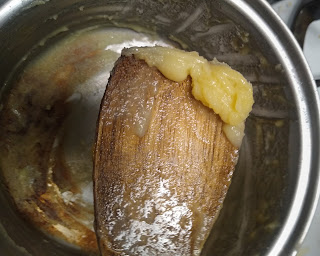 And even on the blender blades, you can see the perfect, smooth custard that we had after.

I know choux buns are right next to macarons (the fancy sandwich cookies, not the coconut ones) in the pantheon of fancy and hallowed French recipes. So many people go on and on about how difficult it is to make choux paste right, and they often mention a panade (whatever that is) and a thermometer. Surely, with such a laborious and difficult recipe, one would insist on using a homemade filling, regardless of how many saucepans are already stacking up in the sink, right? Wrong! As I've said one or seven times already, choux buns are so easy and cheap to make (albeit tedious) that I honestly don't think it's blasphemy to just use boxed pudding instead in these if you like it. It also means you don't need to use a blender to fix your stovetop mistakes. 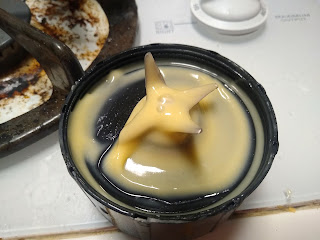 Now, sometimes the little baked poufs don't bake with a completely hollow cavity in them, though they rose and expanded beautifully. While this failure of technique may have caused you to get angrily fired from the kitchen at La Pâtisserie Très Chère, at home you can just carefully press the insides of the buns against the outer crust. I prefer just pushing the extra breadstuff to the sides over picking them out because otherwise the buns go from delicate to flimsy. Also, I think the buns are a little better if you haven't reduced them to thin shells by removing most of their innards. 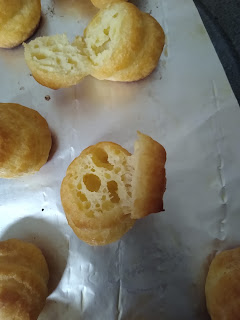 As you can see, in just a minute or so they are ready to accept a little bit of filling. Also, I emphatically recommend leaving a hinge on lids when you cut them open. The lids seem to love slipping off otherwise, and no amount of toothpicks with cute colored flags seems to keep them together. 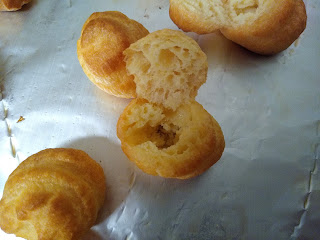 And so, with a bit of pudding in each one and some of the extra strawberry icing from the previous cake on top, these are lovely and finished! 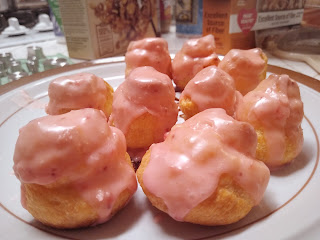 That picture makes them look a lot bigger than they are. If we step back a bit, we can see how dainty and cute they are. The paper plate may not be the best aesthetic match for them. But if you imagine I'd at least come up with a plain white one, the cream puffs on top look like charming little dessert poufs. 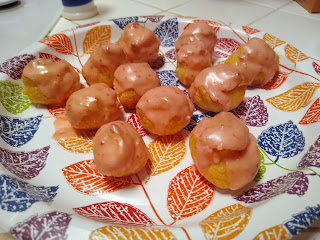 And this is why they're on a disposable plate! We're giving these away. I would like to proudly declare that I despise people who give away food and want the container back. We at A Book of Cookrye never, ever give away food with the expectation that someone will wash the container and remember to return it. Gifts of food should never come with chores attached. That is why our food parcels tend to look like this. 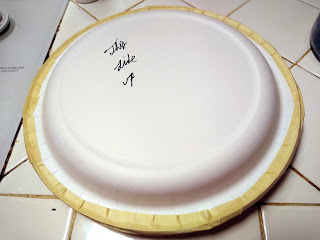 However, they do require a very hot oven. Therefore, unless you love giving your air conditioning a hard workout, you may want to make these when it's chilly outside.