It's been needling the back of my mind since our first adventure with ice cream bread. What happens if you use cookie dough ice cream? Before we proceed, let us reiterate the recipe:

Various people have tried separating out the frozen cookie dough pellets from the ice cream and plopping them onto a baking sheet with unexpected success. (Apparently they're a bit hard and crunchy like gingersnaps but surprisingly decent.) We at A Book of Cookrye wanted to know what happens if you attempt to make ice cream bread starting with this: 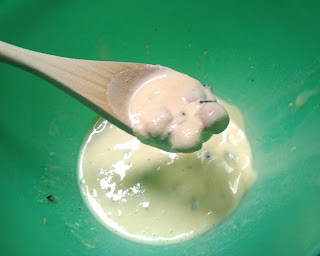 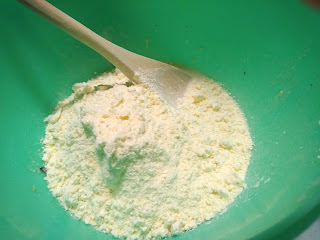 I rarely use cake mix, so I'm always a bit unnerved at how artificially perfect the color is. My yellow cakes never come out so uncannily yellow they look like paint samples, even if I slip in a few drops of food coloring. 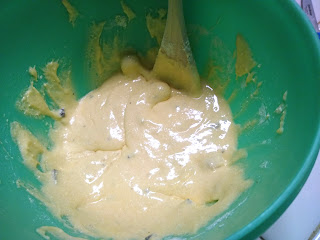 We don't have a cake pan small enough for this tiny allotment of batter, but we do have cupcake tins. So, let's go back ten(!) years and pretend that the mid-aughts cupcake mania still looks like it will never end. (Future generations will never understand just how big the cupcake craze was.)

For those who want to indulge in some recreational pedantry, here is a gastronomical conundrum. This recipe is ice cream bread, not cake. The recipe name says it's bread, ipso facto that's what it is. Therefore, by pouring the batter into cute little paper cups and baking them, are we making cupcakes or muffins? 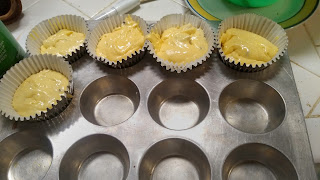 Some of the cookie dough balls that were right on the edge of the cupcakes/muffins (cuffins?) started to ooze out of these, turning our cookie dough inclusions into extrusions. 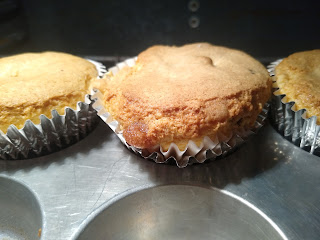 Before we lift these out of the pan, I would like to note that based on how much the paper towered over the pan, cupcakes have gotten bigger in the decades since this pan left the factory. 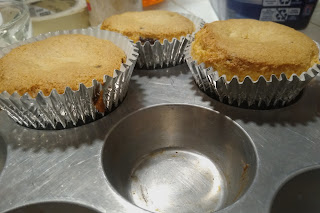 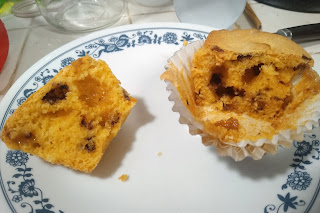 The cookie dough disappeared like marshmallows in a resurrection roll! I don't know what I expected, but I would never have even considered a complete disappearance. The remaining cookie dough residue was kind of gummy, but impossible to notice if you ate these without looking. The empty holes left behind by the disappearing cookie dough reminded me of ice candles (the ones where you fill the candle mold with ice cubes before pouring in the wax, leaving a lot of ice-shaped holes in the candle for the flame to flicker through).

The cupcakes themselves tasted surprisingly prefabricated for something that was still warm from the oven. Imagine a box of Entenmann's muffins that hasn't been sitting on the shelf for very long.

Because I didn't want a half-box of cake mix sitting in the refrigerator, I went ahead and baked the rest of it. 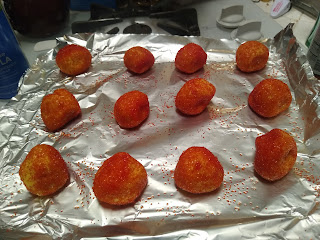 Did you really think I would make a cake out of the remaining powder? I've previously stated how (in my opinion) cake mix makes better cookies than cookie mix does- and also better cookies than cake. The resulting cookies were decent, but not the best thing I've ever put through the oven. As someone else put it: "They're addictive, but not very good."

The cookies tasted like something you got out of the pre-packaged snack aisle. They were decent, but if you want that industrial perfection, just buy a box of cookies and reduce the amount of bowls you'd have to wash. 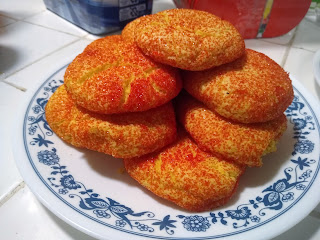 Today's recipe adventure was more fun in the making than it was in the eating. With that said, these aren't necessarily bad. They're just not any better than the muffins you could drop into your grocery cart when you're on the snacky-cake aisle. But if you or your friends would be amused at cupcakes with more holes than Swiss cheese, then your future should contain melted cookie dough ice cream and a box of cake mix. 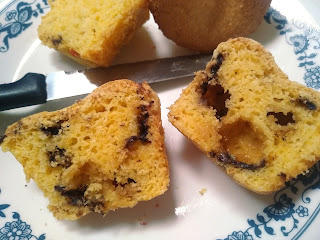